The spiced vanilla pronunciation: [ vaˈnɪlə; -ljə ]; Swiss and Southern German [ ˈvanɪl ] - ( Vanilla planifolia ) or real vanilla is an orchid plant . The name comes from the French vanilla from the Spanish vainilla ('small pod or pod', Latin for vagina ). Spiced vanilla is sold under the designations of origin Bourbon vanilla (from the islands of Madagascar and Reunion [formerly Bourbon]), Mexican vanilla and vanilla from Tahiti (compare Tahitian vanilla ). The plant has green-yellowish flowers and produces seed pods from which the spice vanilla is made.

The spice vanilla is an evergreen climber , the sparsely branched shoot reaches lengths of 10–15 m. The dark green stem axis is round in cross section and usually about 1, rarely up to 2 cm thick. The length of the internodes is quite variable and is 4–10 cm, sometimes more. The leaves are not or only very short stalked, are elongated or elongated-oval shaped, rounded at the base, pointed at the end or with a long, drawn-out tip. The leaf length is 8–25 cm, the width 2–8 cm. Opposite each leaf arises an aerial root , which is initially round in cross-section, but can attach itself flat and firmly to a surface when it comes into contact. As with many other epiphytic orchids, the aerial roots have a velamen radicum with which they can absorb water and the nutrients dissolved in it, store it and pass it on to deeper layers.

The inflorescence arises from the leaf axils in the upper area of ​​the plant, very rarely it sits at the end of the shoot. The inflorescence axis is slightly angular in cross section and measures 0.4–1 cm in diameter. It becomes 5–8 cm long, is slightly curved and has 6–15, occasionally 20–30  flowers . Each flower stands in the axilla of a small elongated to oval bract . The bracts are 0.5-1.5 cm long and 0.7 cm wide. The fragrant, yellowish-green flowers are waxy in appearance. They bloom one after the other within an inflorescence, with a single flower only being open for about eight hours before wilting. The ovary is slightly curved, 4–7 cm long and 0.3 to 0.5 cm in diameter; in cross section it is almost round. The outer petals ( sepals ) point to the front even when the flower is open, they are elongated to slightly spatulate, the ends are blunt and curved outwards, the length is 4-7 cm with a width of 1-1.5 cm. The lateral petals are similar to the sepals, they are slightly smaller and not as thick. On the outside, the central rib stands out as a raised keel. The lip becomes 4–5 cm long and 1.5–3 cm wide. Especially in the front area it is darker and clearer yellow than the other petals. At the base it is fused with the column for a while , and further forward the sides of the lip are turned upwards and envelop the column, the tip is spread out or folded down. The front edge of the lip is slightly wavy. Several rows of warty papillae run along the lip , the longest in the middle. It is still unclear whether these papillae represent a lining tissue or just serve to enhance the visual effect. In the middle of the lip is a tuft of hair directed backwards. The column is 3–5 cm long, slightly club-shaped towards the front and hairy on the underside. The capsule fruit (colloquially called "vanilla pod") is 10–25 cm long and 0.8–1.5 cm in diameter, it is not curved. When ripe, it jumps up along two slits and releases numerous shiny, dark brown to black seeds .

The fruit of the spiced vanilla is slightly poisonous if handled constantly. It can irritate the skin and have an allergenic effect.

Pharmacological effect: Workers involved in sorting and packaging vanilla may experience rashes, headaches and insomnia. Allergic and irritative contact dermatids are known in English as "vanillism". They usually occur due to work, i. H. for those people who have to harvest and pack vanilla fruits.

The consumption of vanilla-containing dishes (including vanilla ice cream) occasionally leads to urticarial symptoms and facial swelling in allergy sufferers. The contact allergens responsible for vanilla allergies are still unknown today. Apparently, neither vanillin nor compounds derived from it or closely related compounds such as vanillyl alcohol, ethyl vanillin , cinnamic acid , isoeugenol are the cause.

The origin of the spiced vanilla are Mexico and Central America. Mainly because of the aromatic ingredient vanillin in the capsules, which are black after fermentation , it was already known as a spice among the native inhabitants of Mexico, the Aztecs , under the Nahuatl-Aztec name tlilxochitl (= black flower). The Spanish conquerors brought vanilla to Europe . Since it only grew in Mexico, the Spanish had a monopoly on vanilla for a long time. Today it is grown in tropical areas around the world. The largest growing area today is Madagascar .

The flowers of the vanilla are pollinated by hand on plantations 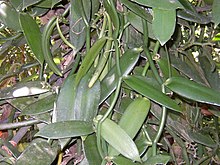 The commercial cultivation of vanilla takes place almost exclusively for the extraction of the spice vanilla , its fermented capsule fruit, which is traded as a vanilla pod . Attempts to plant and breed the vanilla outside of Mexico failed for a long time, as it is pollinated by certain species of bees of the genus Melipona and members of the hummingbird family , which only occur in Mexico and Central America . In other countries where these natural pollen carriers do not occur, humans have to take over their function.

It was not until 1837 that the Belgian botanist Charles Morren succeeded in elucidating the reproductive mechanism of vanilla and artificially pollinating its bloom in the greenhouse. In 1841 the twelve-year-old plantation slave Edmond Albius discovered a manual pollination process that is easier to carry out on Reunion . With this labor-intensive artificial pollination with the help of a wooden stick or stalk, which is still used today, a skilled worker creates around 1000 to 1500 flowers a day. Since this also increases the proportion of vanilla pods produced, it is always hand pollinated in plantations.

The island of Madagascar supplies up to 80% of the amount of Planifolia vanilla traded worldwide. Up to 2000 tons of vanilla pods are harvested here every year. Harvesting and processing are also time-consuming. The fruits have to be blanched , dried in the sun for weeks and then ripened in boxes so that they develop their typical aroma.

Bourbon vanilla takes its name from the long-standing main supplier of vanilla, the island of Réunion in the Indian Ocean , which was called Île Bourbon until the French Revolution and then again from 1810 to the February Revolution of 1848 . Today the main cultivation areas are Madagascar (the north of Madagascar provides over 50% of world production), the Comoros and, in third place, Réunion; Mexico only supplies around 10% of vanilla production. Other growing areas are Mauritius , Indonesia (Java), the Seychelles , Tahiti and Zanzibar . The proportions of world production fluctuate strongly due to the climate ( cyclones in Madagascar) and due to differences in quality and price.

The world's largest buyers include Coca-Cola and Pepsi-Cola , each of which buy around 40 tons.

The market price of vanilla has been subject to strong fluctuations for decades. It rose dramatically in the late 1970s as a result of a typhoon. In the mid-1980s, the cartel that had been in existence since 1930 and that had controlled vanilla prices and distribution was dissolved. The market price dropped to about $ 20 per kilogram. Typhoon Hudah devastated the cultivation areas in 2000. In connection with political instability, the vanilla price rose sharply until 2004, and then fell again in 2005 to around 40 US dollars per kilogram and below.

After ten years of low prices, there has been an only slow price increase since 2015, which accelerated sharply in 2016/17. At its peak, up to US $ 1,000 per kilogram was paid. After that, prices dropped again a little.

Diagram of the price development of Madagascar's vanilla exports. The extreme price increases around 2003 and 2017 are clearly visible.