The raspberry ( Rubus idaeus ) is a species of the subgenus Idaeobatus in the genus Rubus within the family of Rosaceae (Rosaceae). The diverse uses of the plant by humans are reflected in numerous regional folk names.

The raspberry bush reaches a height of 0.6 to 2 meters. The rods are covered with fine spines . The alternate leaves arranged on the stem axes are petiolate. The imparipinnate leaf blades consist of three, five or seven toothed leaflets.

Blossom of the raspberry

Between May and August, paniculate inflorescences are formed from the individual shoot axes . The hermaphroditic flowers are radial symmetry and five-fold with a double flower envelope . The flower base is strongly protruding. There are five sepals . The five free petals are white. The more than twenty stamens are free and fertile . There are free carpels .

The fruits that are red when ripe, and yellow or black when cultivated, are, contrary to what the common name raspberry suggests , botanically speaking not berries , but aggregate drupes that are formed from the individual carpels. In contrast to the blackberry , the fruit is only loosely attached to the flower base and can be easily pulled off. Depending on the variety, raspberries can be harvested from June until the first frosts in late autumn. Their main odor component is the raspberry ketone .

The raspberry is a deciduous pseudo-shrub. The upright shoot axes are newly formed every year from the wintering rhizome . They bloom and fruit in the second year (rarely in the first year of some cultivars) and die after the fruit ripens . In contrast to blackberries , the shoots do not take root at the tip. The thin, soft spines are not used for climbing.

The flowers are homogamous "bluebells with sticky pollen". The odorless flowers offer plenty of pollen and nectar ; they are therefore often visited by bees of all kinds (bee pasture) and butterflies. The nectar has 46% sugar. Flowering time is from May to August. Normal sexual reproduction takes place.

In addition, vegetative reproduction is possible through underground creeping shoots (root shoots). This makes the raspberry a typical clear-cut plant that can also spread very invasively in gardens and thus become a "weed".

In contrast to other types of the genus Rubus, the collective drupes easily detach from the flower base. Digestive dissemination by larger and smaller mammals and birds is possible. As a garden plant, the raspberry is also spread by humans. Fruit ripening is from June to September.

Like sloe and blackberry, the raspberry is home to 54 species of caterpillars .

The flowers and ripening fruits are visited by various insects 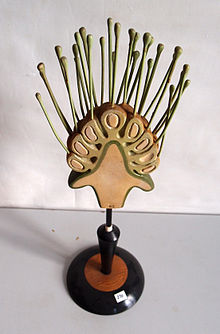 In the subalpine zone of the sub-Adriatic Dinarides, raspberries grow in groups in snow-affected depressions above the tree line; here in Opuvani do in the Bijela gora at 1600 m.

The wild raspberry is widespread in temperate to boreal Europe and western Siberia . In the Mediterranean zone, it becomes increasingly rare towards the south and is tied to the montane to subalpine areas of the mountains. In the Alps it rises to an altitude of around 2000 meters, for example in the Allgäu Alps on the Walmendinger Horn up to 1930 meters. There are naturalized occurrences in eastern North America, in Greenland and in New Zealand .

The raspberry appears as a forest pioneer on bare land . It prefers kali - and nitrate rich soils in sunny to partially shaded locations, for example on forest clearings and forest edges with high humidity and cool summer temperatures. Raspberries do not tolerate waterlogging because they are sensitive to root diseases.

In terms of plant sociology, the raspberry is a character species of the Rubetum idaei from the Sambuco-Salicion association in Central Europe.

The scientific name Rubus idaeus , first published by Carl von Linné in 1753, can be traced back to the De materia medica (written around 50 to 68 AD) by Dioscurides , but probably goes back to the Greek doctor Krateuas (around 100 BC). ) back. Pliny the Elder mentions the name in his work Naturalis historia (approx. 77 AD) in two places and writes that the Greeks called the plant "Idaeus rubus" because it would only grow in Ida. The nature of the likely Ida Mountains in Troas named because only these mountains in the circulation area of raspberry is, while the way in a wide radius of as "Ida" called Psiloritis -Gebirges Crete missing.

For the term raspberry there were and are various names in the vernacular. The word raspberry was often modified in such a way that the resulting forms are based on terms such as honey, bumblebee or Imme. The consonant H of the raspberry was also often omitted. Examples are Imbere (Eifel), Imper (Tyrol, Alsace), Himmere (Göttingen), Humbel (Bergisch), Raspberry Berry (Silesia), Hindlbeer (Upper Austria), Hummelbeer (Vorarlberg), Holbeer (Bavarian-Austrian, Swabian). The Swiss names Haarbeeri and Sidebeeri refer to the silky hair on the underside of the leaves and the fruits. The Swiss Association for Vegetarianism still uses the term hollow berry as a synonym on its homepage. This is also an older German name, as well as catberry, grudge berry, witch's blackberry, mollberry or ambas etc.

Raspberries at the weekly market

The raspberry has been known as a medicinal plant since ancient times . The content of vitamin C, potassium and fruit acids is said to promote the immune system and wound healing. In the Middle Ages it was mainly cultivated in monasteries. As early as 1601, Clusius distinguished between red and yellow species.

A basic distinction is made between two types of raspberry: summer raspberries and autumn raspberries (remontant varieties). Remounting varieties bear fruit several times a year. Mostly - for operational reasons - all shoots of autumn raspberries are cut off after the harvest, which leads to new shoots in the following year and a one-off harvest in autumn. In the case of summer raspberries, the new shoots are left and a harvest is brought about at the end of June / beginning of August. Important raspberry varieties are:

Ripe raspberries on a raspberry bush

Raspberry harvest and cultivation area in Germany from 2007 to 2011

Since the seeds of the raspberry do not germinate within a set period, accelerated germination is used in horticulture .

Single-bearing raspberries (summer raspberries) are usually pulled along a wire frame. Around ten fruit rods per meter are left and tied to the wire. During and after the fruit ripens, new rods grow from the roots. Summer raspberry crops are pruned immediately after harvest. The removed rods are cut off at ground level and the new shoots tied up. Remounting raspberries (autumn raspberries) are cut off at ground level after the harvest (November). New fruit canes form in spring, which in turn produce fruit in autumn. If the removed rods are left over the winter, a small early yield (June) is also possible. However, this should be canceled three weeks after the start of the harvest in order not to endanger the late yield. Raspberries require an even supply of nutrients with sufficient water supply. It is recommended to cover the row of plants with mulch material such as straw or bark compost. In 2011, 4778.4 tonnes of raspberries were harvested on farms across Germany on an area of ​​1118 hectares. This corresponds to a yield of 4.27 tons per hectare.

The ten largest raspberry producers in 2018 were:

The most important disease in raspberries is Phytophthora (red root rot), which leads to reduced growth of new shoots and, in the long term, to death of the cane. Another important disease is rod disease, which can be traced back to several pathogens. While Phytophthora can only be prevented by an optimal soil structure, the rod disease can be combated with fungicides. Pests on the raspberry are aphids , raspberry flies , raspberry gall flies, raspberry beetles and spider mites . Viral diseases that can cause dwarfism or produce dwarf crops are another risk in commercial cultivation.

Stone core finds in pile dwellings from the Neolithic show that raspberries have been important fruit plants since the Stone Age . They were not cultivated until the 16th century. The plant is a popular garden plant for its fruits. The fruits, which are extremely healthy due to their high vitamin content, are often consumed raw or used in a variety of ways in the kitchen , for example as jam , jelly , compote , juice , cake topping, cold bowl or fruit groats . In 2011, 82.9% of the agriculturally harvested fruits were used as dessert fruits, 7.8% as industrial or processing fruits. 9.2% were not marketed. In beekeeping , raspberries are a valued sideline due to the high sugar content (36–70%) of their nectar and its high sugar value (0.18–3.80 mg sugar / day per flower) . The berry fruit is also used to flavor pure alcohol. The resulting spirit is called raspberry spirit . The berries do not ripen after harvest. They are therefore one of the non-climacteric fruits .

Because of their low sugar content, raspberries are particularly low in calories.

Medicinal drugs are the dried raspberry leaves, Rubi idaei folium (DAC) and raspberry syrup prepared from the fresh fruits - Rubi idaei sirupus. The active ingredients are tannins ( gallotannins and ellagitannins ), flavonoids and vitamin C in the leaves , and minerals , vitamins , fruit acids , coloring glycosides and flavorings from around 100 components in the fruit .

The leaves are used in folk medicine like the leaves of blackberries , because of their tannin content as a tea for mild diarrheal diseases, to gargle for inflammation in the mouth and throat, and more rarely for washing with chronic skin diseases. Fermented raspberry leaves can be reminiscent of the taste of black tea , so they are often found in home tea blends. The syrup is used to improve the taste and color of medicines, since ancient times it has been given (diluted) as a thirst-quenching drink for people with a fever.

In naturopathy , fruits, leaves, flowers and roots are used. For example, the berries are cooked or eaten raw, or the various parts of the plant are used as teas, tinctures or baths.

The plant's effects range from anti-inflammatory, blood-purifying, astringent to calming, antipyretic, diuretic and sweaty. It is used, among other things, for a weakened immune system, rheumatism, sore throat, mouth ulcers or digestive problems.

Raspberry leaf tea can have a cycle- regulating effect and reduce menstrual cramps and an existing premenstrual syndrome (PMS).

As an old home remedy , raspberry leaf tea is used to prepare for birth . Among other things, it should induce labor and serve to widen the cervix and cervix . However, the effect has not been scientifically proven and little research has been done on side effects.