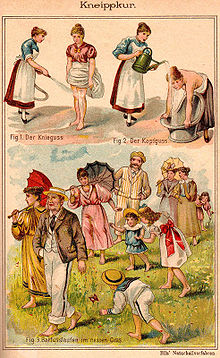 The Naturopathy , formerly physiatrist called, is a medicine that especially on dietary and physical remedies , sets based on a natural modern lifestyle and special value (apart from medicinal plants) largely on drug dispensed. The term naturopathy thus describes a spectrum of different naturopathic methods that do not use any technological aids and are intended to activate the body's own capabilities for self-healing (spontaneous healing). For this purpose, these methods preferably make use of the means or stimuli occurring in nature .

Naturopathy is often used to describe areas of alternative medicine and, in the narrower sense, parts of complementary medicine (i.e. to the scientifically unrecognized procedures that complement medicine). The doctor Christoph Wilhelm Hufeland is considered an important pioneer . In 1888 Friedrich Eduard Bilz published the standard work of naturopathy with his Bilz book .

The following examples show that this definition is fraught with problems: Vaccination with a genetically engineered hepatitis B vaccine has a preventive effect by activating the body's own immune system , or penicillin is a substance of natural origin. Neither of the two examples counts to naturopathy despite the fulfillment of the above Definition criteria.

The following naturopathic treatments are generally included in classic naturopathy:

The following alternative medicine methods are often referred to as naturopathic:

Most naturopathic and alternative methods have a so-called holistic approach, that is, they try to rebalance the disturbed harmony of the entire organism, whereby they claim not only to cover the body. They create the conditions and stimulate processes that enable the organism to recover from itself. Therapy goals are the stimulation of the self-healing powers through natural effects of natural remedies as well as the instruction and support for the assumption of personal responsibility by the patient.

In the Hippocratic understanding, which was the basis of academic medicine in antiquity and the Middle Ages (cf. humoral pathology ), nature was understood as a vital force and a healing force . The patient's recovery was brought about by nature; the doctor was only the practitioner: Medicus curat, natura sanat .

The first (alternative medicine ) naturopathic movement in Silesia was initiated by the Silesian preacher monk and poet doctor Nicholas of Poland (also known as Niklas von Mumpelier) from the Dominican monastery in Krakow, whose therapeutic concept contained antigalenic and antischolastic content. The term naturopathy was first used in 1839 by Johann Baptist Gross in the 3rd edition of his work The cold water as an excellent means of transporting health and an excellent remedy for diseases :

“Nowadays it is the conviction that, as a rule, the beneficent goal can be reached not so much through the multitude of artificial compositions of all possible natural substances and devices, as through simple gifts and mainly through the purposeful guidance of the natural force. For this reason, a large part of the doctors have devoted themselves to physiatrics (naturopathy), others themselves to hydriatics (cold water medicine). "

- Bernhard Uehleke : The historical and conceptual precursors of "naturopathy" in the 17th and 18th centuries.

In 1846 Heinrich Friedrich Francke, who published under the pseudonym JH Rausse and was important for the development of naturopathy, also used the word naturopathy. Lorenz Gleich (* August 1, 1798; † March 3, 1865) created a definition and nomenclature of naturopathy in 1848 and, in addition to water, names "appropriate diet, exercise, air, light and warmth with the exclusion of all so-called medicines".

One approach was the propagation of water for healing purposes in hydrotherapy. Around 1848, Vinzenz Prießnitz first described the combination of active and passive movement therapy, air, bath and water applications as well as simple mixed food as a natural healing method . Johann Schroth combined the water applications with fasting in the Schroth cure . Uncompromising anti-medication and opposition to vaccinations were later characterized by movements around the magazine Der Naturarzt (whose editor-in-chief Theodor Hahn worked) or the German Association of Associations for Health Care and Non-Medicinal Healing Practices .

The form of hydrotherapy (see: Kneipp medicine ) made popular by the pastor Sebastian Kneipp gave up the principle of non-drug use. Many other medical laypeople, but also doctors, designed other natural healing systems. The Bavarian military doctor Lorenz Gleich (1798–1865) coined the term naturopathy as a collective term for the natural instinct doctrine ("instinctively correct behavior of people in dealing with health and illness"), natural diet ("instinct-guided natural way of life") and naturopathic methods . Some doctors like August Bier advocated overcoming the growing mistrust between naturopathy and scientific medicine.

The alternative practitioner Arthur Lutze (1813-1870) combined the knowledge of naturopathy with homeopathic elements. In his clinic in Köthen he treated thousands of patients with self-developed wellness healing practices, baths and vegetarian diets . His book Rules of Life in Natural Medicine achieved 64 editions. Another popular naturopathic work was The New Healing Method by Maximilian Platen.

Around 1900 many supporters of naturopathy were to be found in the metropolitan workforce, but above all in the middle classes. Naturopathic associations, Prießnitzbünde and Kneipp societies were part of the social movement that became known as life reform . In 1906, under the name and with the ideas of his teacher Ernst Schweninger , Bismarck's personal physician , the physician Emil Klein laid the foundations for the following efforts to establish naturopathy with the book The Physician . Even the treatment of sexually transmitted diseases was attempted with naturopathic methods (in addition to the first chemotherapeutic approaches - rich in side effects - and before the development of modern antibiotics). The popularity of the naturopathic movement was partly taken up by National Socialism . The advocates of Nazi medicine often invoked traditional methods and ways of thinking that served as a background for naturopaths, and tried, among other things. a. to develop a New German Medicine from it.

Basically, a distinction must be made between medical use, treatments according to the Heilpraktikergesetz and self- treatment . Naturopathic methods are quite widespread, especially in the established medical profession and in rehabilitation medicine . In Germany around 14,000 doctors are organized in medical associations for naturopathic treatment. For comparison, there are 28,000 in acupuncture , 8,000 in manual medicine , 6,000 in homeopathy and more than 5,000 in other methods of complementary medicine .

In Germany, after completing specialist training, there is the opportunity to acquire the additional designation of naturopathic treatment recognized by the medical associations . To acquire the additional qualification, four courses with a total of 160 teaching units as well as a 12-week internship with an authorized doctor are required. The practice observation can be replaced by the 80 hours of case seminars including supervision.

The training includes the acquisition of knowledge, experience and skills in balneotherapy, climate therapy and related measures, exercise, breathing and relaxation therapy measures, massage treatment and reflex zone therapy measures including manual diagnostics, the basics of nutritional medicine and fasting therapy, phytotherapy and the use of others Medicines made from natural substances, order therapy and the basics of chronobiology, physical measures including electro and ultrasound therapy , the diverting and retuning procedures, healing obstacles and basics of neural therapy .

Training at university facilities for naturopathy

In 2003, with the revision of the licensing regulations for doctors, the cross-sectional area of ​​rehabilitation, physical medicine and naturopathic treatment was introduced as a binding part of teaching in the clinical training section. This was the first time that naturopathic and complementary medical content became relevant for the exam. There are currently several university facilities for naturopathy and complementary medicine as well as other naturopathic research institutes in Germany:

In Germany, specialists have the option of obtaining the additional designation of naturopathic treatment recognized by the medical associations . To acquire the additional qualification, four courses with a total of 160 teaching units as well as a 12-week internship with an authorized doctor are required. The practice observation can be replaced by the 80 hours of case seminars including supervision.

The further training includes the acquisition of knowledge, experience and skills in

In addition to special, important sub-areas: