This article covers diet and lifestyle. For the compensation payments to politicians for membership in Parliament, see Membership Compensation .

The term diet comes from the ancient Greek δίαιτα díaita and was originally used in the sense of “lifestyle” / “way of life”. The dietetics deals still scientifically with the "right" diet and lifestyle. In German-speaking countries , the term refers to certain diets and diets that are intended either to gain or lose weight or to treat illnesses. Colloquially, the term in Germany is often equated with a reduction diet (reduction diet) for weight loss. It is therefore a synonym for the slimming diet.

Since Hippocrates , a special diet for humans has been called a diet , in which a special selection of foods is consumed over the long term or permanently .

In German-speaking countries, the diet is either a short-term change in diet for weight reduction (e.g. in the case of obesity ), in some cases also for weight gain (e.g. in the case of anorexia ) or a longer-term or permanent change in diet to support the treatment of an illness (e.g. B. in celiac disease , lactose intolerance , fructose intolerance ).

Fasting , on the other hand, means temporarily avoiding food for religious reasons ( Ramadan in Islam , pre-Easter fasting in the Christian Church ) or health reasons ( therapeutic fasting ).

Every form of diet, whether it is used for weight reduction or as a supportive disease treatment, is based on a decrease or increase in the relative proportion of one food component ( carbohydrates , fats , proteins , vitamins , minerals and preservatives ) compared to the others and / or a decrease or increase in the amount consumed Total amount of energy (see: Physiological calorific value ) and, if applicable, a balanced change in fluid intake.

Cognitive behavior therapy , which is used by psychologists in clinics to treat obesity, takes a more holistic approach . In this method, dysfunctional behavior routines and eating habits are identified and retrained. If you are very overweight and have eating disorders, it is considered to be the most sensible method of weight loss in the long term. 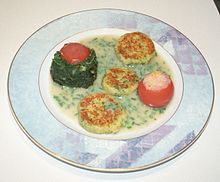 Example of lunch with a reduced diet

A weight loss diet aims to reduce body weight. There are numerous reduction diets, some of which differ considerably in their methods. Only a few diet forms have been scientifically verified. The development and promotion of reduction diets is not only subject to changes in scientific knowledge, but also to fashions and world views . Some forms of diet are even considered hazardous to health in medicine .

According to the recommendations of the German Society for Nutrition and the German Society for Nutritional Medicine , reduction diets should only be given for a short time (and in extreme forms only under medical supervision). The general consensus is that a reduction diet can only be successful in the long term if it is followed by a permanent change in diet in which the body's energy balance is balanced. H. in which no more energy is supplied through food than the body needs. A change in life towards a full diet and increased physical activity is recommended. If you relapse into old eating and living habits, your body weight usually rises again , the so-called yo-yo effect , because you fall into old eating habits that are not adapted to the new lower body weight.

There are numerous diets with different conceptions. These are called, for example, low-carb , low-fat , food combining or glyx diet . In a weight loss diet, lowering your carbohydrate intake is just as effective as lowering your fat intake.

According to a study carried out on mice by the German Institute for Nutritional Research in 2005, there is a connection between the consumption of fruit sugar (fructose) and obesity, which is not based on increased energy intake, but on the fact that fructose influences metabolic activity and in this way the Accumulation of body fat favors.

The Selfish-Brain-Theory , which also contains an approach to explain obesity , does not fundamentally question the short-term effect of reduction diets, but does question their long-term success.

Diets are used as a single measure or in addition to medicinal and possibly surgical therapy for the treatment of diseases . Nutritional medicine deals with the development of effective nutritional strategies .

Until the 1980s, almost every disease had its own diet. Nowadays, for most diseases, as well as for the general population, a possibly modified, lacto-vegetarian wholefood diet (see above) in connection with physical activity is recommended. Particularly in the treatment of diabetes , there has been a paradigm shift since the 1990s , which led away from a very strictly regulated diet to an almost complete release of dietary recommendations (“ energy-reduced mixed diet ”).

The diet recommendations are subject to constant, scientifically justified changes and are set out in guidelines of the medical specialist societies such as B. published by the German Society for Nutritional Medicine. Disease treatment diets should be carried out under medical supervision, especially in the initial phase.

Examples of diseases in which a diet promotes healing or improves the course are:

For serious illnesses such as cancer , diet can only be a supportive form of therapy. In eating disorders one is psychotherapy necessary to their company a diet therapy can take place.