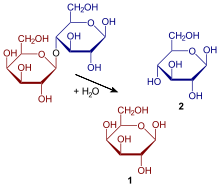 Splitting of milk sugar into galactose (1) and glucose (2).

All (healthy) newborn mammals form the enzyme lactase during suckling ( infants during breastfeeding ) , which splits the unabsorbed disaccharide lactose into the usable simple sugars D - galactose and D - glucose . For this purpose, lactase is formed in the thin intestinal mucosa (especially in the jejunum ) and is a component of intestinal juice ; it enables the newborn to use the lactose-rich breast milk as the main source of energy.

In the course of natural weaning from breast milk, lactase activity drops to around 5–10% of the activity at birth. This applies to humans and all other mammals. Only in populations that have been dairy farmers for a long time has a mutation prevailed which means that sufficient lactase is still produced in adulthood; this is known as lactase persistence. This is probably due to the fact that the higher lactase activity offered a selection advantage (minerals, nutritional value) for these groups.

In the case of insufficient lactase activity, unsplit lactose reaches the large intestine in humans, where it is absorbed and fermented by intestinal bacteria . Lactate (the salt of lactic acid ) and the gases carbon dioxide (CO 2 ), methane (CH 4 ) and hydrogen (H 2 ) are usually formed as fermentation products shortly after consumption . The gases lead, among other things, to a feeling of fullness, pelvic pain, flatulence and the short-chain fatty acids which are also formed, to nausea and vomiting. The osmotically active lactic acid causes water to flow into the intestine with diarrhea (osmotic diarrhea ). In Asia and Africa, the lack of lactase persistence affects most of the adult population (90% or more), in Western Europe, Australia and North America it is 5–15% (in fair-skinned people).

Similar symptoms occur in people who are intolerant to fructose , known as fructose malabsorption ; There are also similarities with irritable bowel syndrome .

Lactose intolerance can have several causes:

A self-diagnosis of lactose intolerance can be carried out with a test sequence:

The diagnosis is often ambiguous because there is only incomplete intolerance. In the usual form, the intolerance increases in the course of life, not so with the congenital lactase deficiency.

The following tests are more complex:

Lactose malodigestion does not necessarily lead to lactose intolerance

Clinical studies have shown that the primary lactase deficiency (non-persistence) and the resulting digestive weakness for milk sugar (lactose malodigestion) do not necessarily lead to the known symptoms of lactose intolerance. Most people with primary lactase deficiency can tolerate up to 12 g of lactose without symptoms, which is roughly equivalent to a glass of milk (200 ml). Of lactase deficiency test persons with significantly increased breath hydrogen after ingesting 25 g of lactose, about half tolerated this amount without symptoms. There are also people who digest lactose well but still show symptoms of intolerance, as well as people with a lactase deficiency whose symptoms persist even with lactose-free milk. Although the activity of intestinal lactase is not increased by continuously ingesting milk sugar, it can reduce both the breath hydrogen and the gastrointestinal symptoms. Adjustments in colon functions ( motility , transit and pH value) and an associated reduced perception of symptoms, also as a result of an altered metabolism of the colon flora , offer a likely explanation. Various probiotic, but above all live, conventional yoghurt cultures support lactose digestion and reduce the occurrence of gastrointestinal symptoms.

The effects of the lactase deficiency can e.g. B. can be reduced to a minimum by changing the diet to low or lactose-free foods. There are alternatives in the form of various milk substitute drinks , some of which are also enriched with additional vitamins and calcium . In addition to soy milk , grain or almond milk is available. There are also lactose-reduced dairy products, including milk, but also cheese, yoghurt, cream, quark and more. Another possibility is to supply the enzyme lactase from the outside in the form of chewable tablets or capsules through appropriate pharmaceutical products from the drugstore or pharmacy. However, the effectiveness of these supplements has not been proven beyond doubt.

Milk sugar, on the other hand, is added to many food products, such as breads, cereal bars, ready meals, seasonings, sausages, marinated meats, doughs, candies, ice cream, chocolate and instant products such as sachet soups. One reason for this is the “mouthfeel” desired by the food designer , which has a positive effect on the taste. Most of those affected, however, can tolerate smaller amounts of lactose with almost no symptoms, so that it is not necessary to avoid it completely. Since November 25, 2005, new regulations for the labeling of allergenic food ingredients have been in effect ( Federal Law Gazette I p. 2896 ). The labeling requirement also includes milk and milk components including lactose. Also, functional food and drugs , including birth control pills may contain lactose as an excipient, but in an absolutely negligible quantity.

Fermented milk products, including all sour milk products , cheese and quark, contain z. T. the enzyme lactase by nature, so that only very small amounts of milk sugar remain. This is mainly related to the production process, in particular the amount of bacteria added to the milk, which produce the enzyme lactase and thereby break down the milk sugar, as well as the maturation process and the duration of cheeses and yoghurts. In the case of cheese, the following generally applies: the longer the ripening process, the lower the lactose content.

It often happens that those affected strictly avoid milk and dairy products as a result. Whether or not there is a critical level of calcium deficiency depends on the balance of the other food. Some sources report that lactose intolerants are exposed to an increased risk of osteoporosis . The reason given is the lower consumption of foods containing calcium. With an overall balanced diet, a calcium deficiency is hardly to be expected.

From a 2007 study of the Mainz anthropologist Joachim Burger shows that lactose intolerance adult people a phylogenetically 's original property of the people that that is the ability to digest, even as an adult lactose problems, a relatively recent genetic innovation is. Together with British colleagues, Burger had examined nine European skeletons from the Neolithic and Mesolithic (7800 to 7200 years old) and, while analyzing their genes, discovered that none of these individuals was able to digest milk. On the other hand , a 1500 year old skeleton from the Merovingian period analyzed for control has the genetic modification so that this individual was able to digest lactose. A DNA analysis of the glacier mummy known as Ötzi also revealed that the man, who died around 5000 years ago, was lactose intolerant. The ability of adults to digest milk in Europe only spread in parallel with the expansion of agriculture and after the introduction of animal breeding, which has been taking place here for around 8,000 years. In the genome analysis of 18 skeletons from a medieval cemetery in Dalheim , published in 2013, 13 of them (72 percent) had the genotype for lactase persistence, which corresponds to today's level in Germany and Austria. In October 2014 a study of the prehistoric inhabitants of the Pannonian Plain was published ; with the result that the adjustment process took many thousands of years. 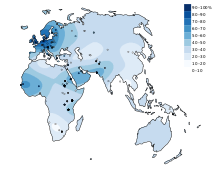