A Middle Stone Age (scientifically Mesolithic after ancient Greek μέσος mésos "middle, middle" and λίθος líthos "stone") is only defined for post-glacial Europe. The trigger was the reforestation of Central Europe at the beginning of the Holocene around 9600 BC. New living conditions set. The people had to learn to hunt standing game in the forests instead of the disappearing big game of the cold steppes and to intensify the fishery . The Mesolithic was ended by the expansion of the productive economy (agriculture and animal husbandry) of the Neolithic .

In the Mediterranean region, the term “ Epipalaeolithic ” is used much more frequently alongside the term “Mesolithic” . While in North Africa the European Mesolithic and the Upper Palaeolithic are summarized as the "Epipalaeolithic", the Mesolithic appears occasionally, but then specified in combined terms such as the " Khartoum-Mesolithic ". For western Anatolia both “Mesolithic” and “Epipalaeolithic” are common. In the case of spatial representations, the term is used more as a means of temporal classification, without hiding a lifestyle that was specific to Europe and a few West Asian areas due to their ecological conditions and the continued existence of various hunter-gatherer societies .

The term Mesolithic , which is limited to western Eurasia, was introduced by Otto Martin Torell in 1874 and by Hodder Westropp in 1866 . It is mainly used in Central and Northern Europe.

The Central European Mesolithic is divided - mainly on the basis of so-called microliths  - into:

The end of the Mesolithic Age is associated with the appearance of the first rural cultures in Europe. These occurred earlier in the south than in the north: 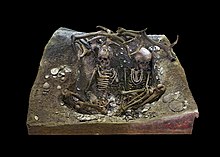 Burial of two women on the Île Téviec , dating back to between 6740 and 5680 BC. And is on display in the Toulouse Museum.

Mesolithic burials are rather rare, but some burial grounds are known from the late Mesolithic, especially in Denmark and southern Sweden (Skateholm, Vedbaek-Bogebakken). On the islands of Île d'Hœdic and Île Téviec in the Morbihan department (France) even stone slabs were used as grave borders. There are grave fields with individual burials lying on their backs, but also sitting (for example Olenij Ostrow, Karelia ). Early Mesolithic human remains were discovered in the leaf cave near Hagen , which are comparable to cave finds from Belgium and France.

A feature of the late Mesolithic are cranial burials , such as B. in the Great Ofnet cave near Nördlingen , in the Hohlenstein barn in the Lonetal and in the cave ruins "Hexenküche" on the Kaufertsberg near Lierheim ( Donau-Ries district ).

A special feature is a Mesolithic grave discovered in 1962 on the vineyard, near the Groß Fredenwalde district of the municipality of Gerswalde in the Uckermark district in northern Brandenburg. The remains of six individuals (three adults and three children) were found there. Mesolithic graves with a comparably large number of deceased are known only four times in Europe. In 2014, an unusual 7,000 year old burial was found on the vineyard. A young man about 1.60 m tall was buried upright up to his knees in a pit, and only after his torso had collapsed was the burial sealed with a fireplace. This burial disrupted an older child's burial and in the same year a small child's burial was recovered nearby. The various burials suggest that the oldest burial ground in northern Central Europe was created on the vineyard.

In Europe, more than 74 out of around 2100 people were buried in a seated or semi-seated position ( Ms. von Bäckaskog ). Another 31 graves may have contained seated burials. In Scandinavia in particular, this type of burial led to the Neolithic pile of bones in megalithic structures being interpreted as seat burials.

The so-called microliths , tiny projectiles made of flint and other raw materials, are characteristic of the epoch . A distinction is made between microliths made up of special, very small blades (microblades) and geometric microliths, which were produced by deliberately breaking and then retouching larger blades. In Northern Europe, shanked flint axes , so-called core and disc axes , were used.

The first daggers (knives with two-sided edges) preserved with organic shafts are documented from the Mesolithic . A dagger that has been wrapped in bast and made of a large flint blade retouched to a point on both sides is available from the Nizhnye Veretije site in northern Russia , with radiocarbon dates of the find layer from around 8000 BC. At the Olenij Ostrov site in Karelia , an approximately equal-old “bone dagger with glued-in flint blades” was found.

Because of the storage of the remains found in peat bogs , there are many archaeological sites an excellent organic preservation of artifacts , such as fishing nets raffia (reference Friesack ), arrow shafts made of pine and hazel (reference Duvensee) , fish traps , birch-bark vessels, beef floors (reference Duvensee) and net swimmers . Fishhooks were made from deer antlers (sites Bois-Ragot, Pont d'Ambon, both France) or bone. Bernhard Gramsch lists 38 fishhooks made of organic material that were found in the Havelland west of Berlin. The specimen from the Kleinlieskow district (lignite open- cast mine Cottbus -Nord) was also made from bones.

Dugouts and paddles are used several times. From Friesack ( Brandenburg ) and Northern Russia, arches made from different coniferous woods are documented. The so-called “guard arches” are permanently installed arch traps.

After camp sites were already inhabited for a long time in Gravettia (e.g. in Dolní Věstonice and Pavlov ), sedentariness generally increased somewhat in the Mesolithic period. The reduced tail area of ​​the hunters and gatherers can be proven, among other things, by the origin of the raw flint material. The groups from the Mesolithic period used several living spaces. Structures that point to wind screens and huts were found on Mesolithic excavation sites . The more common windbreak structures are characterized by a few post holes (arranged in a straight line or in an arch). At Mount Sandel (about 6960–6440 BC), Ireland, a large number of post holes indicate a solid building. Presumably, the Morton site in Scotland (4700–4300 BC) was repeatedly inhabited, which suggests rows of holes for posts or bars, which presumably had windshields.

Sites with remains of stone walls and foundation-like stone setting were discovered in Norway north of the Arctic Circle . In Tverrvikraet near Gamvik, in the province of Finnmark , the remains of a small rectangular house were found. The remains of a 6,000–4,000 year old house were found on the island of Träna . Post holes on the inside of the walls and a central fireplace do not allow any other interpretation. At the Varangerfjord in Norway near the border with Russia, circular arrangements of post holes were found, suggesting pit houses and tents, later Gressbakken houses . The approximately 8,500 year old Tingby House in Sweden is considered Scandinavia's oldest house. A reconstruction is close to the site on the site of a branch of the Län Museum in Kalmar .

In Denmark and Northern Germany, camp sites of the Maglemose culture were excavated (Holmegård IV, Sværdborg I and Ulkestrup Øst I), on which the remains of the hut floors, which consisted of interwoven strips of bark and split tree trunks, were still preserved. In Ulkestrup Øst I, the huts had a rectangular or trapezoidal floor plan and areas between 6.25 and 24 m². The roofs and walls were made of birch twigs and / or reeds. In Holmegård IV, double floors made of birch bark indicate repopulation or repairs; the places were apparently used over a longer period of time. Sværdborg I shows problems with the interpretation. One in nine huts was clearly older than the others. For the remaining eight, it could not be determined whether they were built simultaneously or one after the other.

A larger construction was found under the shell pile at Moita do Sebastião in Portugal, dating from 5350–5080 BC. An open semicircle of 61 post holes suggests a protective structure against the north winds. Pieces of clay with grass prints found nearby point to a roof made of rushes and stalks of sweet grasses (gramineae) that was coated with clay. Cooking pits were also found.

The main reasons for the change in diet were the migration of large herd animals and the better availability of collective goods (fruits, mussels, etc.), but also improved techniques for catching small animals and the strong development of fishing . The hunt for standing game takes place as the large herds of the Paleolithic such as reindeer , saigas and wild horses have migrated. The prey spectrum of the Middle Stone Age consists mainly of forest dwellers such as red deer , roe deer and wild boar (see Hohen Viecheln residential area ). In addition, the hunt for fish, birds and small animals has been proven. On the coasts of northern central Europe, the Congemose culture (6000–5200 BC) produced the first Køkkenmøddinger (kitchen garbage heaps), which are more numerous on the Atlantic coast.

The hazelnut made an important contribution to nutrition as early as the early Mesolithic . The extremely rapid spread in this age is associated with the spread of humans, who consciously or unconsciously promoted the multiplication of the hazelnut through the establishment of hazelnut stocks. This could be the first cultivation of a food in Europe, but this cannot be proven. Thick packets of nutshells from the Duvensee site , specialized roasting sites for processing extensive nut stocks, nutcrackers and modeling of the extent of the early Holocene nut use prove that these could have exceeded the yields of early arable farming.

The Mesolithic was characterized by the receding of the ice of the Vistula Glaciation in Northern Europe and the associated rapid warming of the climate during the Preboreal . In the areas that were previously determined by glacial tundras , first light, then increasingly dense forests developed, as isopole maps show. The mixed oak forest of the Atlantic followed the mixed pine and birch forest of the Boreal with the immigration of warmth- loving hazel species . The settlement limit shifted to the north. The sea level rose between 9600 and 5000 BC. By almost 100 m.

The works of art include rock art and small art in the form of ornate bone and antler tools. There are human figures and elk scepter made of antlers from the burial ground at the Olenij Ostrow site ( Karelia ). Overall, the Mesolithic is noticeably poor in depictions of people.