As the Copper Age or Copper Age (for Greece and Anatolia often: Chalcolithic from Gr. Χάλκο- 'made of ore, brazen, copper'; for Eastern Europe often Aneolithic from Latin a (h) ēn (e) us , made of bronze, brazen ') or Politics from Russian spelling. In Egypt, Southeast Europe and they called the Near East and also in the German-speaking and Scandinavian-British prehistoric science of a period between the Neolithic and the Bronze Age , in which the copper mining and basic techniques of metallurgy were invented. Since copper technology was only adopted over thousands of years in different regions, the term "copper age" can only apply regionally.

First copper in the Middle East and Europe

Access to the raw material copper was dependent on local deposits. The Archeology defines the beginning of the Copper Age, especially on the economic importance of the metal, which is associated mostly with the copper mining, but is defined in individual cases on the processing of imported copper. In the Central European structure of the Neolithic by Jens Lüning , the lower stages of the Young Neolithic , Late Neolithic and End Neolithic correspond to the Copper Age.

Map of the distribution or expansion of the use of copper during the Copper Age: 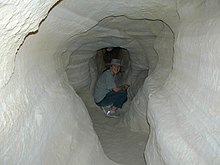 Copper Age mine in Timna , Negev in Israel

The Halaf culture was a Chalcolithic culture found in northern Mesopotamia , in Syria , in parts of Turkey and as far as the border with Iran and beyond. It flourished from around 5200 to 4500 BC. Chr. Name giver locality is Tell Halaf in Syria. Other important sites are Tell Arpachiyah ( Iraq ) and Yarim Tepe . In terms of its extent, it was one of the most extensive cultures of this time, of which many other sites are known. There are four phases: early, middle, late and a halaf- obed transition phase . A spread of the culture can be observed during these phases. The core area was on the Tigris in northern Iraq and eastern Syria. The Halaf culture today is mainly characterized by its ceramics. This already highly specialized technique of ceramic production was accompanied by the skill of generating high firing temperatures of up to around 1000 ° C in the kiln and thus a prerequisite for the smelting of copper.

Early copper smelting is proven in the early Vinča culture of the late 6th millennium BC . Copper tools ( axes and chisels ) recovered from excavations in recent years, as well as slag from the Serbian sites of Pločnik ( Okrug Toplica ) and Belovode ( Okrug Braničevo ) are considered the earliest smelted copper objects in Europe. The associated mining was identified on the basis of specific lead isotopes in copper in the region around Rudna Glava . They are up to 800 years older than the copper and gold objects from the Varna burial ground and the probably associated copper mine at Ai-Bunar (north of Stara Sagora , Bulgaria).

Already during the 4th millennium BC In the area of Timna in the Negev, copper ore was mined. After a break of more than a millennium, the 14th century BC Chr. , The copper extraction and processing again. In the 12th century the Egyptians showed an extraordinary interest in Timna, but the mines soon came under the control of the Midianites .

The first metal cultures in Southeastern Europe - mostly referred to as the Eneolithic there - are the Vinča culture (Serbia, western Bulgaria), the Cucuteni-Tripolje culture (eastern Romania, Ukraine) and the Tisza culture in Hungary. In the Middle East, the Eneolithic extends from the late Halaf period to the Obed period . Objects made of cold forged , solid copper are already known from the pre-ceramic Neolithic . On the Iberian Peninsula , the first copper smelting is documented in the Cerro Virtud settlement ( Almería , southeastern Spain). Brick remnants of the furnace wall of a smelting furnace were found here, which indicates a reduction process. The finding dates to the early 5th millennium BC, as do most of the sites in Southeast Europe. The Los Millares culture continues the metallurgical tradition in Spain.

In Central Europe, the first imported objects made of copper sheet were found in graves of the Rössen culture in the first half of the 5th millennium BC. BC, which however have no economic significance. Objects such as axes and hatchets only appear in Moravia and Austria with the western Lengyel culture , which is also reflected in the southern and central German cultures ( Münchshöfen culture , Gatersleben culture , Baalberg culture ) in the form of imports. Independent copper processing from imported metal exists around 4200 BC. In the Silesian - Bohemian - Moravian Jordansmühl culture , which is evidenced by individual still-preserved molds in the Jordansmühl site .

The first demonstrable copper mining in Central Europe was carried out by the population of the Mondsee culture (3770–3200 BC), as their copper objects partly come from copper gravel deposits on Mitterberg near Mühlbach am Hochkönig (Austria).

Metalworking was initially developed on solid ( elementary ) metals such as gold , silver and copper . The oldest solid copper jewelry plates date from the 8th millennium BC. Chr. And come from Anatolia , for example by finding place Çayönü .

Probably the best-known person of the Copper Age is Ötzi , preserved as a cold mummy , who lived around 3300 BC. . AD lived. When he died, he carried an almost completely preserved copper hatchet with him.

Before the development of bronze , an alloy of copper and tin , metal objects could only be used to a limited extent as weapons, since copper bends when cold and quickly becomes dull. It was not until the casting process that series production of similar objects was made possible.

During the Copper Age, techniques for prospecting and extracting ore were developed primarily in open pits. The development of copper smelting eased the shortage of solid copper. Even lead has been smelted and is often seen in connection with the extraction of the silver. Together with the mining of tin, this laid the technical basis for the subsequent Bronze Age.

The copper-age smelting process started mainly from oxidic or carbonate ores malachite and azurite . These could be smelted in a one-step process with heating in a reducing atmosphere: the ores are created in the oxidation zone of the veins and can be up to 30 m thick. In addition to oxidic ores , more complex ores such as chalcopyrite (copper pyrites, CuFeS 2 ) and chalcosene (copper luster, CuS) were also smelted. With them, the copper is present as sulfide and first had to be roasted in order to convert the sulfur into sulfur dioxide . The reduction to copper then took place in a separate process . For them you needed charcoal and air , more precisely atmospheric oxygen . When the carbon in the charcoal was not completely burned, carbon monoxide was formed , the actual reducing agent in the reducing gas mixture. The melting of the cast copper also requires charcoal, since copper melts at 1083 ° C.

From a cultural point of view, the Copper Age brought several changes: Settlements in Central Europe tended to become smaller, but more fortified. They were mainly on hills . In the Mediterranean region in particular, the development of copper processing led to increased long-distance trade . Copper from the Balkans was partly traded as far as Germany, as shown by a copper disc found on Lake Constance .

It is likely that the exploitation of metal led to major social change . The first upper layers began to form - they controlled the mining and smelting of the metal. This is indicated by the cemetery of Varna on the west coast of the Black Sea in Bulgaria , where an upper class with extremely rich gold gifts (weapons, tools, jewelry, ceramics with gold plating) is buried.

In South America there was a parallel development in the Mochica culture from the 1st century , which settled in the area of ​​the Pacific coast of northern Peru . On a narrow, but around 600 km long strip in the coastal desert, the Mochica operated high-yield irrigation farming with guano fertilization . Ceramics were highly developed, as was metalworking. In addition to gold and silver, the Mochica also processed copper and made copper alloys, especially Tumbago . Their method of gilding copper is also technologically remarkable.

Burning the charcoal generates heat of 1000 ° C to 1200 ° C and carbon monoxide. From a temperature of 230 ° C, malachite (Cu 2 CO 3 (OH) 2 ) reacts to form copper (II) oxide, which also occurs naturally as tenorite . This is reduced by the carbon monoxide. The finished copper flows to the bottom of the reaction vessel and can be removed after cooling.

Both of the resulting products , carbon monoxide and copper (I) oxide, react to form metallic copper:

In another process, which was probably used later, sulfidic copper ore, chalcopyrite or copper pyrites (CuFeS 2 ), and chalcosine or copper luster (Cu 2 S) were processed. Such sulfidic ores had to be roasted beforehand in order to oxidize the sulfur to sulfur dioxide SO 2 and thus expel it as a gas. Only after the sulfur had been removed could the copper ore be reduced. Charcoal was also required for roasting in order to achieve the temperatures required for this. This leads to the formation of slag , which absorbs the secondary constituents (mostly iron sulfide / iron oxide and silica as gangue ) of the ore so that these can be easily separated. Typical temperatures for copper smelting are around 1100 to 1200 ° C, enough to melt both the slag and the metal. The use of furnaces instead of crucibles - both ceramic - makes it possible to extract much larger amounts of metal; accordingly, smelting in the crucible is usually linked to the beginning of copper extraction. Later crucibles were used almost exclusively for casting. 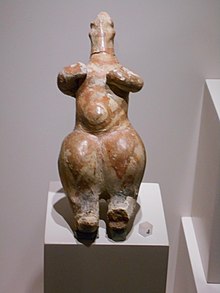 Archaeological evaluations as part of a research network headed by Philipp W. Stockhammer from the Institute for Prehistoric and Protohistoric Archeology at the Ludwig Maximilians University in Munich brought new insights into mobility and starting a family in 2017. At the transition from the Copper Age to the Early Bronze Age, families were founded over a period of 800 years in the Lech Valley south of Augsburg according to the patrilocal pattern combined with individual female mobility: The majority of women came from abroad, probably from Bohemia or Central Germany , while the men mostly came from the region. The researchers suspect that individual mobility played an essential role in the exchange of cultural goods and ideas, which increased significantly during the Bronze Age, which in turn encouraged the development of new technologies.

At that time there were arable farmers and cattle breeders living in southern Germany, whose ancestors had immigrated from Anatolia and Syria about 3000 years earlier via the Carpathian Basin . As part of the investigation, the human remains of 84 individuals have been genetically and using isotope analyzes and archaeologically evaluated since 2012 . They were buried in grave fields between 2500 and 1650 BC. The burial of the immigrant women, which was no different from that of the local population, shows that the women were integrated into the local community.

From an archaeological point of view, the new findings demonstrate the importance of female mobility for cultural exchange in the Bronze Age and open up a new perspective on the great extent of early human mobility: "It seems that at least part of what has been assessed as migration by groups, is based on an institutionalized form of mobility for individuals, ”comments Stockhammer. 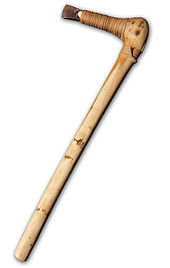 Faithful reconstruction of the copper ax from Ötzi , the man from Tisenjoch, whose time of death was between 3359 and 3105 BC. Was determined