Terracotta (from Italian terra cotta , 'cooked earth') is the name for unglazed ceramic products or products belonging to the pottery group . Terracotta can also describe the naturally warm, earthy to reddish color that is typical for this ceramic .

Terracotta is made from ferrous, red, but also from calcareous , yellowish clay . The mineral composition of the clay types or their mixtures and admixtures ( leaning ) determines the characteristic properties of high-quality terracotta. The pieces have the typical terracotta color and good durability, are waterproof and resistant to frost.

Since only a single fire and relatively low temperatures (900–1000 ° C ) are required, production is not complicated. The material is one of the oldest in cultural history . It occurs in large quantities, is easy to work with and was therefore widely used in ancient times . Later heydays were the Renaissance and the 19th century.

Terracotta, which is fired at particularly high temperatures and whose raw material comes from a certain clay deposit near the village of Impruneta , a material that contains particularly high levels of minerals, aluminum, copper and iron oxides, is called Impruneta . In contrast to sienna terracotta, this is characterized by its particularly high frost resistance, but it is significantly more expensive. It is not uncommon for mixtures to be offered as alleged "Impruneta" terracotta. 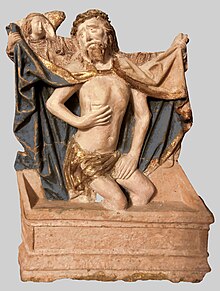 Small objects can already be found from prehistoric times, and numerous human and animal statuettes in the Minoan culture . The Greek terracotta small sculptures of classical antiquity achieved a high quality in the representation of animals, people and deities, efficient workshops existed in many places in the Mediterranean area. Since the 5th century BC Figures were mass-produced using one or more hollow molds. Large sculptures and sarcophagi were also occasionally created using this technique. In both Greece and Italy , terracotta was used on buildings, as roof tiles (here especially for relief-decorated or painted face tiles ), for floors, as material for friezes , for gable decorations and cladding panels on Etruscan temples and as relief panels in Roman villas ( Campana reliefs ).

From the 13th century, independent sculptures in the German-speaking area in terracotta that were created in connection with sculptors and masters of the potter's guild emancipated themselves. The master of carrying the cross from Lorch is probably one of the most famous representatives. In the 15th century, Renaissance artists such as Donatello and Luca della Robbia created important works, often from painted terracotta. 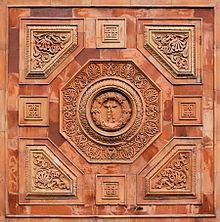 Field of terracotta wall at Wilhelma in Stuttgart

In the 19th century, the old technique was valued again and used more intensively. Impetus came from the widespread preference for classical antiquity since the second half of the 18th century and from the mechanization of work processes, including in arts and crafts and architecture , which originated in England . In the now emerging tension between individual pieces and mass-produced goods, terracotta appeared to many artists and craftsmen as a suitable material. This development is briefly described here using the example of Berlin - Brandenburg .

The Prussian architect Karl Friedrich Schinkel developed the guiding principles for his work from various historical suggestions ( medieval brickwork, Renaissance ceramics) and from a personal preference for natural, solid material. In the economically critical period after the Wars of Liberation , he created a suitably simple but aesthetically sophisticated brick architecture with decorative elements made of terracotta. The extensive construction activity of Schinkel and his students ( Stüler , Persius , Soller and others) promoted the development of highly qualified pottery workshops in Berlin that were able to meet the increasing qualitative and quantitative requirements. A prime example of the resulting buildings was Schinkel's famous building academy , moderately decorated with a number of excellent terracotta reliefs on the history of architecture.

Friedrich Wilhelm IV. , A committed builder, encouraged the use of terracotta. Between 1830 and 1860, the Prussian royal family purchased terracottas for ten projects in the Sanssouci palace gardens in order to underline the southern character of the cultural landscape.

In Potsdam , in 1850/51, a triumphal gate with allegorical representations, completely clad with terracotta panels, was built based on the king's sketches , a novelty in Prussian architecture.

Terracotta is still important today, mainly as a building and utility ceramic. Among other things, large-format ceramic elements for facade constructions , tiles of various shapes and colors for use inside and outside the house, mosaic mats , but also sinks, vases and pots are offered. One of the most famous buildings with a terracotta facade is, for example, the Flatiron Building in New York City.