A piece of slag from a racing furnace 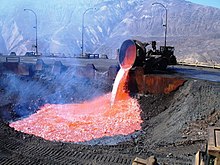 In metallurgy, slag refers to the glassy or crystalline solidified non-metallic accompanying phases. It is a mixture of substances made up of basic and acidic oxides. It arises from the extraction of metals in ore smelting. Slag is a metallurgical tool that is essential for the production of pig iron and steel. At the beginning of ore smelting, the term slag developed from the verb “to beat”, since during this time the non-metallic accompanying phases were separated from the metal (slugs) by beating. A pictorial illustration of this can be found using the example of iron production at Agricola. During the production of copper, the copper hammer blow or copper blow (essentially copper (II) oxide) obtained from the copper hammer was created.

Slag occurs in the metallurgical processes in molten form. Impurities that are lighter than the molten metal and therefore float on it, but have a higher melting point and are therefore in solid form, are known as dross .

The term “slag” is sometimes used incorrectly. For example, the residues from thermal incineration processes can be described as "ashes" (e.g. waste incineration ashes, coal ashes) which, due to their origin and their physical, chemical and mineral characteristics, cannot be compared with those of iron and steel or other slag. The human organism also does not show any kind of "slag".

Slag is formed in almost all metallurgical manufacturing and processing processes. When smelting in high-temperature processes, a homogeneous layer of slag (so-called slag layer) forms on the metal bath due to its lower density. The slag is separated from the metal in the melt flow and then cooled in a liquid state: either by quenching it with water (this creates vitreous, fine-grained blast furnace slag) or by pouring it into so-called beds, in which a crystalline rock is formed that is comparable to natural lava is. The slag then goes through further processing steps, such as breaking, sieving, grinding and classifying, which are also used in the processing of natural rock

Metallurgical slag is a molten rock that essentially consists of non-metallic components and externally resembles natural rocks of volcanic origin.

A distinction is made between the following types of slag (see DIN 4301):

In terms of its structure, slags can be roughly divided into crystalline and glassy slags, the final state of the solidified slag largely depending on the cooling conditions.

The most important structural components of crystalline blast furnace slags are u. a. the following mineral phases are listed: sulfides such as magnetic gravel , alabandin , oldhamite ; Oxides such as spinel , magnetite , periclase and calcium oxide ; and of the silicates, the representatives of the oliving group (with forsterite, fayalite, tephroit , monticellite, merwinite , larnite , rankinite), wollastonite , pseudowollastonite , augite , diopside , representatives of the melilite group , biotite , leucite and anorthite . The representatives of the melilite group, gehlenite , Åkermanite, and their mixed crystals, which are rather rare in natural rocks , regularly make up the main mixture.

The slag that remains after the smelting of copper ores when separating the copper stone consists of olivine (preferably fayalite), pyroxenes of the diopside-hedenbergite series, akermanite, magnetite, cassiterite , zinc blende, copper luster , copper pebbles , delafossite, and solid copper. Usually there is also glass.

In metallurgy, slag is initially used as a cover in order to thermally insulate the liquid metal melt from above. In the electric arc furnace, the arc is surrounded by the slag. In addition to acoustic damping, the thermal radiation loss is reduced by the slag. The slag also serves as a chemically reactive layer, especially in secondary metallurgy.

Homogeneous slag, which is produced in large quantities, has long been used as high-quality secondary raw materials in the cement industry , in transport construction and in agriculture . Slag conserves primary raw material . Through the use of iron and steel slag z. For example, over a billion tons of natural stone have been replaced in Germany alone in the last seven decades - that corresponds to the volume of the Zugspitze . Over 95% of the approximately 13.5 million tons of iron and steel slag produced annually in Germany are used for material purposes.

For example, granulated blast furnace slag (so-called blast furnace slag ), finely ground, serves as a component of various types of cement. Slag-based cements and concretes have proven themselves a thousand times over, u. a. also for buildings and systems that are subject to the highest demands (e.g. drinking water systems, water and sewage works, industrial systems, parking garages, chimneys, silos, dams).

In road and path construction , slag is used as an aggregate in a variety of ways. Thanks to their outstanding technological properties, blast furnace and steel mill slag, for example, is used in layers with and without binding agents and in earthworks . They are characterized by a long service life, high load-bearing capacity, frost and heat resistance and very good grip.

Furthermore, slag is used for the production of mineral fertilizers (converter lime, Thomas phosphate ). Their quality and environmental compatibility prove z. B. Decades of field trials in the Black Forest .

So-called cinder blocks with solid stone formats can be used in paving construction (e.g. Mansfeld copper cinder blocks ). With a density of 2800 kg / m³ to 4000 kg / m³, massive slag is at least as heavy as granite . However, slag that has trapped air as it solidifies is much lighter. Slag wool is used for thermal insulation. Slag was often used directly as an insulating material in older houses that were built near foundries.

In the metalworking industry, the slag from copper production is referred to as iron silicate rock or iron silicate. It is as steelworks slag also including as blasting material in the blasting technique used successfully.

Buildings made of slag in Upper Bavaria

Up to the end of the 19th century, houses were built from cinder blocks in today's districts of Traunstein and Berchtesgadener Land , as they have a similarly good thermal insulation as the building bricks used today and also have a very decorative effect. These came from the iron ore mine in Achthal near Neukirchen (today market town Teisendorf , Berchtesgadener Land district) and the Maximilianshütte in Bergen (Chiemgau), which were closed in the middle of the 20th century . In addition to many farmhouses, there are still larger buildings made of cinder block, such as the Bergen / Obb train station . on the Munich – Salzburg railway line, or the saltworks in Traunstein , which was closed in 1912 . 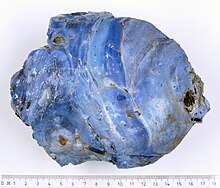 Baked slag with iron residues is also known as "bears".

An important parameter in metallurgical slags is the so-called basicity, which is used to describe the ratio of CaO (sometimes also CaO + MgO ) to SiO 2 . According to this, the slags can be divided into “acidic” or “basic” slags, with CaO and MgO being the basic components and SiO 2 being the acidic ones .

The content of environmentally relevant components in iron and steel slag is generally very low and comparable with that of natural rocks - especially of volcanic origin. Numerous studies prove that neither the use of fertilizers containing slag nor the use of (traffic) building materials with iron and steel slag lead to an adverse effect on the environment. Recent scientific studies also confirm previous results on the chromium content: The steelworks slag in question only contains harmless chromium (III) -containing compounds, an essential trace element for humans and animals. Chromium (VI), which is hazardous to health, could not be detected in iron and steel slag.

Authorities are also checking the environmental impact of iron and steel slag. She fulfills z. B. the ecological requirements of the circulars of the environment and transport ministry in North Rhine-Westphalia, according to which iron slag may even be used in certain water protection areas. The Federal Environment Agency has classified iron and steel slag as "not water-endangering-nwg" according to the Ordinance on Plants for Handling Water-Endangering Substances (AwSV), which has been in force since August 2017. The environmental behavior of iron and steel slag has been investigated for a long time by means of chemical and mineralogical analyzes as well as leaching tests on a laboratory and semi-industrial scale. The results that u. a. are received within the framework of internal and external monitoring are regularly transmitted to the responsible authorities. In addition to the investigations described above, very complex toxicological and ecotoxicological investigations were carried out as part of the implementation of the European chemicals regulation REACH. As a result, iron and steel slag was registered as a "non-hazardous substance".

In Austria, following a study that suggested a health hazard from slag in 2012, in 2013 Greenpeace Austria and ASFINAG commissioned the Austrian Federal Environment Agency to carry out an analysis that resulted in completely harmless values ​​that are only a fraction of the applicable limit values.

In addition to conserving natural resources, the use of slag also reduces CO 2 emissions.