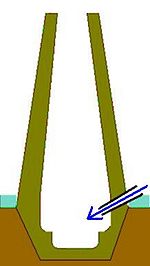 A racing furnace or racing fire is a device for extracting iron from iron ore .

A racing furnace has the shape of a small shaft furnace with a height of about 100 to 220 cm and is built from clay or stones. In some cases there is a hearth pit next to the shaft for the slag discharge , the racing pit . Rennöfen be with charcoal , wood or peat hot heated and then for smelting top wechselschichtig with fuel, mostly needle charcoal , and finely crushed ore, mostly bog iron or Bohnerz with the highest possible iron content filled. The iron yield is between 25 and a little over 30%, depending on the furnace shape, fire control and air supply. At a temperature of 1100 to 1350 ° C - depending on the type of furnace - some of the iron ore is reduced to iron in the semi-solid state. At the same time, slag is formed . The melting temperature of iron (1539 ° C) should not be reached if possible, in order not to produce cast iron that is brittle and not malleable. The slag runs (“runs”, hence the name) through openings from the furnace into the hearth pit.

A racing kiln, made of clay and straw , in the Galli campus during dry-burning

Archaeological remains of a racing furnace

According to another theory that tries to explain the rather large crystals in the shell , the ore in the upper area of ​​the furnace is reduced and carburized as much as cast iron, so that it becomes liquid when it continues to sink. It combines to form a structure that grows on the outside. This happens in an area with excess oxygen near the air inlet (there can also be several), which leads to decarburization and thus an increase in the melting point. However, this theory does not take into account that the iron must first be completely melted for strong carburization.

The ventilation is usually provided by a bellows . There are also tall, chimney-like furnace shapes, in which the natural draft is sufficient, or which are powered by wind through tunnels; Such racing ovens were often built on slopes. The product of the reduction process is an iron pellet (not cast iron) interspersed with slag , which remains in the furnace and is known as race iron. This shell must be forged for further processing . In the process, charcoal and slag residues are expelled. The product is a directly malleable iron, but depending on the furnace layout also steel with an uneven carbon content, which after fermentation is referred to as refining steel to balance the properties and to distribute the ingredients evenly .

Since the racing kiln technology was used in Central Europe for more than 3000 years up to the early modern era, no general description of the kiln operation is possible with the numerous procedures and designs. Tests have shown that around 15-30 kilograms of charcoal are required to extract 1 kilogram of iron (with forging). Ore to coal in a ratio of 1: 1.5 to 1: 3 is usually used in European furnaces. In the Japanese Tatara , a box-like oven shape, mixtures of 1: 2 and even 1: 1 are possible. The amount of coal required for forging and welding (fermentation) / ( fermentation steel ) must be added.

Several kilograms of iron can be extracted per smelting, depending on the ore, furnace size, process duration and other factors. In particular, iron was extracted from the rust-brown turf iron ore found in damp heathland or on bodies of water. The ore, also called Ortstein , is formed in the boundary between the reduction and oxidation area in the soil .

This method was used by the Celts , Romans , Teutons and other peoples in prehistoric times since the Iron Age (in Europe from around 700 BC).

Hydro-powered bellows were used from the 12th century . Since this not only saved manpower, but also allowed more powerful fans, the ovens could be made larger. These larger racing ovens with an automatic fan are called "piece ovens" or "stucco ovens"; probably in contrast to the later blast furnaces , as the result was a single, large piece of iron in the burned-out furnace, in contrast to the continuous flow in the blast furnace.

Another sub-form were the low- shaft ovens, which were used in some places until the end of the 19th century.

The racing furnace was only replaced in modern times by blast furnaces that produce liquid pig iron.