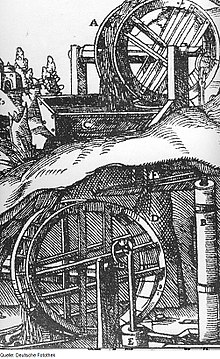 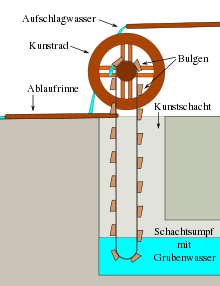 An artificial wheel is a water wheel that was used in mining as a drive machine for the mining arts , i.e. machines and systems.

From the Middle Ages until the 19th century, synthetic wheels served as a power machine in mining. At that time, machines were called arts , from which the name Kunstrad is derived. The most important art driven by artificial wheels was the art of pumps, which served to raise water. Could Kunstrad not be placed in the immediate vicinity of the driven art and this directly drive, the force was an art boom directed to the art.

Schematic sketch of the reversal of the direction of movement

Artificial wheels were usually overshot water wheels that were mostly installed underground in wheel rooms. In contrast to a carrier serving Kehrrad a Kunstrad turned - like a normal water wheel - only in one direction.

Early water arts such as the Heinzenkunst required a uniform rotational movement, while the rising and falling pumping arts developed in the early modern period required a reciprocating movement. This was created through the art of the crooked pin , from which the crankshaft later developed.

In addition to the original purpose of the artificial wheel as a drive for water art, artificial wheels were used in mining as universal power machines, where impact water was available and the drive energy was required. Sun Art wheels were already as drives for medieval stamp mills used. Hydro-powered bellows were used from the 12th century . Driving was added in the first third of the 19th century .