The towers of the Lübeck Bürgerwasserkunst (back) and the Brauerwasserkunst (front) on the Hüxterdamm in 1552, shown on the Lübeck cityscape by Elias Diebel . The manufacture of the wooden pipes is shown in the foreground.

A water art is a system for conveying, raising and guiding water, usually produced or supervised by an art master .

The use of such systems, especially in drainage and water supply , has been documented for several thousand years. The Romans put water wheels and Archimedean screws one for many purposes, including in mines . Their function for raising of water, for example, Vitruvius' work De architectura or by Pliny the Elder in his Naturalis Historia described. Water arts were used in the late Middle Ages to supply water to cities and castles and were widely used in mining for dewatering and other areas of application. Georgius Agricola describes the use underground in his major work De re metallica libri XII , published in 1556 . Water arts were also used to operate fountains and fountains, for example in parks and public places.

The Austrian engineer Hermann Waldhauser rebuilt the Great Pyramid of Cheops based on tips from Herodotus to function as a water lift. However, this interpretation of the pyramid is not recognized in archeology.

Water supply for cities and castles in the Middle Ages 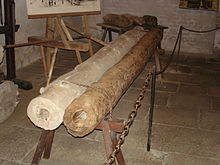 Wooden tubes of the water art of Stolpen Castle 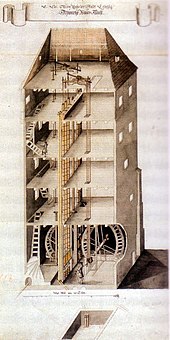 Initially, the term water art only referred to the unit of pumping station and water tank, later the term was also used for the entire system of the pipe system. The first water arts were made of wood, later of stone. They consisted of a pumping station and the driving water wheel as well as an elevated tank in which the water was stored. Through a system of pipes, mostly in the form of hollowed out tree trunks - the dykes - the water was directed to the places of consumption ( water chutes , stone troughs) in order to ensure a water supply for the higher-lying houses. An early example of such a system is the Alte Wasserkunst in Bautzen, the wooden version of which was first built in 1495.

Underground water art in the Rammelsberg mine

Water arts were also used in mining . Purpose was not only the dewatering of the mine workings in the mine drainage . Water arts were also used, for example, to convey loads and people ( driving skills ), to ventilate mines or to crush rocks in stamping mills . Other devices were also given the designation art in the sense of machine in mining . Together with water art, they formed the mining arts . Georgius Agricola described in several publications in the first half of the 16th century and especially in his fundamental work De re metallica libri XII , which appeared in 1556 a year after his death, together with the other mining arts numerous types of water art in mining.

The first medieval use of water arts in mining took place in the Saxon-Bohemian ore mining, where so-called bulk arts were used. In the Harz, the so-called Heinzenkunst was used for the first time in the Rammelsberg mine around 1435, and it was introduced here on a large scale around 1536. Since 1564, the "Art on crooked pin" came in Rammelsberg used, in which a connecting rod on a Kunstrad an art boom a pump drive. Water arts were later widely used, for example in silver mining in Tyrol , in copper mining in the Mansfeld district or in coal mining in the Aachen district and in the Ruhr area .

An example of an old water art in mining is that of the Rammelsberg in the Harz Mountains. In addition, the Harz is rich in mining dewatering and hydraulically powered arts, such as that of the Polsterberger Hubhaus .

In the Schwaz silver mine in Tyrol , the pit water has been raised by water servants since 1515 . As there were increasing personal and financial difficulties with them, a water wheel was installed underground in 1556 to lift the pit water. The required impact water was taken over days from a stream and brought in through a four kilometer long impact gully. Improvements to this system were made in 1650 and 1755.

In the Eschweiler district of pump in the Aachen district , a pump system consisting of two large water wheels, called "Herrenkunst", was probably built around 1632, which diverted the impact water from the Inde and, in conjunction with two sunk shafts, served to keep the water in Eschweiler Kohlberg . The name “Herrenkunst” comes from the fact that the dewatering was carried out on account of the territorial lord, the Count of Jülich . The pump system remained in operation until 1891.

Ancillary systems for operating the water arts in mining

To which usually underground in a Radstube powered water wheels to operate more plants were needed:

Water art in gardens and parks 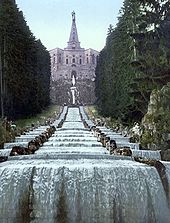 The cascades below the Hercules in Kassel

Ruins mountain , water basin for operating the fountains in the Park of Sanssouci in 1775

In the age of the Renaissance and the Baroque , the term water art also included artistically designed systems with fountains, gargoyles , artificial cascades and the like, the variability of which was implemented architecturally and artistically through the staging of water as an element to represent the value and wealth of the epochal phase has been. In addition to the original necessity of pumping water as a life-sustaining good during the Middle Ages, the well was a prospective feature of the transfigured wealth of secular and clerical rule. According to the state of the art, both the natural pressure of gravity and, especially later since the emergence of decentralized water supply as a system, the water pressure generated by pumps was used to operate fountains. These were found as part of palace and garden designs and are now often referred to as water features . In addition to their presentational emphasis, they received a representative expression of national and military sovereignty with the end of the Baroque in the transition to absolutism. As a decorative element in public space, fountains were given the purpose of decorative use in the transition from the city of early industrialism and the booths to the industrial-bourgeois city of the premodern from the end of the 19th century. This is where the understanding of European city and garden facilities differs as a result of the principle of rule of the respective time. The late baroque Paris of Napoleon III. was reshaped by Georges-Eugène Haussmann in a completely different way than the late Prussian Berlin of the Hobrecht plan by Josef Stübben . (see: urban development ). The Italian Renaissance cities and the cultures of the Mediterranean region have incorporated their own historical handling of the element into the design and layout of their cities and buildings due to the different climates.

Water arts for hilltop castles, mountain castles and fortresses from the 16th century

The Saxon castle Augustusburg was formerly supplied with water by a pipe water line and a water art because the well was not productive enough. Likewise possessed fortress Stolpen a water art with tube water pipe in addition to the castle well. Both systems have not been preserved. In front of the rock with the ruins of the Wendelstein fortress in the Unstrut valley , the ruins of a tower-like water art have been preserved, with which the fortress was once supplied with water from the Unstrut . In the immediate vicinity there is another mill building on the river. Friedenstein Castle in Thuringia used to be supplied with water via the Wasserkunst Gotha , a pumping station with wooden pipes.

The functionally preserved water art (from 1763) of the graduation tower in Bad Kösen , in Saxony-Anhalt, is said to be unique throughout Europe . An undershot waterwheel in a half-timbered building in the valley of the Saale on the "Radinsel" drives two wooden rods that perform a pendulum movement. The rods several hundred meters long transfer the energy of the water wheel up the Saale valley slope to the pumps in a shaft ( Borlachschacht im Borlachhaus) of the brine spring (Borlachquelle) and to the 325 m long graduation tower that stands on the slope of the Saale valley. The Art linkage runs through the Borlachhaus and the largely horizontal pendulum movement is in the building by an Art Cross transformed into a vertical oscillating movement, originally the pumps in the shaft drive (now these are to be electrically operated). The rods emerging from the Borlachhaus extend up to the graduation tower. After flood damage, the system has been under restoration since 2018 and should be fully functional again in mid-2019. At the graduation tower itself, pumps are / were (?) Formerly operated by the pendulum rods, which pumped the concentrated brine in the trough under the graduation tower up to the head of the graduation tower. The salt solution (brine) of the graduation tower, which was concentrated by the evaporation of drops , was finally turned into salable table salt by evaporating the water (in pans?) .