This article describes the cultural heritage in Tivoli, for the luxury hotel on Lake Como see Villa d'Este (Cernobbio) . 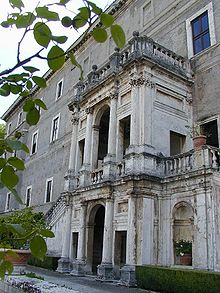 View from the Villa d'Este

Fountain of Neptune and water organ

The Villa d'Este is a palace and park from the 16th century in Tivoli , Lazio region near Rome in Italy and a UNESCO World Heritage Site since 2001 .

History of the origin of the Villa d'Este

Cardinal Ippolito II. D'Este (1509–72), second-born son of Alfonso I d'Estes , the Duke of Ferrara, grandson of Pope Alexander VI. , and Lucrezia Borgia , became governor of Tivoli in 1550. Because of his ecclesiastical and secular connections, he became one of the wealthiest cardinals of his time and a patron of the arts. His residence in a former Benedictine monastery did not meet the requirements of a cardinal from the house of the Este, but had a great view of the landscape below and extensive water reservoirs for fountains and gardens. Therefore Ippolito planned to create a garden on the sloping slope of the Valle Gaudente below his palace, which could only be realized in 1560. The draft was made by the painter, architect and archaeologist Pirro Ligorio from Naples , and it was implemented by the court architect Alberto Galvani . In order to enlarge the valley lengthways, some buildings had to be removed. Diplomatic missions by Henry II of France took him to Parma and Siena until 1555 . In September 1555 he was accused of simony by Pope Paul IV and went into exile. When Cardinal Ippolito II. D'Este died in 1572, the work on the palace was almost complete.

The rooms of the palace were richly adorned by the best artists of late Roman Mannerism . Were involved Livio Agresti from Forlì , Federico Zuccari , Durante Alberti , Girolamo Muziano , Cesare Nebbia and Antonio Tempesta .

33 years later, in 1605, his successor, Cardinal Alessandro d'Este, commissioned further work. The existing facilities were repaired, the overall conception of the gardens changed extensively and the decorations of the fountains were renewed. From 1660 to 1670 construction work took place again, in which Gianlorenzo Bernini was also involved.

In the 18th century, the complex, now owned by the House of Habsburg , fell into disrepair because too little was done to preserve it. The gardens were deserted, the fountains collapsed and the collection of ancient statues, which had been expanded mainly by Cardinal Ippolito II. D'Este, was scattered to the wind. The decline lasted until the middle of the 19th century. It was not until Gustav-Adolf Prinz zu Hohenlohe-Schillingsfürst , who had received the villa in enfiteusi ( Emphyteuse ) from the Dukes of Modena from the House of Austria-Este , initiated a series of works in 1851 to protect the complex from further deterioration. Since 1867, Franz Liszt at Gustav Adolf Cardinal Hohenlohe at the Villa d'Este in Tivoli to visit; In 1869 Liszt moved from his apartment on Monte Mario to the Villa d'Este. Here he composed three piano pieces that were later published in the album Années de pèlerinage : Troisième année : Les jeux d'eaux à la Villa d'Este (the fountains of the Villa d'Este, Giochi d'acqua ) and two pieces known as Threnodies entitled Aux Cyprès de la Villa d'Este .

Franz V left the villa posthumously in 1875 to Archduke Franz Ferdinand of Austria-Este , later heir to the throne of Austria-Hungary. Franz Ferdinand negotiated a long time with the Italian government and wanted to sell the villa for two million lire. On June 28, 1914, he and his wife were shot by an assassin in Sarajevo .
After the end of the First World War , the villa became the property of the Italian state. In the 1920s, it was extensively renovated and opened to the public. During the Second World War , the facility was bombed in 1944. Since then there has been numerous repair and maintenance work. For decades, air pollutants have damaged the building fabric.

Description of the gardens

The gardens, a masterpiece of garden art, extend down a slope from the villa. They include more than 500 fountains , nymphaea , water features , grottos and water basins as well as a water organ . The natural gradient was artfully used to operate the enormous facility.

The garden consists of two parts of different character.

The hillside garden runs down the slope in a sequence of ramps, stairs and terraces. The central axis marked by niche architecture leads from the palace down to the main garden. There are long paths across the slope along linear fountains ( Allee der Hundred Brunnen ). There are special fountains at the head ends ( Fontana di Tivoli , Fontana di Roma ).

Below is the imposing transverse axis of the gardens along the slope. On it are three fish ponds staggered one behind the other. The last basin cuts into the north-western slope and is closed off by a double terrace over which the imposing Neptune Fountain with its water organ towers. On the opposite side, Ligorio arranged an exedra , a kind of vantage point that protrudes from the southwestern boundary of the garden. From there you can enjoy a wide view over the valley.

The main garden ( Gardino delle Semplici ) is a little flatter. Arcades lead through small gardens; Medicinal herbs and useful plants were originally intended to be grown in some beds. In the ideal view by Étienne Dupérac from 1573, two labyrinths can be seen in this part of the gardens .

The fountains of the Villa d'Este

Avenue of the Hundred Fountains

Classification in art and architecture history

Fresco representation of the Villa d'Este

The Villa d'Este is a major work of Italian garden art of the Renaissance . An engraving by Étienne Dupérac shows the typical geometric structure of the gardens. The ancient statues can still be assigned to the Renaissance. The many mythological references are already considered mannerist, e.g. B. at the Rometta. The lines of sight of the avenues and paths are typically baroque . The gardens were the model for many gardens in the age of Mannerism and Baroque.

Entry as a World Heritage Site on the UNESCO list

The villa has been registered as a World Heritage Site by UNESCO since 2001 . The reasons given by UNESCO are: