This article covers the location in the metropolitan city of Rome. For the wine of the same name, see Cerveteri (wine) .

Location of Cerveteri in the province of Rome

Cerveteri lies 42 km west of Rome between the Sabatine Mountains and the Tyrrhenian Sea . The hilly landscape in the municipality is named after the town of Colli Ceriti . The old town is located on a terrace above the coastal plain 7 km from the coast. The municipality extends over a height of 0 to 482  m slm

The municipality includes the districts of Campo di Mare, Cerenova and Furbara by the sea, as well as Borgo San Martino, Casetta Mattei, Ceri , Cerqueto, Due Casette, I Terzi, Procoio, Sasso and Valcanneto inland.

Cerveteri is an Etruscan foundation and in ancient times was called ( Latin ) Caere , ( Etruscan ) Kaisrie , Kaire , Caisra or Cisra and has been inhabited since the time of the Villanova culture (written on the Pyrgi-Bilingue phoeniz. Kjsrj ). The Greeks called the city Agylla in an unclear etymology . Caere was one of the most important cities of the Etruscans, a trading metropolis on the Tyrrhenian Sea with three ports and a member of the League of Twelve Cities with close ties to Greece . The city's heyday was in the 7th and 6th centuries BC. BC, in the early 5th century BC The decline began both economically and culturally. In 353 BC Caere was subjugated by the Romans . From then on, the history of Caere was closely linked to Rome.

In the Middle Ages, after raids by the Saracens and because of the spreading malaria , the inhabitants of the city moved to the more defensible Caere Novus , today Ceri, 9 km away. It was not until the 17th century that the place now known as Caere Vetus was repopulated.

A three-headed doe in natural colors on a blue shield . She carries a golden lance with a red flag with the golden letters C and C. The three-headed animal goes back to a relief that was found in the Banditaccia necropolis. The city colors are red and yellow. 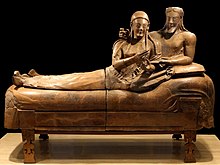 Banditaccia, entrance to a burial chamber

Cerveteri was one of the most important Etruscan cities. In its heyday, the export of iron ore quickly made the place one of the largest and most populous coastal cities in southern Etruria . Only Tarquinia could measure up to his power . Ancient Caere was more than 15 times the size of today. Until the end of the republic in Rome it was considered right to study in the old Etruscan city of Caere to complete the education, which probably lives on in the concept of the 'ceremony'.

The connection to Greece is particularly evident in the design of the graves. But there were also clear cultural differences. The graves z. B. was of importance in Etruria that it never had in Greece.

The early history of the city of Rome was clearly dominated by the Etruscans and later, when the Romans had become independent and powerful, they wanted to erase the memory of the Etruscans as much as possible and destroyed everything on the Etruscan buildings that was made of wood. That is why only those things that were made of stone have survived from Etruscan architecture, such as the city walls in some Tuscan cities such as Cortona.

The typical entrance to an Etruscan barrow consists of stone blocks stacked one on top of the other and gradually shifted inward, ending in a ceiling slab. Such a tumulus grave was carved out of the standing tufa of a small hill in the beginning, then covered with earth and planted. Such graves were later built from stone.

Cerveteri was undoubtedly the richest, most powerful and busiest of all the seaside towns in Etruria. The names of the Tyrrhenian and Adriatic Seas are of Etruscan origin. Hunting, fishing, and shipping were the favorite pastimes of its residents. The height of urban development was between the 7th and 5th centuries, when Cerveteri had about 100,000 inhabitants.

The Etruscans have become famous in the history of art for the production of bronze works - e.g. B. the Capitoline Wolf and the so-called "Brutus" in the Capitoline Museums in Rome. Their most independent invention, however, are their large round graves, of which the most important group is here in Cerveteri. They are sometimes so close together that only one passage between them remains free.

Several family graves with separate entrances could be gathered in such a burial mound. When entering, steps are taken to lead you down. With this measure one gained more space for the burial chambers in the standing stone.

The cities of the Etruscans were built entirely of wood, including most of the temples and aristocratic palaces. Only the foundations of the temples and the secular buildings, the fortifications - and the graves were made of stone. In mountainous areas these houses of the dead were chiseled out of the rock, in flat areas the stone burial chambers were covered with earth so that they formed a hill.

In front of the entrance there was an uncut stone pillar for the man, a small triangular stone house for a female corpse. In this way one could read the number and type of buried corpses from the symbols.

Not all entrances to the graves are at ground level. There are also entrances that have not yet been properly exposed. Not all graves have been found and not all graves have been found accessible to the public. In this area as well as in others where Etruscan tombs are suspected, unofficial, one could also say criminal attempts to find such graves, to plunder and sell their treasures, flourish. These today's grave robbers are called in Italian "Tombarolo". Some of their looted property is - as we have known recently [1996] - auctioned off without hesitation in the Sotheby’s store in London . The Getty Museum in California has also got a bad reputation here - at least since 2005.

Since it is not possible to constantly monitor all these scattered places of former Etruscan settlements in the Italian landscape, some people have specialized in finding and robbing these undiscovered graves with high-quality search equipment.

Since 2004, the necropolis belong to the world heritage of UNESCO .

Cerveteri is an agricultural center. Viticulture is important with the production of the DOC wine Cerveteri .

During the Second World War, there were two military airfields near Cerveteri . The small military airfield Furbara is still active and is used by a special unit of the Italian Air Force. At the former Cerveteri-Ladispoli airfield ( ⊙ ), the AISE intelligence service maintains a system for monitoring satellite communications. 41.973333333333 12.066944444444