Trevignano Romano is a municipality with 5885 inhabitants (as of December 31, 2019) in the Italian region of Lazio , metropolitan city of Rome , on Lake Bracciano about 40 km north of the Italian capital.

Trevignano Romano is located on the north bank of Lake Bracciano, which, together with a number of other lakes - Vico , Bolsena , lakes of the Alban Hills - belongs to a lake district of volcanic origin north and south of Rome ; this historical landscape is also called Campagna Romana .

About 20 million years ago this area was a partly swampy, partly sandy plain that was often inundated by the sea. 4 million years ago, the region was rocked by a series of volcanic eruptions that resulted in the formation of the Monti della Tolfa and Monti Ceriti ranges of hills . A second series of eruptions around 1,000,000 and 500,000 years ago gave the landscape its present-day appearance. When the magma was ejected , circular depressions were created, which were then filled with water.

According to archaeological finds, the north shore of Lago di Bracciano was already Etruscan ; possibly the ancient settlement Sabate , which can no longer be precisely localized, was located here , which is still etymologically preserved in the name of the Sabatine mountains ( Monti Sabatini ), which surround Lake Bracciano. There are some necropolises within 3 km to the west and east of today's Trevignano Romano .

With the conquest of the Etruscan cities -Stadt Veii v in 387th In BC Lake Bracciano became Roman . The area is believed to have been the home of the genealogical family up to 447 BC. Traceable plebeian family Gens Trebonia ; today's place name is explained by this etymology.

In the Middle Ages, when the territory of the Papal States belonged to a typical feudal developed: The small village that was created on the lake, was approved by the Roman noble family Orsini controls who inhabited the papal castle on the hill and later in power struggles with other noble families entangled. At the end of the 15th century, the papal central power tried to break feudal rule; on behalf of the Borgia Pope Alexander VI. In 1496 the castle was destroyed by Giovanni Borgia (brother of Cesare Borgia ). Alexander VI. thus succeeded in bringing Trevignano and the northern shore of the lake under his control; however, he could not take the most important Orsini fortress on the southwest bank in Bracciano .

Since 1870, Lake Bracciano, like the entire Papal States, has belonged to the Italian national state.

Today's Trevignano Romano serves the Romans as a recreational area on weekends and also as a location for long vacations for foreign guests. 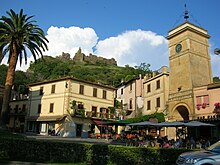 City gate and ruins of the castle on the hill

Trevignano Romano is a leisure-oriented community on the lake with palm-lined, traffic-calmed promenade ( Lungolago ) with cafes and restaurants, a small medieval town center and a few streets for through traffic (Via Garibaldi, Via Mosca, Via Sutri).

Claudia Maciucchi was elected mayor in June 2016; she is the first woman to hold this post in Trevignano Romano.

The main source of income in the 21st century is regional as well as national and international tourism, but no organized package tourism. Trevignano Romano has a number of hotels, B & Bs, apartments, campsites and rural tourism due priority.

The excursion restaurants, which are geared towards Roman families and offer fish specialties from the lake (mainly perch and coregonus ), are very popular at the weekend .

In 2004 Trevignano Romano was awarded the Orange Bandiera Arancione flag for environmentally friendly tourism by the Italian Touring Club .

The water quality of the lake is considered excellent. Shipping and motor boats are prohibited; sailing, boating and windsurfing remain as water sports.

Trevignano Romano lies within the Parco Naturale Regionale di Bracciano-Martignano , a nature reserve between the provinces of Viterbo and Rome with numerous hiking trails.

The Sentiero Malpasso opens up the macchia between Trevignano Romano and Monterosi for 8 km with a series of viewpoints over the lake.

The technically challenging 18-hole golf course Le Querce (named after the oak forests in the nature reserve, but entirely without oak) - is frequented by mostly Roman club members and holiday guests and is also a training center for professional golfers and golf instructors. The complex with accommodation and catering is located approx. 15 km north of Trevignano Romano near Via Cassia .