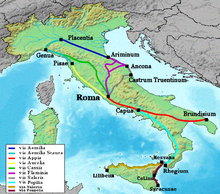 The Roman road network. The Via Cassia in green.

The Via Cassia (in red) with its continuation to Luca (Lucca).

From Rome it ran via Veji and Sutrium (Sutri) and Forum Cassii (near Vetralla ), at Volsinii novi ( Bolsena ) past Lacus Volsiniensis into the valley of the Clanis until shortly before Clusium ( Chiusi ). The forum marks the middle of the entire road; this was so common with the roads built by the Romans. The Via Cassia was around 130 kilometers long. Today it is difficult to understand the original route of the road, because in post-antique times it was often distracted by the proximity to settlements. Even the old route directories contradict each other on some points. For this reason one cannot define the original road with 100% certainty.

Although it was built in ancient times , it retained a certain importance into the Middle Ages. Because it was still relatively well preserved, it was considered to be one of the most important connections between northern Italy and Rome. Especially with their width, which could be up to 3 m, larger troops could be moved quickly. On the assumption that Charlemagne could have used the street in his time, it was temporarily named as part of the Via Francigena ("Frankenstrasse").

It can also be observed that over time, some stones that came from the street were used to build buildings (e.g. houses or graves). But not only the Via Cassia, but also other streets shared this fate, which can be ascribed to the general scarcity of raw materials in the Middle Ages.

Its continuation led from Clusium (Chiusi) via Arretium ( Arezzo ), Florentia ( Florence ) to Luca ( Lucca ), and finally on to Genoa .

The course of the Via Cassia in Italy is still reproduced today by the state road 2 (SS 2), which also bears the name Cassia.

Commons : Via Cassia  - collection of images, videos and audio files