The title of this article is ambiguous. Further meanings are listed under Arezzo (disambiguation) .

Arezzo ( Latin Arretium , Etruscan Aritim ) is a city with 99,258 inhabitants (as of December 31, 2019) in the central Italian region of Tuscany , northeast of Siena . It is the capital of the province of the same name and the fourth largest city in Tuscany (after Florence , Livorno and Prato ).

With its merchant palaces, patrician houses and sacred buildings, Arezzo is a jewel of medieval architecture and culture.

The city is of Etruscan origin and was called Aritim in Etruscan . It belonged to the League of Twelve Cities of the most powerful Etruscan cities and was on the ancient Via Cassia . In the late Augustan period, there were important factories for the production of Italian terra sigillata here . Arezzo was the seat of a bishopric from the 4th century AD , and the seat of a count in the Lombard and Carolingian times; Subordinated to the Marquis of Tuscany in the post-Carolingian period. The noble and episcopal administration was replaced in the early 12th century by the consular constitution that became common in Italy.

At the beginning of the 13th century, the communal movement replaced the old government, which was now entirely provided by the consul. The associated struggles between the people ( popolo ) and the aristocratic families continued, however, as there was general social unrest in most of the municipalities of Upper and Central Italy at this time. The city was considered Ghibelline and thus loyal to the emperor. In addition to Pisa , it was the only commune in Tuscany to stick to it in the early 14th century. Emperor Henry VII stayed in Arezzo for some time and passed several laws there. 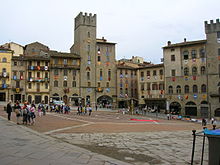 Patrician houses on the edge of the Piazza Grande 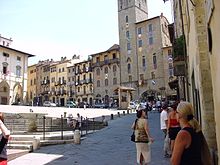 The commune soon fell to Florence. There were riots, but apart from a few episodes, it remained under Florentine rule. The city ​​fell into disrepair under the Medici and its heyday in the 13th century had long since passed.

At the beginning of the 13th century a university was founded by students who had emigrated from Bologna . The focus in Arezzo was also jurisprudence, as well as medicine. In the 14th century, however, the university fell into disrepair and soon went under. Today the Philosophical Faculty of the University of Siena is located in Arezzo .

Description: In silver, a black horse jumping to the right (heraldic: left) . The five-towered golden crown of the wall above the shield .

In Italy, municipalities can be divided into fractions , which in German roughly means "localities". In Arezzo there are the following fractions ( Italian frazioni ):

Not far from Ponte Buriano (frazione di Arezzo) is the bridge on Strada Provinciale Setteponti, shown in the world-famous painting " Mona Lisa " by Leonardo da Vinci .

Arezzo is home to the football club US Arezzo , the currently ( 2019/2020 in the third-highest division) Series C plays. Between 1966 and 2007 he was also in the second-highest division for 16 years (see Eternal table of Serie B ).

Their handicrafts made the city rich, especially the famous "Aretine vases" and the tradition of jewelery making that has remained alive. Since then, Arezzo has been known for its jewelry industry far beyond the borders of the region . Many hundreds of craft and industrial establishments help ensure that Arezzo is considered wealthy. In addition, many visitors come for the antique market and many antique shops. Arezzo has recently become a film city. Some scenes from Roberto Benigni's award-winning film “ Life is beautiful ” (“La vita è bella”) were filmed on the Piazza Grande and Corso Italia . 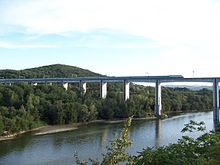 Viaduct of the Direttissima Firenze – Roma near Arezzo

Arezzo is on the E 45 - A 1 as well as on the north and south of the Florence-Rome line connected to the Direttissima Firenze-Roma and two branch lines operated by the Trasporto Ferroviario Toscano to Pratovecchio - Stia and Sinalunga . Arezzo has an airfield for general aviation . 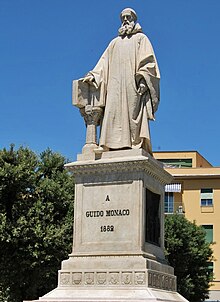 Monument to Guido Monaco in Arezzo 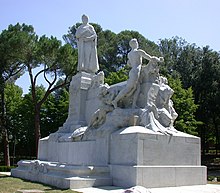 Monument to Francesco Petrarca in Arezzo 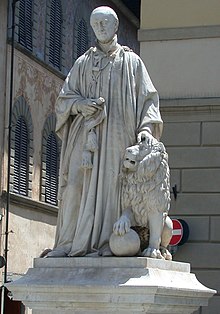 Statue of Vittorio Fossombroni in Arezzo