Tebaldo Visconti came into contact with Cardinal Jacopo da Pecorara around 1236 , for whom he subsequently worked. In 1246 he became archdeacon of Liège .

Election to the Pope

After the office of Bishop of Rome had not been occupied for almost three years after the death of Pope Clement IV - it was the longest vacancy since Marcellinus - Tebaldo Visconti was elected Pope in absentia on September 1, 1271, without ever having been a priest to be. Charles of Anjou , King of Sicily, was to blame for these conditions , who played off his dependent cardinals against the cardinals who wanted to counterbalance him and crown a new Roman-German king as emperor . During this time, Charles consolidated his tyrannical regime, but did not lose sight of his main goal, the conquest of Byzantium .

At the time of his election, Gregory X was still with the army of Edward I of England on the Seventh Crusade in Palestine . He commissioned ostensibly as a newly elected pope in Acre , the three already on their way to the Mongol ruler located Salesman Niccolò , Maffeo and Marco Polo officially to continue their journey to the Great Khan to this for Christianity to convert and as an ally against Islam to win.

On March 13, 1272, Tebaldo Visconti arrived in Rome, where he was ordained a priest on March 19 and installed as Pope Gregory X on March 27. 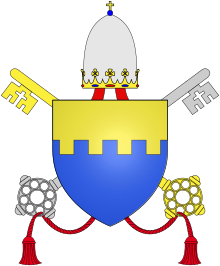 Gregory called the 2nd Council of Lyons to organize a new crusade , but despite the promises of the kings of England, France and Sicily, he could neither spark enough enthusiasm nor win enough money for this crusade to take place. On the other hand, at this council, at the instigation of Michael VIII , the emperor of Byzantium, the eastern and western churches were briefly reunified (1274–82) . Emperor Michael wanted the union to protect himself from King Charles' desire for expansion, who of course was against this union. Meanwhile, King Karl called himself King of Albania and continued his policy of conquest in Greece. This union came about despite the resistance of the Byzantine clergy and the Byzantine people. But the hatred of the Byzantines for Latinism and the West, especially because of the crimes committed in the Fourth Crusade , was too great. That is why Emperor Michael could not prevail in the end, despite suppressive measures. His son and successor Andronikos II. Palaeologos finally revoked the union after taking office in 1282. In the end, the Pope was only able to broker a brief armistice between Emperor Michael and King Karl.

The best-known result of the synod from today's point of view , however, was probably the decree Ubi periculum , in which the election of the pope was scheduled ten days after the death of the old pope and the conclave was introduced in order to shorten the time until the election of a new pope. This meant that the cardinals were no longer allowed to leave the premises where they met for this project until the successful election of the Pope.

Gregor campaigned for the settlement of the disputes between the princes in Italy and Germany. He himself wrote a pamphlet to reconcile the Guelphs and Ghibellines , and also worked towards the end of the interregnum in Germany . The new French King Philip III. of France wanted the imperial dignity for itself. The Pope, however, strictly rejected this request. He also refused to support Ottokar II of Bohemia for the German royal crown. Instead, he announced to the elector that he would appoint a German king should they not be able to make up their minds - although the main motive for Gregor's urging must be seen in his search for support for his planned crusade. As a result, Count Rudolf von Habsburg was elected in Frankfurt am Main on October 1, 1273 and crowned in Aachen on October 24 . After long negotiations, the Pope obtained Alfonso X's renunciation of the German crown. Gregor tried in vain to mediate an alliance between King Rudolf and King Karl. He met with King Rudolf on October 20, 1275 in Lausanne to promise him the coronation of the emperor on February 2, 1276, which, however, did not take place due to the death of Gregory.

Gregory X died on January 10, 1276 in Arezzo and was buried in the cathedral there. His death heralded the only four-pope year so far .

He is venerated as a blessed in the Catholic Church . His feast day is the anniversary of his death on January 10th.