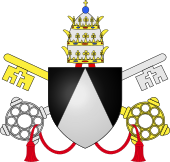 Coat of arms of Innocent V.

On 10 January pope dies Gregory X. With Pierre de Tarentaise is on 21 January under the name of Innocent V for the first time a Dominican pope. He is elected only one day after the beginning of the conclave , which meets for the first time according to the strict rules of his predecessor Gregor X. The cardinals are not allowed to leave the building before a new pope has been elected. Although the new Pope tended towards neutrality, he quickly came under the influence of Charles I of Anjou , who resided in Rome as a Roman senator. After almost six months, he dies on June 22nd .

The conclave in July proves to be quite arduous, since no successor for Innocent can be found. Finally, in his function as Senator of Rome, Charles of Anjou reminds of the conclave settlement of the Second Council of Lyon and takes over the direction of the conclave. He isolated the cardinals from the outside world and reduced their meals. Only when the blistering heat of the summer demands their victims among the cardinals - many collapse exhausted - the election falls on July 11th on Cardinal Ottobono Fieschi , who as legate for England a few years earlier was instrumental in ending the civil war there and reforming the English Church contributed. He ascends the papal throne under the name Hadrian V. Because he was not ordained a priest as a cardinal deacon, Hadrian repeals the conclave order of Gregory X., his only official act in writing, which can still be proven today. He died of heat stroke near Viterbo on August 18 .

Coat of arms of John XXI.

Finally, after heated discussions in the conclave, on September 8th, the 60-year-old Peter Rebuli-Giuliani climbed as Johannes XXI. the chair of Peter. The influence of Cardinal Giovanni Gaetano Orsini tipped the balance in favor of his choice. John XXI. resides exclusively in Viterbo. The trained physician encourages study reform at universities and awards scholarships for particularly talented students. During his term of office - as already under Urban IV. And Clemens IV. - important philosophers, natural scientists and physicians worked at the papal curia. In order to resume his own studies, he had a private library built at the back of the Papal Palace in Viterbo. 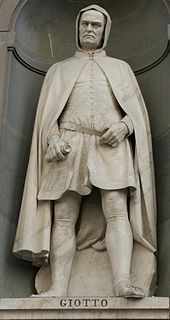