The title of this article is ambiguous. Further meanings are listed under Montpellier (disambiguation) .

Montpellier  [ mɔpəlje, mɔpɛlje ] ( Occitan Montpelhièr ) is one of the largest cities on the French Mediterranean coast and belongs to Région Occitan , which on 1 January 2016 by merging the former regions Midi-Pyrénées and Languedoc-Roussillon has emerged. Up until then, Montpellier was the capital of the latter. Montpellier is the seat of the Préfecture des Dérault . The population is 285,121 (as of January 1, 2017) (1999: 225,392), together with the suburbs, the population is over 400,000.

Montpellier is located about 240 km east of Toulouse and 170 km northwest of Marseille in a hilly area, about 10 km from the Mediterranean coast, on the river Lez . The original name Monspessulanus is derived from either Mont Pelé (bare hill, little vegetation), Mont de la Colline or Monte Pestelario .

Montpellier is one of the few important French cities without an ancient background. It was first mentioned on November 26, 986, when Count Bernard de Melgueil (Melgueil corresponds to today's Mauguio ) William III. Land on the ancient Via Domitia , between the Lez and Mosson rivers, for his selfless merits. His heirs built a castle that housed a castle and a chapel. Due to its excellent location between Catalonia and Italy on Via Domitia next to the port of Lattes , Montpellier quickly became a trading center with connections across the Mediterranean, to Spain and Northern Europe and developed a mixed population of Jews, Muslims and later Protestants. Goldsmiths, drapers and merchants settled here, and even today you can tell from the street names in the historic center which goods were traded there. On November 9, 1202, the dynasty of the Lords of Montpellier from the Guilhems family (in German Wilhelm) ended with the death of Wilhelm VIII.

Montpellier came into the possession of the kings of Aragon through the marriage of Marie of Montpellier to Peter II from Aragon in 1204 and their death in 1213. Montpellier received city ​​rights in 1204 and the right to appoint twelve ruling councilors a year. The very extensive privileges were retained until the death of James II . In the Middle Ages, the Via Domitia was used as a pilgrimage route to Santiago de Compostela. The Notre-Dame-des-Tables church in Montpellier was an important stop for the pilgrims of St. James. As a result of the pilgrimage tourism and the expulsion of the Jews and Moors from Spain, a number of hospitals and charitable institutions developed in Montpellier . 1220 founded City Council Conrad - Legate of Pope Honorius III.  - the Montpellier Medical School. By the end of the thirteenth century, the school's reputation was legendary.

In 1289 the medical school was given university status by Pope Nicholas IV . The university has been shaped by Jewish, Arab and Christian cultures alike. Followers of all the cultures mentioned studied there. This was an almost revolutionary situation, to which the university owed its enormous progressiveness. Montpellier was founded in 1349 by King James III. of Mallorca to the French King Philip VI. Sold by France to fill the war chest in the battle against Peter IV of Aragon to retake Mallorca. The city was the second most important in the French kingdom after Paris. But in the second half of the 14th century the city lost more than a third of its population due to epidemics.

Early 15th century, the city experienced an economic boom thanks to its neighboring port Lattes and a commercial genius named Jacques Cœur , financier of the French king Charles VII. In this period of economic prosperity, the medical school made a vegetable garden (1593-Jardin des Plantes) the can still be visited today and is the oldest of its kind in France. After further growth, the Bishop of Maguelone finally moved to the neighboring parish of Montpelliéret in 1536, which was later taken over by Montpellier (see Archdiocese of Montpellier ). The Saint-Pierre Cathedral was built on the site of the Saint-Benoît Monastery (founded in 1364). In the 16th century, the Huguenots gained more and more influence in the city, also due to the Huguenot Wars , which led to the Huguenots of France being pushed back to the south. After 36 years of war, the Edict of Nantes in 1598 brought peace to the city for the next 20 years.

Louis XIII of France waged war against the Huguenots despite the Edict of Nantes. He besieged the city in 1622 and captured it after two months.

But through the strong resistance of the Huguenots, especially in La Rochelle and Montauban , the king finally recognized the Edict of Nantes in the Peace of Montpellier on October 21, 1622. In order to nip any future resistance in the bud, Cardinal Richelieu had a huge citadel built right outside the city gates. Montpellier became the administrative center of the lower Languedoc. In the Edict of Fontainebleau in 1685 the Edict of Nantes was revoked and the Catholic religion was established as the only state religion. There was a mass exodus of the Huguenots from France. In 1693 the Arc de Triomphe Porte du Peyrou was inaugurated in honor of Louis XIV and his victory over the Huguenots in Montpellier.

Industrialization turned the city into a regional industrial center in the 19th century, and in the 1960s the immigration of French Algerians (“ pieds-noirs ”) ensured rapid growth (see demographics).

The socialist Georges Frêche was elected mayor in 1977. The cityscape changed rapidly under his leadership. During his tenure, u. a. built the Antigone , a social housing estate in the post-modern “Roman style” in the east of the city center. Montpellier changed from a major city in the south of France to a metropolis with a strong international influence. So it has u. a. an international orchestra, a modern dance center , the Corum congress center and an exhibition center. The RadioFrance Festival and the Montpellier Danse Festival also take place there.

In 1943/44 the Navy maintained a naval hospital in Montpellier.

During the first half of the 20th century, Montpellier recorded low population growth, averaging 0.47% per year. Thereafter, growth exploded to an average of 2.2% per year between 1954 and 1999 with a record growth of 5.3% between 1962 and 1968. These were the years in which the " pieds-noirs " fled Algeria to France . According to INSEE projections , Montpellier had 244,100 inhabitants in 2004. This made Montpellier the eighth largest city in France before Bordeaux. With its enormous population growth, Montpellier has been at the fore in France for years.

The city is an industrial center and is known for medical technology, metal processing, printing industry, chemicals, agricultural technology, textiles and wine production.

The Joffre high school inside the Citadelle de Montpellier

Today Montpellier is one of the largest student cities in France, alongside Paris , Toulouse and Aix-en-Provence . With more than 60,000 students, every fourth resident of the city is enrolled in one of the numerous universities.

Today there are three universities in Montpellier .

There are also several grandes écoles in Montpellier: 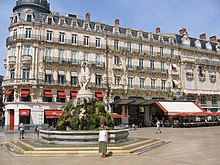 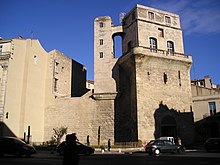 → Main article : List of sons and daughters of the city of Montpellier

Famous sons and daughters of Montpellier include the botanist Pierre Magnol , the statesman Jean-Jacques Régis de Cambacérès , the philosopher and religious critic Auguste Comte , the singer Juliette Gréco and the politician Jean-Luc Dehaene .

Montpellier's Aéroport International de Montpellier Méditerranée airport is located around twelve kilometers southeast of the city center near the Mediterranean coast. The airport was used by around 1.2 million passengers in 2009.

The most important station is Montpellier-Saint-Roch in the city center, from which Paris can be reached in 3 hours 19 minutes since the completion of the LGV Méditerranée high-speed line . The connection between Montpellier and LGV Méditerranée near Nîmes is under construction and in 2017 Montpellier is to have a new train station halfway to the airport for TGV traffic . A further extension of the high-speed line to Perpignan with a connection to the existing line to the Spanish border and on to Barcelona is in the planning stage under the name LGV Languedoc-Roussillon .

The public transport is by the Transports de l'Agglomération de Montpellier (TaM) performed. This operates numerous bus routes and four tram routes in the region. A fifth tram line is under construction. The TaM also operates the Vélomagg bike rental with 1200 bikes.

Motorway : A 9 and A 7 (via Rhône Valley) or A 75 (via the Massif Central with the viaduct at Millau between Clermont-Ferrand and Béziers )

Municipalities in the arrondissement of Montpellier