The title of this article is ambiguous. Further meanings are listed under Tiberias (disambiguation) .

Tiberias ( Hebrew טְבֶרְיָה Ṭverjah ['tvɛrja], Arabic طبرية, DMG Ṭabariyyā ; partly also Tiberius ) is a city in Galilee in the state of Israel ( northern district ) on the west bank of the Sea of ​​Galilee , which is also called "Sea of ​​Tiberias" after the city. Tiberias is one of the four holy cities in Judaism , along with Jerusalem , Hebron and Safed .

Tiberias on the Sea of ​​Galilee. View of the promenade at the harbor 2004

Seen from the lake

The city was built by Herod Antipas from the year 17 and replaced Sepphoris as the capital of the Tetrarchy of Galilee - Perea in the year 19. The date of its foundation comes from dated coins bearing the inscription Tiberias . Herod chose the name in honor of the Roman emperor Tiberius . The city was built in the Roman-Greek style with palaces and typical Roman buildings such as a forum , theater and racecourse. The Jewish cemetery in the neighboring village of Hammat was built over, which is why the city was initially avoided as "unclean" by believing Jews . According to early Christian sources, John the Baptist was executed in Tiberias before the year 30.

After the destruction of Jerusalem in 70 , the city soon became the spiritual and religious center of the Jews. At the end of the 2nd century Shimon ben Jochai declared the city to be “pure”, and at the beginning of the 3rd century Tiberias took off again with the seat of the Sanhedrin and a famous yeshiva . Here the Mishnah was completed around 210 , the Gemara was created around 400 and the Palestinian Talmud was completed here by around 450 and the Masoretic text of the Old Testament was established.

In 637 the city was conquered by the Muslim Arabs . However, it was still inhabited by Jews. In 1099 the crusaders conquered the city, which they used as a base after being fortified by a city wall. Tiberias was the center of the Galilee Principality within the Kingdom of Jerusalem . On July 2, 1187, after a brief siege, the city was conquered by Sultan Saladin , only the citadel of Tiberias still offered resistance. On July 4, 1187, the united army of the Crusaders who tried to terrorize Tiberias was defeated in the battle of nearby Hattin , so that the city fell again to the Muslims. The Jewish scholar Maimonides , who died in Cairo in 1204 , was buried in Tiberias according to his wishes. In 1240, under diplomatic pressure from the crusade Theobald IV of Champagne , Sultan al-Salih Ismail of Damascus ceded the city to the Christians, who in return hoped for an alliance with the Crusaders against Sultan al-Salih Ayyub of Egypt. Choresm mercenaries of the Sultan of Egypt sacked Tiberias in 1244. In 1247 an Egyptian army under the later Mamluk Sultan Baibars destroyed the city, which was only repopulated under Ottoman rule (from 1517).

In 1561 Joseph Nasi , Duke of Naxos , a Sephardic Jew who fled from Portugal before the Inquisition , received Tiberias and seven smaller towns in the vicinity from Sultan Suleyman I. Supported by a Ferman of the Sultan and with the money of his aunt Dona Gracia Nasi , he restored the city walls.

Today's old town, located on the lake, was built around 1738 under the rule of Dhaher al-Omar , and the city wall, which is still partially preserved, was built on the remains of the old city walls from the time of the Crusaders. In an earthquake in 1837, the city wall was destroyed and only partially rebuilt. In the middle of the 19th century the importance as a Jewish settlement increased again due to the increased Jewish immigration ( Alija ). At the beginning of the 20th century, the first residential quarters were laid out outside the city wall. During the great flood in 1934, the old town on the bank and the city walls were destroyed again. The city wall was not rebuilt as a result, the residential areas were increasingly built in higher places. In 1940 the city had 12,000 inhabitants, half Arabs and half Jews. When the Israeli War of Independence broke out in 1948 , the Arabs fled the city or were driven out of it, the old town was destroyed again in the war and then largely rebuilt. In the period after the founding of the state, Tiberias had the status of a development city .

Archaeological excavations have been taking place for years. The ancient amphitheater is to be reopened to the public in the future.

Tiberias is located in the Jordan Valley and extends on the west bank of the Sea of ​​Galilee , which is 212 m below sea level, up to a height of 457 m above the water level of the lake (245 m above sea level).

Tiberias is the center of the intensively used agricultural area. Vegetables and fruit, mainly bananas , dates and grapes are grown here. Due to the mild winter climate, early vegetables can also be grown for export.

The city is also a major tourist destination . This is due on the one hand to the mild climate and the sulfur and radon thermal springs , and on the other hand to the many Christian and Jewish sites in the area of ​​the Sea of ​​Galilee . Christians mainly visit Tabgha , the Mount of Beatitudes , Capernaum and the Christian baptismal site Jardenit , the Jews ' main goals are the graves of the Jewish patriarchs , but also the graves of the famous rabbis Maimonides , Jochanan ben Sakkai and Akiba , who is after the Jewish bar -Kochba revolt against the Romans had been executed, as well as the grave of his pupil Rabbi Meir . The amphitheater discovered in 1990, according to findings from 2010, does not date from the 2nd or 3rd century AD, as originally assumed, but was built shortly after the city was founded.

Sons of the city

This list contains an overview of personalities born in today's Tiberias. It is irrelevant whether the people later had their sphere of activity in Tiberias or not. Many moved away after their birth and became known elsewhere. The list does not claim to be complete. 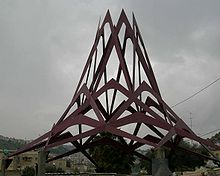