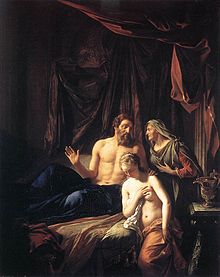 Parent narrative or traditional fathers story refers to the collected narratives about the ancestral fathers and ancestral mothers of the Israelites in the 1st book of Moses ( Bereshit or Genesis ) of the Bible (chapters 12-50). This text unit tells the beginnings of the people of Israel as a family and clan history over three to four generations: from the parents Abraham and Sarah to their son Isaac and his wife Rebekah , the conflict between their twin sons Jacob and Esau to the quarrel and reconciliation of the twelve sons Jacob in the Joseph story .

The twelve sons of Jacob, Abraham's great-grandchildren, are biblically the ancestors of the twelve tribes of Israel , i.e. the entire people, whose story is told from the second book of Moses . Israel's God YHWH had promised Abraham the emergence of this people at the beginning of the ancestral story (Gen 12: 1-3); at the end he confirms this promise of blessing (Gen. 50: 24ff.). The reconciliation of the sons of Jacob after his death thus forms the "political life program for Israel". According to its own context, the entire story covers a huge period from the Noah covenant after the Flood (Gen 9) to the slavery of the Israelites in ancient Egypt (Ex 1). In fact, however, it already reflects the later settlement of the promised land of Canaan , about which the other biblical books tell. The development process of the narrative from the first individual texts to the final composition of the Torah (the Pentateuch) is very complex and controversial. The consensus today is that the final editing, which linked the ancestral narrative with the preceding prehistory (Gen 1–11) and the following Exodus narrative, was around 450–400 BC. Happened.

The “ Abrahamic religions ” Judaism , Christianity and Islam are each traced back in their own way to the ancestral narrative.

The biblical exegesis traditionally emphasized the role of the three patriarchs Abraham, Isaac and Jacob, in the name of patriarchal history . Today, the terminology 'father parents' or' father parents' stories' is gradually gaining ground because “women (Sara, Rebekka, Rahel and Leah) as' father mothers' or 'ancestors' [...] in these stories despite their patriarchal character are essential ". “Even where men seem to be in charge, women play a decisive role.” The prefix ore comes from the Greek arch- “first, highest-” and refers to the sequence and at the same time ranking of these people in the overall biblical history Israel.