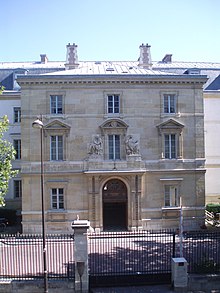 The ENS Paris is a typical Grande École

The French Grande école (French, German “Big School”) is a specialized university, which usually teaches a certain subject or a group of related subjects, but combines the subject with many general educational and personal development elements. These schools function as training centers for the leadership elite in the state, military, business, science and culture and accordingly form the most respected group in the French higher education system . They rank well ahead of universities in terms of prestige.

However, there is no legal definition of a Grande École and the term is not protected. Usually, the term therefore extends to the member universities of the Conférence des grandes écoles . An alternative term is École Supérieure .

In the course of the Revolution (1789–1799), the French universities that had existed since the Middle Ages were dissolved (the Sorbonne, for example on April 5, 1792) or closed. It was not until Napoleon in 1808 that universities were re-established in 12 cities. Parallel to the universities, which were further divided into faculties and were responsible for the traditional subjects of law and medicine as well as the general education "lettres" (literature / philosophy / philology), universities of a new type were gradually created related to a single subject or a group of closely related disciplines and should provide the state with loyal and competent specialist officials. An important feature of these institutions from the outset was the limited number of study places based on the expected graduate needs and the restricted access channeled through entrance exams ( concours ) . When the chambers of industry and commerce began to establish business schools (écoles de commerce) in the later course of the 19th century , they followed the model of state universities.

The successors of these institutions, today's Grandes Écoles, have long since developed into elite universities, not least thanks to the strict selection they can practice. In those subjects, e.g. B. Economy, where there are several Grandes Écoles , comparisons within the relevant category are possible and rankings are a matter of course. The traditional, older Grandes Écoles are also more prestigious than younger establishments and those in and around Paris are almost always more valued than those in the provinces.

Candidates for a military grande école ( Saint-Cyr ) in a parade

The training at a Grande École normally lasts three years ( 2 ème or 2nd cycle ) and ends with the diplôme or a master’s degree: In order to be admitted to the entrance examination, applicants must for two years after the “bac” Have attended classes préparatoires (prépas) that prepare students for the university category in question. These preparatory courses are usually selected from high schools, more rarely directly from the Grandes Ecoles offered ( one he cycle ). The participants in the prépas have a lot of work to do, are taught by the best teachers of the relevant high schools and are usually highly motivated. If you do not get a place at the desired university or at least a university category in the Concours , you can enroll at a university, usually in the third year of study. They are by no means considered failures there, but rather as students with solid previous knowledge and high potential.

The limitation of the number of study places and the corresponding concours are an important control element for the sponsors of the Grandes Écoles (state or private sponsors). The expected demand for graduates is determined as precisely as possible and, as with an advertisement, the corresponding number of study places is allocated every year. For some time now, a certain degree of uncertainty has arisen from the fact that the proportion of women among those admitted to the degree is growing rapidly, but by no means all of the female graduates take up the positions intended for them.

A Bachelor's degree is usually required for admission to a Master’s program .

Those who are once admitted and thus become élève (French for “pupil / pupil”, the traditional name of the students of the Grandes Écoles ) usually successfully complete their studies. Dropouts are practically unknown because of the strict selection process during admission - unlike at the freely accessible universities, where around 40% of first-year students remain without a degree. The main goal of the “Eleven” is often a good place on the ranking of the graduates of their doctorate , i. H. of your year: the higher the place on the list, the greater the chances of being able to choose one of the best of the available positions. This is especially true of the State Corps.

Students at some state Grandes Écoles , if they undertake to enter the state service and stay there for ten years, receive a salary while they are still studying. The majority of state grandes écoles only charge low tuition fees, but non-state grandes écoles , especially most commercial colleges, sometimes charge high tuition fees, which companies pay for some students in the form of grants.

The Grandes Écoles offer good study conditions: excellent teaching, including from many lecturers from practice, intensive personal support, modern teaching aids, stays abroad, etc. Ä., But also motivated, mutually motivating fellow students and the awareness of common belonging to an elite. This sense of togetherness and belonging is naturally carried over into professional life in the state and in the economy, where it leads to the creation of networks of relationships among the alumni, the anciens élèves , networks that are often perceived as impenetrable by outsiders.

One of the weaknesses of the Grandes Écoles , which has recently come under increasing scrutiny, is the traditionally small number of research institutes located there and thus the lack of a connection between research and teaching. There is also often a lack of well-established doctorate opportunities. The latter does not cause much offense in France, however, because the doctorate there traditionally only plays a role at universities and brings far less social prestige than in Germany.

Another problematic point is the narrowness of the sociological recruitment base of the Grandes Écoles . It arises primarily from the starting advantage of applicants from middle-class circles who have been sent by their families to the best grammar schools and the best preparatory classes and who bring with them the expressions and manners expected by the concours examiners from their milieu. The elite universities teach the "subordination of learning to the pressures of urgency" and favor the candidates who "can stay cold-blooded". In retrospect, due to the social homogeneity of the fellow students, the graduates often have “the enchanting experience of a social paradise”.

The engineering and business schools are the most common types. Of course, these in particular differ greatly in their reputation and selectivity.