The Institut d'études politiques de Paris (IEP de Paris) (German: Institute for Political Studies Paris ), usually called Sciences Po , is a grand établissement in the 7th arrondissement of Paris . Together with the Collège de France or the elite university for social sciences École des hautes études en sciences sociales (EHESS), the institute enjoys the highest scientific prestige of all higher education institutions in France thanks to its administrative status .

The 2020 QS World University Ranking, together with Princeton, ranked the university in 2nd place worldwide for politics and international studies, behind Harvard . Sciences Po accepts less than 10 percent of all applicants. 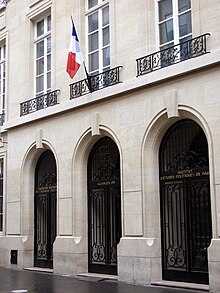 The private university École libre des sciences politiques , founded by Émile Boutmy in 1872, was nationalized in 1945 and divided into the Institut d'études politiques de Paris (IEP) and the Fondation nationale des sciences politiques (FNSP). After the Second World War and until the 1990s, the newly founded institute mainly prepared for the concours (entrance examinations) for the most important administrative colleges in France, in particular the École nationale d'administration (ENA). In fact, the majority of ENA students come from the Paris IEP. In 2008, for example, of the 80 applicants accepted, 62 had previously completed training at Sciences Po. The result is that the political elite in France consists almost exclusively of IEP graduates.

Above all, due to the reforms introduced under the director Richard Descoings , who has since passed away , the academic focus is much broader today and includes not only political science , but also, for example, law , economics , finance , marketing , communication , urbanism / town planning , management or journalism . Accordingly, over 80% of graduates today turn to the private sector after graduating. In fact, most of the members of the French business elite, e.g. B. the CEOs of large companies, at least for a few years at Sciences Po, since a Sciences Po diploma in France was often considered a ticket to elite secondary schools. Today, however, studying at the Paris IEP is a well-rounded five-year course that ends with a master’s degree - not least due to the introduction of a compulsory year abroad in the 5th and 6th semesters and a mandatory internship of usually six months in the last two years of study .

Status in the higher education system in France

Sciences Po is one of the so-called Grandes écoles of France, where the study admission is highly selective and the social status of the degree is higher than that of most other universities. Sciences Po also has the status of a grand établissement . It is an administrative status that only a few institutions are granted. This gives Sciences Po a relatively high degree of autonomy from the French Ministry of Education. B. independently decide on the charging of tuition fees. In general, it is one of the best universities in France, together with the natural science École polytechnique , the administration academy ENA and the business school HEC , and is one of the most renowned universities in the world in the field of social sciences .

Sciences Po is considered to be particularly internationally oriented. 40 percent of the students come from abroad. The establishment of the so-called campus internationaux outside Paris made a particular contribution to this development . They have geared their academic program to another country or region and also offer courses in the relevant languages, so that foreign students are particularly attracted to these programs. However, only a bachelor's degree can be completed on this campus; all students come together in the predominantly French-language master’s course on the Paris campus.

The IEP has more than 300 partner universities around the world where students spend their 5th and 6th semesters unless they choose the option of a long-term internship. Double master’s programs are also offered by a number of prestigious universities around the world (see below). Sciences Po is a member of the Global Public Policy Network (GPPN), which also includes Columbia University New York, King's College London , the London School of Economics and Political Science (LSE), the Hertie School of Governance in Berlin and Lee Kuan Yew School of Public Policy of the National University of Singapore (NUS).

The IEP de Paris is historically based on the École libre des sciences politiques , a private higher education institution founded by Émile Boutmy in 1872, which was already nicknamed 'Sciences Po' at that time. After the defeat in the Franco-Prussian War (1870/71) , the new facility, according to Boutmy's will, should ensure better training for the country's political and administrative elite. In 1945 the institution was nationalized and turned into a public university. The newly created Fondation nationale des sciences politiques (FNSP) was given the legacy of the École libre des sciences politiques and the task of ensuring the financial and administrative operation of the IEP. Together, the IEP and the FNSP form what is known today as 'Sciences Po'.

Until it moved to Strasbourg a few years ago, the ENA administration school was located right next to the Sciences Po building, and both schools were only separated by a garden. “Go across the garden” (“ traverser le jardin ”) was what people used to say when they managed to get accepted to the ENA after graduating from Sciences Po. Even today, the majority of ENA students are graduates from Sciences Po. After the move, the former ENA buildings were taken over by Sciences Po.

After Richard Descoings became director in 1996, there were numerous reforms. Above all, there was an enormous internationalization of the once French university, which today has almost 40 percent foreign students. The course has been extended to 5 years as part of the Bologna process (and ends with a master’s degree ), a year abroad has been introduced and a large proportion of the teaching is in English. Since 2010 it has been possible to acquire a Bachelor's degree after three years of study. In addition to the main campus in Paris, further undergraduate campuses were founded in Nancy , Poitiers , Menton , Le Havre and Dijon (and from 2010 Reims ), the international campuses (formerly premiers cycles délocalisés ), where two of the three years of the bachelor's degree are held can complete (see below).

Sciences Po is enjoying increasing popularity, with the number of applicants and students doubling in the last 10 years. In 2001, admission to Sciences Po was made easier for students from socially disadvantaged neighborhoods, which in France led to heated controversy in politics and society.

About the term 'Sciences Po'

The term Sciences Po is in itself an acronym for sciences politiques (French for ' political science ') and in today's parlance also means other university institutions, which, however, do not exclusively offer political science courses.

Sciences Po refers to the entity that succeeded the École libre des sciences politiques founded in 1872 in 1945 and today consists of the following institutions:

Following the example of the Institut d'études politiques de Paris, further Instituts d'études politiques were founded throughout France in the post-war period. Some of these have also extended the original three-year study period to five years, following the reform of the study program at the IEP Paris. In contrast to the IEP de Paris, which is an independent university run by the Fondation Nationale des Sciences Politiques , the " IEP de province " are integrated into the local universities and are therefore not a grand établissement .

Unlike the IEP de province , the campuses in Nancy , Dijon , Poitiers , Menton and Le Havre (as well as Reims from 2010 ) are full components of the Institut d'études politiques de Paris.

In addition, the word 'Sciences Po' is used colloquially for political science universities in French-speaking countries, such as the Institut d'études politiques in Algiers or the Institut des sciences politiques of the Université Saint-Joseph in Beirut . 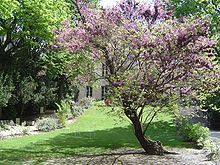 View of the garden

There are several options for admission to Sciences Po; however, you cannot apply for several admission procedures at the same time.

In the premier cycle , a three-year basic course , the course imparts basic knowledge in the areas of constitutional law, political science, sociology, economics and history and ends with a bachelor's degree.

Around two thirds of the students complete a regular undergraduate degree in Paris; a growing minority, however, opts for one of the campus internationaux (“international campuses”) outside Paris, which enable French students to specialize and facilitate integration for international students. The basic course is basically the same as in Paris, the most important lectures are recorded in Paris and offered as e-cours on the campus (some lectures also take place on the campus) and the exams are corrected centrally in Paris to reflect the same To ensure learning content and the same level as in Paris. However, special emphasis is placed on high-quality language training on international campuses. Classes and lectures take place there in three languages ​​(French, English and a third language depending on the country focus of the campus). Language courses in at least two foreign languages ​​are compulsory; a third foreign language can also be chosen if the student has good academic performance.

During the subsequent four-semester master’s degree, students specialize in one subject. The following master’s programs are offered:

In addition to the masters mentioned above, Sciences Po is increasingly offering double master’s degrees in collaboration with renowned universities around the world. As a rule, part of the master’s program is spent in Paris, the other part at the partner university. Upon completion of the program, students will then receive a master's degree from both Sciences Po and the partner institution. Some programs, such as the one with HEC Paris, are completely independent and have their own study plan for the entire duration of the program. B. the programs with the LSE are organized in such a way that part is completed as part of one of the normal master’s programs mentioned above.

There are currently the following double master’s degrees:

The institute maintains the so-called École doctorale, which prepares doctoral students for their doctorate. Since 2004, this school has been responsible for the master's research ( program doctoral since 2009 ). Sciences Po also offers MBA and MPA programs and prepares specifically for European and national administrative competitions (especially the European Union and ENA Concours).

The École Doctorale at Sciences Po has 38 full-time employees. Around 570 doctoral students are supervised (2004).

The Institut d'études politiques de Paris has the following nine research institutions, which are among the best research centers in France in the field of social sciences:

Sciences Po's library is the largest university center for contemporary documentation in the humanities and social sciences in continental Europe. It houses 900,000 works (including 620,000 books and 4,500 newspapers and magazines), 10,000 magazine articles selected annually, 2 km of shelves with direct access, 60,000 micro cards and films as well as 400 electronic magazines. 40% of the works are in French and another 40% in English.

With 900 catalog entries, 30 new publications per year and 10 different series, the 'Presses de Sciences Po' are one of the largest social science publishers in France.

Sciences Po's graduates include 28 former or current heads of state and government, including the five last French Presidents Emmanuel Macron , François Hollande , Nicolas Sarkozy (albeit without a degree), Jacques Chirac and François Mitterrand , 13 French Prime Ministers (only six of the the previous 19 prime ministers were not Sciences-Po graduates) and a former UN Secretary General. The college also trained 14 CEOs from the 40 largest French companies. Since 1958, the founding of the Fifth Republic , the vast majority of all ministers and ambassadors of France have graduated from Sciences Po.

Heads of State and Government

Left without a degree

Sciences Po has so far awarded honorary doctorates 15 times to the following personalities:

V - D
Universities and institutions with university status in France