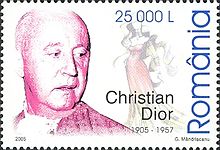 Christian Dior on a Romanian postage stamp from 2005 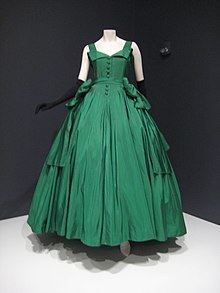 Dior dress in a retrospective at the Indianapolis Museum of Art

Dior was born in Normandy as the son of a major industrialist . After school, he began a political science training in the diplomatic service and successfully completed it, although he had actually wanted to become an architect . He began his later career, financially supported by his father, initially as a gallery owner in Paris . As his father's company as a result of the global economic crisis in 1931 in bankruptcy went, Dior started a fee first hat fashion for the fashion supplement of the newspaper Le Figaro and finally fashion sketches for Parisian haute couture to design fashion houses. The fashion designer Robert Piguet hired the talented painter and draftsman Dior in 1938 to design fashion for him. One of the first dresses designed by Dior for Robert Piguet was worn on July 1, 1939 at the Circus Ball in Versailles. The buyer of the dress was the Brazilian jet setter Aimée de Heeren (1903-2006), who was introduced to the entrepreneur and later Dior investor Marcel Boussac at the Coco Chanel ball . The ball was the last major social event in France before World War II . Dior did military service during the war years and moved from Paris to the south of France in 1941 to run an orchard. Before the end of the war, he returned to Paris. After working there for three years with Pierre Balmain for Lucien Lelong's fashion team, Dior was hired by the wealthy textile manufacturer Marcel Boussac in 1946 to take over the artistic direction of a new haute couture house to be founded by Boussac should be funded.

The company Christian Dior SA was founded in 1946 with a registered capital of 60 million francs. On December 16, 1946, Dior set up an atelier on the elegant Avenue Montaigne in Paris, where the Dior brand's Parisian flagship store is still located today . The very first fashion collection that Dior presented on February 12, 1947, was a great success and celebrated by American journalists as the " New Look ". The term goes back to a remark by the former editor of Harper's Bazaar , Carmel Snow, opposite Christian Dior after the fashion show : "[...] . Your dresses have examined a new look " (dt .: Your dresses have such a new "look" ). Dior's fashion was characterized by a narrow waist , a figure-hugging or corset-supported top, wide, swinging skirts made of noble materials in lavish quantities, as well as wagon wheel hats and long gloves . These feminine and elegant Dior designs represented a departure from the austere, practical fashion of the war years. Dior himself had named his collection Ligne Corolle ("calyx line") and pointed out that it was influenced by the fashion style, Edward Molyneux had already shown before the Second World War . Critics criticized the wasteful use of scarce resources and a return to feminine-romantic fashion in times of emancipating women, but Dior's influence was considerable: within a few months, his high-priced haute couture designs were picked up by the mass market, and thus the Dior style also reached the woman on the street in the 1950s, which in turn served the prestige of the Dior family. Dior was instrumental in ensuring that Paris was once again the fashion capital of the world after New York outstripped her during the war years. His star photographer Willy Maywald also had a share in the media success . He documented all collections and fashion shows with fashion art photographs and placed them in relevant international fashion magazines.

Because of his influence, Dior was almost called a ' fashion dictate ': in the years that followed, he presented a new 'look' for each season, which the fashion industry and its wealthy customers willingly followed. After the calyx line he showed the dome line , then the lily of the valley line ; then again the pencil line , later the H-line , and after the A-line finally the Y-line , which was, so to speak, the opposite of the previous A-line . Coco Chanel , who herself propagated casual, emancipated, sporty and practical fashion, is said to have said about Dior's creations in 1954: "Those heavy, stiff clothes that don't even fit in a suitcase, ridiculous ...".

Dior recognized the value of the perfume business early on and in 1947 launched the women's fragrance Miss Dior, which is still available today, as the first perfume from the newly founded Christian Dior Parfums SA. Dior also made use of the license business. With numerous profitable licenses that he granted worldwide, he built up a fashion empire in just a few years. German companies also received a Dior license shortly after the war. Pierre Cardin was the first tailor in the Dior design team until 1950 . The Dior fold he created was named after Christian Dior . He was the first fashion designer to appear on the cover of Time Magazine in April 1957 . In the article mentioned, Dior was called "a kind of King Barnum of fashion". At the time he was considered the most famous and influential couturier in the world, and the Dior company was a global corporation. His customers included Queen Elizabeth II and Princess Margaret , Soraya of Persia , Marlene Dietrich , Evita Peron , Olivia de Havilland and Rita Hayworth .

On October 24, 1957, Christian Dior, a passionate eater, died in the Italian spa town of Montecatini Terme under circumstances that have not yet been fully clarified . A heart attack is believed to be the most likely cause of death . He had suffered two heart attacks in the previous years. The funeral, which was attended by two thousand people alongside Jean Cocteau and the Duchess of Windsor , took place in the Saint-Honoré- d'Eylau church in Paris. Another five thousand people and a sea of ​​flowers waited outside.

Dior was considered a reserved, shy, modest man who usually felt uncomfortable in society at public occasions. His homosexuality was not discussed in the public at the time. Dior made the young Yves Saint Laurent his assistant in 1953. Dior's licensing policy for cosmetics, stockings and accessories turned into a successful marketing strategy after his death and found numerous imitators in the fashion industry. In 1957, Saint Laurent succeeded Dior as chief designer at Dior.