Catwalk ( Catwalk ) for Michalsky StyleNite at the Berlin Fashion Week

A fashion show (also: fashion show) is a staged presentation of clothing fashion . The designs of fashion designers are mostly of mannequins or models on the catwalk ( Catwalk presented). The scope of such demonstrations is not strictly defined. Traditionally, a fashion show ends with the joint appearance of all previously presented models and the bowing of the fashion designer in front of the audience . A fashion show can be held for individuals, a small group, or an international audience.

A fashion show, such as that shown by the great designers, usually lasts 10 to 15 minutes. The process is not standardized , but a certain standard sequence has been established: The fashion show begins with the opening model, which the other models follow one after the other, sometimes side by side. Depending on the number of models and the scope of the collection, each mannequin only shows one outfit or changes behind the stage with the help of assistants and shows several outfits in one show. The running styles of the models at fashion shows can be differentiated between 'classic / natural' (prêt-à-porter), 'dramatic / sexy' (haute couture) and 'sporty'. Some fashion shows combine women's and men's fashion, or even children's clothing, while other fashion shows are separated by gender (and age). At the big couturiers , the fashion show often ended with a bride model. In the end, all models appear again before the designer shows himself on the catwalk and, if necessary, bows to the applauding audience. The audience usually sits left and right along the catwalk looking towards the models. After the fashion show, the audience usually leaves the venue or, depending on the organization of the fashion show, may go backstage to take a closer look at the models and possibly get in touch with the fashion designer.

A fashion show is usually preceded - more or less elaborately in individual cases - by inviting the guests, casting the models, adjusting the clothes in the designer's studio, determining the sequence of appearances for the models, selecting the venue, and setting up the catwalk and the hall seating, if necessary the creation of seating arrangements for important guests, the transport of the clothes to the venue, one or more test runs, the selection of accompanying music, sound and light checks , if necessary the provision of catering and hall arrangement staff, etc.

Until the 1980s, it was common for the demonstrating models to carry small signs with numbers that made it easier for buyers (e.g. the large fashion retailers) to place orders after the demonstration . Nowadays this is rather rare. The viewers receive catalogs or so-called lookbooks in which they can find the models with order numbers. Depending on the company, only the models of the fashion shows are actually put into production, for which enough orders are placed by buyers, such as retailers, after the presentation .

There are also fashion shows that are moderated by an emcee .

At the haute couture fashion shows (French: 'upscale tailoring') reserved for women’s fashion , the elaborate items of clothing are usually handmade items, specially created for the catwalk and directly adapted to the respective models. Nowadays , the designs shown are not primarily about wearability, but rather the setting of trends for the design of ready-to- wear clothing or accessories, as well as the attention of the press for the fashion house or the designer and thus for their image .

The clothes of the prêt-à-porter fashion shows (French: 'ready to wear') are usually made in standard sizes and, depending on their exclusivity, are brought onto the market in different numbers up to mass volumes. The ready-made goods shown on the catwalks are then, in contrast to haute couture, offered for sale off the shelf.

Unlike the classic fashion shows, where models with clothing sizes up to 36 present, plus-size fashion shows (fashion shows for large sizes) show women's fashion in clothing sizes between 38 and 56. The first fashion show of this kind was Full Figured Fashion Week in New York in 2009 , followed by the British Plus Size Fashion Weekend 2013 in London, the Pulp Fashion Week 2013 in Paris, the fashion show as part of the Curvy is sexy 2013 trade fair in Berlin and the Plus Size Fashion Days Hamburg 2013, which have taken place regularly since then. In order to underline the presence of fashion in large sizes, most of these - comparatively smaller - fashion shows take place at the same time as the major fashion weeks, but are not organized by the same organizers. Fashion labels specializing in large sizes are shown almost exclusively, presented by special plus-size models .

The important shows are carried out regularly by the major fashion companies, usually twice a year at fixed dates for both women's and men's fashion, in order to primarily present their haute couture and prêt-à-porter collections for the spring / summer and autumn / Show winter. With their designs, the fashion designers try to set new fashion trends . The fashion shows of the major fashion brands mainly take place during centrally organized fashion weeks, during which numerous designers, one after the other, present their collections to the most loyal customers, important buyers, the international press and other audiences within a few days . Access to these events is normally reserved for invited guests . In recent years, however, more and more important fashion brands such as Burberry or Jil Sander have started to show their shows via live stream and then as a compilation on their own website on the Internet . 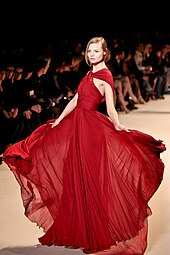 In addition to the best customers of the fashion companies (private individuals and retailers ), internationally known fashion journalists such as Anna Wintour ( Vogue USA), Suzy Menkes ( IHT ) or Hilary Alexander ( The Daily Telegraph ) and numerous celebrities attend these fashion shows . The latter are often specifically invited by the fashion brands in order to generate a lot of media interest. Since the late 2000s, fashion bloggers were increasingly among the invited guests of the press at the international fashion shows . The ready-to-wear models shown there are usually intended for the season in the following year and are available in stores six months after the show; For example, the spring / summer 2011 presentation took place in mid-2010, and the models went on sale in early 2011. The haute couture fashion, which is presented exclusively in Paris, is adapted to a small group of customers in the respective atelier of the fashion designer and is otherwise not available on the market.

The Berlin Fashion Week was established in Berlin in 2007 . In Florence , the Pitti Immagine is held before the Milan shows . There are also fashion shows of regional importance in Antwerp , Vienna , Düsseldorf , Stockholm , Tokyo , Rio de Janeiro , São Paulo , Moscow and Mumbai, among others . While in Krefeld annually the largest street fashion show in the world takes place in Vienna at the public opening of the Life Ball international top models and other celebrities on the red ribbon - Catwalk to admire.

For many years, the world's largest fashion fair was the Collections Premiere Düsseldorf (CPD) organized by Igedo and shown for the last time in 2012 . It was replaced by Bread & Butter Berlin and the Berlin premium fashion fair (both since 2003).

In 2007, the Italian fashion house Fendi was the first fashion company in the world to hold a fashion show on the Great Wall of China . Chanel often shows its collections in the Parisian Grand Palais , which is particularly lavishly decorated. A special feature is the StyleNite by Berlin designer Michael Michalsky , who shows his fashion show as part of Berlin Fashion Week and combines each with shows and performances by other artists.

In Milan and Paris, the women's and men's fashion demonstrations take place separately on different dates. Until 2012, the last day of London Fashion Week in London was devoted to men's fashion; Since June 2012, the so-called London Collections: Men have been taking place over several days as a separate men's fashion week in London at the beginning of January and mid-June (the London Collections: Women event has served as a presentation forum for preliminary collections of women's fashion since summer 2012, alongside London Fashion Week). In New York and Berlin, both women’s and men’s fashion are presented in the same week.