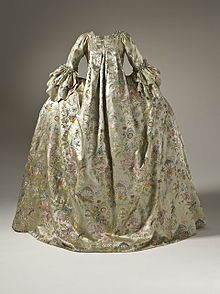 Menswear: Sign for a purveyor to the court in London's Savile Row 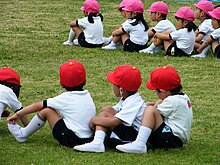 Dress fashion refers to the fashion in the field of clothing . Conversely, clothing fashion is that part of clothing that is subject to fashion change. In contrast to the traditional term “ Tracht ”, the term clothing fashion describes a short-term customary or appropriate way (or types) of dressing, which is replaced by new fashions at regular intervals due to social change.

Thus, the term clothing fashion also implies an aesthetic meaning of clothing and goes beyond the understanding of clothing as a pure commodity. The term takes into account the fact that clothing not only serves to protect the human body from heat or cold or other impairment from the outside world, but also to make it aesthetic. This includes decorating it (according to different specifications), shaping it, highlighting its advantages or concealing components of the appearance that are perceived as deficiencies, as well as conveying an aesthetic mood, expressing an attitude towards life or making an aesthetic statement.

The taste and the attitude towards many of these aesthetic design motifs are subject to social fashions. Clothing fashion is the collective term for all clothing that is created as a result.

In ancient times they already knew the tunic and the fibula . In the Roman Empire one wore a toga or a stole , there were changing hairdresses; only the emperor was allowed to wear garments dyed with expensive purple . The clothing in the Middle Ages (500–1500) was made of flax fiber or nettle cloth and reflected the order of the class . Towards the end of the Middle Ages, in the 15th century, the imaginative fashion from Burgundy with zaddles and spikes, wide sleeves, hoods or a pointed hennin set the tone for a while. The clothing fashion of the Renaissance and Reformation (1500–1550) knew the doublet , the scarf and, as headgear, the beret . The Spanish fashion garments (1550-1620) favored the corset , the army timpani and the ruff . The clothing fashion at the time of the Thirty Years War (1610–1650) knew the slouch hat and the gauntlet boots . The clothing fashion of the time of Louis XIV (1650–1715) brought the allonge wig and the manteau and France rose to the leading and leading nation in terms of fashion for centuries. The dress mode Rococo (1720-1789) took a liking to Culottes and Contouche , while in the period after the French Revolution in the Revolution and Empire fashion the (1789-1815) fashion à la grecque developed and the men began long trousers wear. The clothing fashion of the Restoration and the Biedermeier (1817–1840) brought the Schute and the patricide . The crinoline fashion (1840-1870) knew the hoop skirt for women. The clothing fashion of the Wilhelminian era up to 1900 (1871–1900) dressed men militarily in an overcoat and the lady in a bodice .

In the twentieth century, many trends followed one another: the French fashion designer Paul Poiret , creator of the so-called hobble skirt (1910/11), was one of the first to break with old conventions by creating dresses that could also be worn without a corset. But this is sometimes attributed to Coco Chanel . The knickers , which had been worn since the 1890s, contributed to a further break-up of traditional gender-specific clothing fashions at the beginning of the 20th century. The time of the First World War brought the trench coat (English trench = trench ); Towards the end of the 1920s and the beginning of the 1930s, increasingly revealing fashion began to prevail, which is largely attributable to the designer Elsa Schiaparelli . In the 1940s the nylon stockings came and as the needs of the customers became more "minimalistic" by the Second World War, in the 1950s creations like the jeans and the T-shirt experienced a big trend. In the 1960s, the mini skirt propagated by Mary Quant accompanied the progressive sexual liberation . The 20th century was far from over with the advent of hot pants . Clothing fashion can also mean not wearing any clothes at all (see nudism , nude look ) or leaving the upper body uncovered (see above ).

As a result, clothing fashion represents a component and a mode of expression of the umbrella term fashion , which describes the total amount of prevailing behavior, thought and design patterns.

Today, the Galleria del custume in Florence , the Metropolitan Museum of Art in New York , the Victoria and Albert Museum in London and the Musée Galliera in Paris document fashion history. In Germany, one of the largest collections of fashion from the first eight decades of the 20th century, which Josefine Edle von Krepl has compiled, is on display in Meyenburg Castle .

The tailor traditionally makes clothes. You can then study fashion design . In London, for example, there is the Central Saint Martins College of Art and Design , in Munich the German Master School for Fashion .

The clothing industry uses the human desire for variety for promotional purposes and regularly designs and produces new textiles that are appropriate to the season. By changing colors, materials and models, consumers want to exchange the old, perhaps not yet worn and still fitting items of clothing for new ones in order to obey the dictates of fashion.

Fashion designers develop drafts (at least) every six months. They are presented as coordinated collections by models at fashion shows or trade fairs nine months before the start of the season. Often the work here is very artistic and experimental (not just for attention). As a result, new styles are presented very consistently and radically and the proposed innovations are made very clear and clear.

The textile industry and the textile trade are inspired by this and adopt the current ideas (color, pattern, cut, material) and develop more moderate designs from them that are "wearable" for the mass market. Today these are largely produced cheaply in low-wage countries and sold in Europe at the beginning of the season. Fashion chains like H&M put several collections on the market each season and can thus adapt to short-term trends . The European textile industry suffers from production in low-wage countries .

Even before clothing fashions are propagated by fashion designers, fashion companies and fashion houses, new aesthetic developments are heralded in society, especially among innovative, adventurous and socially critical population groups. It is not uncommon for fashion companies to track down these trends using trend scouts ( coolhunting ) and be inspired by them in their designs.

These groups, as well as fashion designers and trendsetters, play a key role in the diffusion and success of any new fashions proposed by the designers.

The hat fashion , more precisely the wearing of headgear , was the piece of clothing that was the longest lasting clothing fashion in Western culture from the 10th to the 20th century.