The following important information is still missing from this article:
As noted on the discussion page, the current use of the term in (women's) fashion is missing.
Help Wikipedia by researching and pasting it . 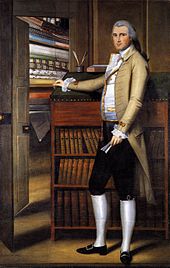 Elijah Boardman in a culotte. Painting by Ralph Earl , 1789

Culotte (from French cul = buttocks ) is the French name for knee breeches . In a narrower sense, it means the typical men's trousers of the late 17th and 18th centuries.

Shapes of the culottes

The historic culotte reached just below the knee and was very tight after 1700. To make it easier to get started, the outer seam was slit at the bottom. This slot was closed with buttons, the waistband with a knee buckle . Early Culotten (before 1750) generally had a buttoned fly in the front center while later - when the West became shorter and thus could see the pants Front - one of hip-reaching to hip Latz in style Bavarian lederhosen had the permanently attached to the collar has been. Both versions had two large pockets on the front that were closed with a button, and a small watch pocket on the right side of the waistband. The nobility wore culottes made of velvet or silk , leather for riding , the common people those made of linen or wool .

Throughout the 18th century, the culottes were common trousers in all of Western Europe and in almost all classes of the population . Therefore, they are still preserved in many folk costumes , such as alpine lederhosen. The revolutionaries of the French Revolution , on the other hand, wore long trousers, which is why they were called sans-culottes . The European nobility and conservative bourgeoisie clung to the culottes until around 1820. In the courtly gala dress it was still common until the First World War .

In the sports / Dancewear a hüftnahe gymnastics pants (may have "culotte" Slip ) be meant as the modern French word culotte general underpants referred.