Men's slip with engagement on the right

Under a slip (engl. To slip , "slip") refers to a relatively scarce, close-fitting underwear or swimsuit which is cut without leg approach. The word slip, adopted from English, is a pseudo-Anglicism , since in English slip means an undergarment .

The German designation Schlüpfer or Pagenschlüpfer or Pagenhöschen, on the other hand originally referred to the same parts with a leg approach. Long-leg panties are close-fitting, waist-high with about hand-width or longer legs. Mostly from a seamless tube that is cut open in the middle of the front and back up to crotch height in order to sew the two resulting lengths of fabric into individual legs. A gusset can also be used in the crotch area to compensate for stretch . Thus, this cut is seamless on the outer edges and does not form a visible slip line through emerging seams. Also available as a cut version of leggings .

This from hatching or the English verb to slip resulting laundry designation comes from the fact that the original underwear no elastics or rubber bands had, leaving them with ribbons, bows and buttons are held had. When, after the turn of the 19th to the 20th century, the elastic , like the trousers rubber was also called, made his triumphal entry, they called the fast underpants just panties .

Briefs are worn by both men and women in different shapes. Due to the anatomical differences, some forms of briefs are more likely to be worn by one gender or the other, unless it is cross-dressing .

A distinction was also made between summer underwear (light, double rib) and winter underwear (roughened, thick, cuprama or lining panties, with elasticized legs for women or long johns for men).

Up until the 1980s, there was an overall trend towards ever shorter forms. New names were created for the ever new styles, e.g. B. minislip, microslip or rioslip. From the 1980s onwards, more boxer shorts and bodies came on the market, and retro pants in the 1990s . 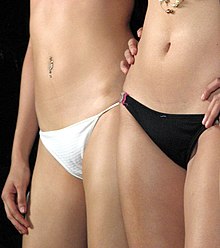 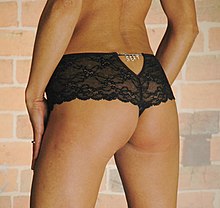 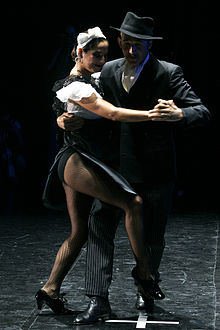 Jazz pants as part of a costume for dancing

Forms that are suitable for both sexes

The terms tanga, string, string thong and thong are often not used selectively because they are hardly mutually exclusive.

In bodybuilding, special posing briefs are worn for competitions and for show purposes. They are tight-fitting and cut so that they do not obscure the view of the muscles as much as possible. In particular, the leg muscles should remain largely free. Therefore, posing briefs sit very high and the leg cut is just as high. At the front, the covered area is almost exclusively limited to the genitals, at the back a scarcely larger triangular area is covered, at the side there is only a minimal connection (the IFBB stipulates 1 centimeter). In the front view, the posing slip is usually higher on the sides than in the middle, so that the upper edge has a concave course. At least half of the buttocks are visible from behind.

Posing briefs evolved from swimming trunks and for a long time followed the trends in swimwear. In the course of the history of bodybuilding they have been cut more and more tightly so that the bodybuilders could show as much of their muscles as possible. The trend is driven by professional competitors who mostly wear bespoke posing briefs. Today's standard, which most closely resembles a thong, can hardly be minimized.

Posing briefs are the hallmark of bodybuilders because competitors are only dressed in posing briefs. It should enable a complete assessment of body development, but not distract from the muscles. That's why posing briefs are kept simple, but can have a wide variety of colors. As a rule, they are monochrome and made from a mix of nylon and elastane .