Polyamides ( abbreviation PA ) are linear polymers with regularly repeating amide bonds along the main chain. The amide group can be understood as a condensation product of a carboxylic acid and an amine . The resulting bond is an amide bond that can be split again hydrolytically .

Polyamides are often used as construction materials because of their excellent strength and toughness. There is good chemical resistance to organic solvents, but they can easily be attacked by acids and oxidizing chemicals.

The term polyamides is usually as a term for synthetic, technically usable thermoplastic plastics used and borders this class so that the chemically related proteins from. Almost all important polyamides are derived from primary amines, because the repeating unit consists of the functional group –CO – NH–. There are also polyamides of secondary amines (–CO – NR–, R = organic residue). Aminocarboxylic acids , lactams and / or diamines and dicarboxylic acids are particularly used as monomers for the polyamides .

Polyamides can be classified into the following classes:

According to the type of monomers

According to the type of monomer composition

According to the type of softening / solidification behavior

According to these classifications, PA 6.6, for example, is an aliphatic, partially crystalline homopolyamide.

In contrast, polymers of the AA-SS type are produced by the polycondensation of a diamine and a dicarboxylic acid:

For the conversion to high molar masses, it is necessary with polymers of the AA-SS type to convert both monomers in a ratio of 1: 1. Even slight deviations from this ratio can greatly reduce the molar mass of the product. To prevent this, the monomers hexane-1,6-diamine (the AA component) and adipic acid (the SS component) are first converted into the AH salt in the PA-6.6 synthesis (nylon) . Both monomers are present in the AH salt in a ratio of 1: 1, so that weighing errors can no longer lead to a disproportion between the monomers. The AH salt is then converted into the product.

For the rational designation of the polyamides there are abbreviations consisting of the letters PA and the numbers and letters that follow. Some important representatives are standardized in DIN EN ISO 1043-1. As a rule, the numbers result from the number of carbon atoms of the monomer or monomers. Letters are used to represent monomers with an aromatic base. For example, T stands for terephthalic acid and I for isophthalic acid .

Polyamides which can be derived from aminocarboxylic acids of the H 2 N– (CH 2 ) x –COOH type or the corresponding lactams are identified as PA Z, where the number of carbon atoms in the monomer is designated ( ). PA 6 stands for the polymer made from ε-caprolactam or ω-aminocaproic acid, [NH– (CH 2 ) 5 –CO] n .

The point as a separator between the numbers is not used consistently. Sometimes it is completely left out, which can lead to misunderstandings, or it is replaced by a slash. For example, the following terms can be used synonymously: PA 6.10 = PA 6/10 = PA 610

The most commonly used polyamide is usually written PA 6.6 or PA6.6. Knowing how the name depends on the molecular structure of the components, it becomes clear that it should never be spoken PA sixty-six, but always PA six six.

Polymerization of ε-caprolactam to polyamide 6

The two technically most frequently used polyamides are PA 6.6 and PA 6. Their manufacturing process is fundamentally different:

PA 6.6 and PA 6 are chemically very similar, as they only differ in the mirrored arrangement of a –CH 2 –NH – CO group. They have similar physical properties.

The modulus of elasticity and degree of crystallization of PA 6.6 are higher than those of PA 6, which is due to the point symmetry of the macromolecule of PA 6.6, which increases the frequency of hydrogen bonds already in the melt as a short-range order and solidifies as a long-range order during crystallization. In the case of the non-symmetrical macromolecule of PA 6, the distances for the formation of hydrogen bonds are only suitable if the neighboring macromolecules are arranged in opposite directions, which is statistically less often the case.

Well-known synthetic representatives of the polyamides are commercially available under the names nylon (PA 6.6), Cordura , Kevlar and Perlon (PA 6). In the GDR , the latter plastic was known as Dederon . From a chemical point of view, proteins also belong to the polyamides, even if this name is not common.

Perlon, nylon and Dederon are trademarks for chemically related synthetic fiber products. Perlon (PA 6) (also: nylon 6 ) is produced by polymerizing caprolactam . It is very similar to nylon (PA 6.6) made from adipic acid , but it absorbs dyes more easily and has a lower melting point .

Toothbrush bristles made of nylon

Nylon (chemical name: polyhexamethylene adipamide) was developed by Wallace Hume Carothers and Julian Werner Hill at EI du Pont de Nemours and Company in Wilmington ( Delaware , United States ) on February 28, 1935 , and was patented almost two years later on February 16, 1937 . It was the first fiber to be produced entirely synthetically.

Nylon was first used for toothbrushes , not nylon stockings . Dupont sold the first five million pairs of nylon stockings on May 15, 1940 (N-Day) in selected stores in major US cities. 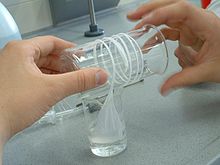 Manufacture of a nylon 6.6 thread in the laboratory

The name nylon was coined by DuPont for fibers made of polyamide 6.6 with the aim of establishing it as a synonym for stockings . For corporate policy reasons, it was not protected as a trademark . Later it was used as a generic name for linear aliphatic polyamides, especially in the Anglo-Saxon language area . Contrary to popular belief, the name nylon does not come from NY ( New York ) and Lon ( London ), the first places where nylon was produced. In 1940, John W. Eckelberry (DuPont) said nyl was a random syllable and on was a common ending for fibers (like Cotton ). DuPont later stated the name was originally intended to be No-Run (an allusion to no ladder ), but was changed over false allegations out of fear of legal battles. The renaming from Norun to Nylon went through several intermediate steps, including Nuron and Niron .

In addition, there is also a rumor that explains the name nylon, the inventor of the material, Wallace Carothers, triumphed over the success of the fiber with the exclamation Now You Lousy Old Nipponese (or Now You Look Old Nippon ) - in Schadenfreude, at last himself to have developed a fiber to compete with Japanese natural silk . The name nylon however, the fiber was only after Carothers' death, so this is probably a legend, probably during the Second World War was, as it just at this time for the Allies was particularly important, a silk substitute in the production of parachutes available to have.

Nyltest was a trademark of the NYLTEST easy dress for knitted fabrics made from the polyamide fiber nylon for blouses and shirts.

Perlon is the trademark of a plastic fiber developed in 1938 by Paul Schlack for I. G.-Farbenindustrie AG in Berlin . It consisted of polyamide 6 and, as a German alternative to nylon (polyamide 6.6), was quickly declared an essential material for warfare. The name was derived from the original code name perlurane of the secret project to develop an alternative to nylon. During the Second World War, perlon was used to make parachutes, bristles to clean small arms and in aircraft tires. It was marketed under the name Perlon L from 1939 . It was not until 1943 that the civilian use of women's stockings began . Perlon is obtained from the monomer ε- caprolactam .

Stamp block 1963 of the GDR, printed on DEDERON

Dederon (mostly DEDERON as a brand ) was the trade name for polyamide fibers in the GDR from 1959 . Dederon fibers were manufactured in the VEB Chemiefaserkombinat Wilhelm Pieck in Rudolstadt-Schwarza , in the VEB Chemiefaserwerk Herbert Warnke in Wilhelm-Pieck-Stadt Guben and in the VEB Chemiefaserwerk (until 1960 VEB Kunstseidenwerk) Friedrich Engels Premnitz . Dederon is a made-up word based on the Perlon model, made up of GDR and on. Dederon achieved particular fame through the famous smock aprons and shopping bags; Also on March 12, 1963, a block of stamps Chemistry for Peace and Socialism made of Dederon foil was issued.

Most of the non-fibrous polyamides are sold as plastic granules and are processed using injection molding .

Many technically important polyamides are semi-crystalline thermoplastic polymers and are characterized by high strength , rigidity and toughness , and have good chemical resistance and processability. Many of the properties of the polyamides are largely dominated by the amide groups that interact with one another via hydrogen bonds .

Exact values ​​for the properties of the polyamides depend, among other things, on their crystalline structure and in particular on their water content . Polyamides react to the moisture content of the environment with reversible water absorption or release. The water is stored in the amorphous areas of the polyamide. The water uptake depends very much on the concentration of the amide groups. In the ambient air, PA 6 absorbs approx. 2.5–3.5% water, while PA 12 only absorbs approx. 0.2–0.5%. Polyolefin- based additives have been developed to ensure high impact strength even when dry.

Here are some key properties:

Compact polyamides have high wear resistance and good sliding properties . The mechanical properties can be further improved by fiber composites with glass or carbon fibers , so that strength and impact strength can be matched to the application. However, the addition of fibers increases the sensitivity of the materials to hydrolysis, as a microscopic gap remains between the matrix and the fiber through which moisture is drawn in by the capillary effect. However, this effect turns out differently depending on the size of the glass fiber and the associated connection between fiber and matrix.

Fibers come either as a spun-dyed material or as an off-white fiber material. The raw white fiber material can be colored in various stages of presentation (flake, yarn, piece). Acid or metal complex dyes are used. Polyamide can also be colored with disperse and direct dyes, but the fastness properties achieved are generally significantly poorer.

More recently, reactive dyes have also been used, which clearly exceed the fastness properties of acid, disperse and direct dyes.

Most of the polyamide production is used as synthetic fibers for textiles . Examples are …

Due to its resistance to lubricants and fuels at temperatures of over 150 ° C, it is also used in vehicle construction for engine components such as intake systems, fuel lines, engine covers, oil pans and for compressed air systems such as chassis and brakes. When used as solid material tires for industrial trucks , polyamide with a Shore A hardness of over 75 exceeds the load-bearing capacity of other plastics such as polyurethane or Vulkollan and other elastomers .

PA12 is used as an inexpensive standard material for 3D printing of components and housings. The powder wetted with water is baked with a laser beam.

Due to their uniformly smooth surface, polyamides are well suited as sutures in surgery . The polyamide sutures are particularly characterized by their excellent knotting properties and high tensile strength . It is a monofilament, non-absorbable surgical material made of polyamide 6 and polyamide 6.6.

The following table provides an overview of polyamides that can be technically partially and completely bio-based (e.g. from castor oil ). It should be noted that the bio-based variants do not necessarily have to be on the market and may be significantly more expensive than conventional competing products. In addition, conventional monomers for products can only be partially replaced by bio-based ones, which means that the actual biogenic proportion can be lower than the value in the table. The monomers that can be produced bio-based are marked in green . The maximum biogenic proportion is calculated from the proportions of the molar masses of the monomers.

The recycling code for polyamides is 07.