The title of this article is ambiguous. Further meanings are listed under rope (disambiguation) . 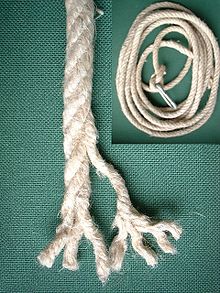 A rope is an elongated, slack, flexible, tensile, rather torsionally soft elastic element made of twisted ("beaten") or braided natural or synthetic fibers or wires . It is mostly used to transmit tensile forces , but also for a variety of other purposes. The ropes, which consist of several cords with a smaller cross-section, combine tensile strength and flexibility of curvature.

The characteristic rope motif has also been imitated as an architectural and decorative ornament ( rope rod ) since ancient times , but especially in the early modern era .

first representation of a rope factory in Egypt

Historical representation of a rope maker from the 16th century.

Rope bench in the Maritime Museum in Spitz an der Donau

Ropes and fishing nets made from willow bast have been proven as early as the Mesolithic . It is controversial whether ropes were already available for transporting stones and erecting megalithic structures ( menhirs , dolmens ). A around 1500 BC A rope made of linden bast with a diameter of four cm was discovered in a salt mine in Hallstatt . The first images of rope makers come from ancient Egypt.

With the increasing importance of seafaring, rope was increasingly required and manufactured in larger quantities in the late Middle Ages and the Renaissance - the professional profile of the rope maker emerged .

The manufacture of industrially manufactured ropes began in the 19th century; In addition to hemp , other materials (e.g. sisal fibers , later wire - mainly made of steel wire - and synthetic fibers ) were increasingly used.

Ropes, cords and cords are very versatile. These were needed in seafaring, surveying, construction and transport, in animal trapping, when ringing bells, etc. In the Middle Ages they were beyond as well rope , rope ladder , arithmetic rope or treadwheels widespread. Ropes also formed essential components of the first more complex machines such as catapults , cranes , freight elevators , pulley blocks , etc.

Modern areas of application of ropes are climbing , tug-of-war , locking and towing and much more. Sometimes they replace a handrail on stairs.

The term “rope” is used for ropes made of natural and synthetic fibers as well as for wire ropes . Ropes are colloquially referred to as "rope" or , if the diameter is small, as " cord " or, if short and thin, as " cord ". Thread , yarn and twine are not counted among the ropes and are diverse means of production that do not have a multi-stage twist.

In the maritime context one never speaks of ropes (with the exception of the bell rope ). The generic terms are called cordage or running and standing rigging , leash, for which there are a large number of precise names depending on the design or use. Very thin lines are called "laces".

A distinction must be made between ropes that stretch and ropes that do not stretch . A rope known as stretching stretches under load. This is an advantage if, for example, a climber is caught. Low-stretch ropes, such as those used in a halyard (rope) on a boat, keep the structure stable and expand very little under load. The stretching depends on the material chosen and the type of rope braiding. The stretching is given as a percentage of the elongation at nominal load.

In climbing too, ropes are differentiated according to various criteria .

Physics differentiates between “ideal” and “real” ropes. The ideal rope - a model  - is massless, taut, non-stretchable and without bending stiffness. It simplifies the treatment of (frictionless idealized) pulley blocks . However, for the sag in the form of a chain line or the wave movements of the hanging or tensioned rope, it (only) has to have mass (for the mechanics of ropes, see rope statics ).

Steel rope with Z-lay and opposite strands

The earlier z. B. ropes used in sailing and mountaineering were mostly made of hemp; today mainly synthetic materials are used. With a lower weight and diameter, they are more stable, more abrasion-resistant and easier to knot. In addition, depending on the impregnation, they hardly absorb water and therefore do not freeze so easily. However, synthetic ropes age faster due to the UV radiation of sunlight, so that their durability and strength decrease over time.

Ropes, in Low German Reepe , used to be turned by hand by the Reepschläger on cable cars , also called Reeperbahnen . Nowadays the production is done mechanically using rope laying machines . They bear this name because one twisting also propose names to it from lichens to distinguish. Historically, the twisting of the individual rope strands was done with a warbel.

Several threads or wires spun from fibers are first twisted into strands . The rope is then laid from several strands. A thin rope consists of 3 to 4 such strands, which are twisted. 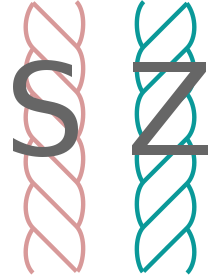 a) Lang lay b) Ordinary lay

Lang lay ropes are ropes in which the twisting of the individual strands and their twisting with one another take place in the same direction of rotation. As a result, the strands can be moved relative to one another. This makes the rope supple and therefore flexible. When bending a rope, one side should actually be stretched and the other side compressed , but the twisting enables the compression to compensate for the expansion by moving the strands, the same strand that would be "compressed" is simultaneously "stretched" elsewhere . Lang lay ropes are used, for example, for pull ropes and hoisting ropes for cable cars.

Thicker ropes (hawsers) in turn consist of several thinner ropes that are twisted together and are called cardeles in this function . The direction of lay of the cardeles and the entire rope are opposite to each other, which prevents the rope from untwisting.

The connection of rope ends is done by splicing , in which the rope ends are intertwined. The rope ends of a natural fiber rope are protected from being undone by a whipping , with synthetic fiber ropes the rope ends are often fused or wrapped with a simple adhesive tape. There are various accessories for wire ropes. A large number of knots are used to fasten ropes or to connect them to one another .

Identification of the ropes

There are colored fibers (one or two) in the core along the entire length of a rope. The year of manufacture can be determined from the color of the fiber. The color combinations are repeated after 11 years and can vary between manufacturers.

Example of a climbing rope manufacturer:

In the case of braided climbing ropes, a woven marking can be made in the middle of the rope using the Duodess process. Markings with (possibly damaging) felt markers or slipping adhesive tapes are no longer necessary in order to be able to assess the remaining amount of rope.

As with the Duodess process, with the Triodess process there is a woven marking (pattern change) on the last five to seven meters. This “rope danger zone” shows that it is high time to look for a suitable stand. 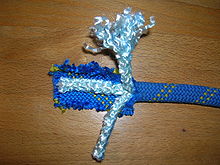 Climbing ropes (according to EN 892) should safely absorb enormously high forces in the event of a fall without causing an effect that is dangerous for people due to excessive braking acceleration, both when securing the rope when climbing and when roping up to the rope team . They are made of an elastic material around a core. Due to the conversion of forces in the rope (see helix ), the energy is temporarily stored in the elastic core, and the speed of expansion of the rope in length slowly decreases ( dynamic force distribution, low accelerations). The rope becomes longer, but significantly thinner. After it has come to a standstill, it transfers itself back to the rope and the load oscillates vertically. An extreme application of this principle is bungee jumping .

Static ropes generally refer to ropes and accessory cords with low elasticity ( EN 1891). They are for the personal security working at height, for rope access, for rescuing people, for caving suitable and other similar activities. During these activities it is important that the rope has the lowest possible elasticity and maximum strength when pulled.

In addition to twisted ropes, braided ropes are also produced, which are usually more elastic and do not untwist, but have a larger surface. They can be made hollow in cross-section as well as without a recognizable, tunnel-shaped structure possibly resulting from braiding. If this is the case, however, an inner fiber or strand called a core can be braided around for additional stability (tear and tensile strength) . To do this, one usually takes a different material and creates a form of composite material that combines the properties of both materials. The braiding techniques used in this process can also be found in other handcrafted goods, such as baskets or whips.

Wire ropes , which today are usually made of steel , are used in different diameters and types for a wide variety of purposes, the thinnest for the parallel guidance of sensor strips in scanners, thin and flexible for the circuit cable on the bicycle , stronger as a Bowden cable for the brakes (also in Car for handbrake and clutch), for tensioning and suspending lights and pictures via cables for elevators , winches , excavators , cranes and cable cars to cables for stay cable and suspension bridges . In civil engineering , ropes are also being used more and more frequently for roof constructions based on the model of the tent roofs in Munich's Olympic Park . Numerous types of wire ropes with different properties are produced according to different uses, e.g. B. those with a steel or a hemp core or today a plastic core with or without an integrated optical fiber . In the case of submarine cables , steel cables also serve as protective sheathing under water. Textile threads that are soaked with oil are often worked into steel ropes . Due to the constant release of the oil when the rope is moved, the rope is lubricated to a certain extent and it becomes more flexible. It also prevents rust in the rope. Wires for steel ropes have a tensile strength of around 2000 N / mm².

Wire ropes made of aluminum (often in connection with a steel core), copper (also as braided tape) and bronze serve as flexible electrical conductors. Only slightly twisted bundles of copper strands, which are essentially held together by the sheathing with a flexible plastic insulator (formerly PVC, now PE), are only referred to as cables .

For many ropes, it is best to wind them on a rope drum for longer storage; dry and not too warm rooms are generally preferable, but some materials need a certain amount of moisture . Furthermore, plastic ropes in particular should not be exposed to sunlight during storage, as the UV radiation then quickly ages them and reduces their tear resistance. When washing climbing ropes , you use cold water and then let them dry slowly in the air - never in the blazing sun. Polyester ropes must not be washed with soap because they are sensitive to alkalis.

In rather rare cases, ropes are also used in coats of arms (see also love rope ).

Coat of arms of the French commune of Montouliers