Climbing ropes or mountaineering ropes are ropes that when climbing the fuse and in alpine climbing also of locomotion used (for example, when abseiling or Jümarn ).

Climbing ropes are used in climbing as well as by mountain rescue services and height rescue as well as by the fire brigade in the area of fall protection. 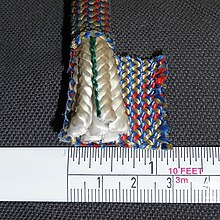 Until the 1960s, climbers relied on ropes made from hemp fibers . Rope breaks were not uncommon and led to numerous fatal accidents. Artificial silk ropes , which almost met the rope standards of today's mountain ropes, were very expensive and were not widely used.

Modern climbing ropes are made of polyamide and usually have a core sheath construction: A core made of interwoven fibers is surrounded by a sheath that protects it from damage. The core bears the main load (exception: tree climbing ropes).

Climbing ropes are after their use strain differed in dynamic ropes (elongation of 8 percent) and semi-static ropes (strain 2-5 percent). The dynamic elongation properties are created by the twisting of the core threads as well as the shrinking of the polyamide fibers by means of a combination of heat, time and pressure in the autoclave .

The minimum strength values ​​of the climbing ropes available in Germany today are standardized according to the UIAA . In addition, climbing ropes as part of personal protective equipment must meet certain European standards and bear the CE mark in order to be sold. According to the rope standards, a distinction is made between single ropes, half ropes and twin ropes.

Due to their elasticity, dynamic ropes ( EN 892) can absorb fall energy and thus reduce the impact force acting on the climber to a level that is tolerable for the human body. They are used in sport climbing and alpine climbing. There are three types of dynamic ropes:

Single ropes with a diameter between 8.9 and 11 mm are used in the climbing hall and climbing garden . According to the European standard EN 892, such a rope must meet the following requirements:

Twin ropes (⌀ 7–8 mm) are only used in double strands. They are used when climbing long routes with good intermediate belay points and then rappelling over them again . To do this, you use two thin twin ropes in parallel, just as you would use a single rope, i.e. This means that both rope strands are always hooked into the same intermediate securing device. A single twin rope cannot withstand the maximum load that a single rope could withstand, so it must never be used alone. In alpine climbing, half or twin ropes are usually used. In recent alpine literature, there is often no clear distinction between the last two types of rope, as modern ropes are often approved as twin ropes as well as half ropes. Their main advantages lie in the possibility of abseiling over the full rope length and in the greater safety reserve through redundancy. In alpine history there has never been a rope accident in which both strands would have broken due to excessive stress. However, there have already been accidents because the ropes ran over sharp stone edges and were cut as if with a knife.

In standard fall tests, twin ropes are tested in double strands with a weight of 80 kg. You have to endure twelve such standard falls.

Half ropes (⌀ 8–9 mm), also known as double ropes, can be used to secure two second climbers at the same time, one strand being used per second climber. Securing with just one line is only permitted in the subsequent ascent. The lead climber must always use both strands (two half ropes) due to the possible higher forces. He alternately hooks the strands separately into the intermediate fuses. This leads to reduced rope friction. Half rope strands are slightly heavier than twin rope strands. In the standard fall test, half ropes with a 55 kg drop weight are tested on a single strand and must withstand five standard falls. Only half the rope length is available for abseiling; For the full length of the rope, two half ropes are required, which are knotted.

The term "double rope" is of historical origin, as in the past the double rope technique was actually practiced with two single ropes.

Static ropes ( EN  1891, ⌀ 8.5–16 mm, also: Speleo ropes ) have a lower elongation of maximum five percent compared to dynamic ropes. This is why these ropes are also often called semi-static , because the term static rope incorrectly suggests that these ropes have no elongation in use.

The lower elongation compared to dynamic ropes improves their handling as a fixed rope . They are therefore used in canyoning or caving , mountain rescue , height rescue , fall protection and the construction of mobile high ropes courses.

However, you can not to secure the climbing in the lead climbing are used, since in a possible fall with a fall factor so high> 1 impact force could occur that serious injuries and material failure is the result.

The structure and appearance are similar to that of a dynamic climbing rope. Static ropes are usually made of polyamide fibers and have a kernmantle construction.

An exception in terms of construction are the climbing ropes for tree climbing , as they are mainly used in rope-assisted tree care. These ropes have a higher proportion of sheath, which carries the main load. They are therefore also referred to as sheath core ropes.

The most important parameter of a climbing rope, the rope elongation , which assigns him a particular cable type. High fall elongation means a low impact force and thus gentler falls. Too much stretch, however, increases the risk of ground contact. The elongation in use indicates the elongation under normal static load. A high value here makes handling the rope difficult.

Length is also decisive for the price. Ropes are sold by the meter or in pre-assembled lengths of 30 to 70 meters.

Knotability is another feature. For this purpose, the node width of a node is measured, which is used to determine the rigidity of the rope. The cladding displacement parameter indicates how much the cladding can shift relative to the core. Values ​​that are too high for both parameters also make handling more difficult.

Impregnation is one of the most important developments. It protects the rope by preventing water and dirt from entering. Wet ropes are heavier and more demanding to use. In addition, the dynamic performance of the rope is significantly reduced. This is especially a problem when ice climbing or in winter. Dirt that gets under the coat attacks the core directly. This increases the load on the rope and it has to be replaced sooner.

The tensile strength of climbing ropes is measured based on the number of standard falls . This size indicates how many falls a new rope of this brand can withstand in the test. A standard fall refers to a fall in the standardized test and almost never occurs in practice. The higher this value, the more safety reserves the rope has. One with 10 or more standard falls is called a multi-fall rope.

In June 2002 the UIAA passed a standard for testing sharp edge strength. This value should reflect the edge workability and indicates whether the rope can withstand a sharp edge fall over a certain edge radius. A rope can call itself "sharp-edged resistant" if it can withstand at least one fall over a right-angled edge with an edge radius of 0.75 millimeters. However, the test is not very meaningful. On the one hand, the defined edge cannot be produced identically enough for different testing institutes to come to the same results. On the other hand, the test arrangement does not provide any qualitative statements about how sharp-edge-resistant a tested rope is. In addition, the test is hardly relevant in practice, as the rope runs straight over the edge during the test and is thus subjected to shearing loads. In reality, situations occur more often in which the rope is loaded transversely and breaks due to a cut-like movement with much lower force. For these reasons the test standard was suspended in 2005.

Center markings serve as an overview. They allow the lead climber to be informed when he has reached half the pitch. They make abseiling easier, especially with single ropes. The simplest form is printed or woven lines in the middle of the rope. Ultimately, owners can mark a rope with special pens afterwards. There has been some debate about whether certain chemicals in common pens will attack the rope.

Duodess is a more complex form of marking . The rope halves each have different sheath patterns. This creates a permanent marking of the middle of the rope.

At Triodess , the critical area 7 to 9 meters before the end of the rope is also delimited by a different sheath pattern. This marker shows when it is time to look for a convenient place for a stand while abseiling.

The greatest dangers of a rope break are melt burns and sharp edge falls. At high frictional temperatures, polyamide can melt and tear the rope. These can occur when rope rubs against rope in one place. Frequent mistakes are inserting two ropes into a deflector or mixing half rope and twin rope technology. Redirecting a rope over a loop while abseiling were real sources of accidents.

If handled correctly, only sharp edge falls are sources of danger that cannot be excluded. These can occur over a sharp edge if the rope is poorly guided. In addition to the tensile load (see also cable pull ), the shear load then comes over the edge, which can even cut through a new rope.

There are also factors, such as UV radiation, that cause the rope to age faster. Dirt and dust can penetrate the rope and its sharp edges can attack individual fibers.

In order to keep rope aging as low as possible, the rope should be in a dark, cool and dry place. For hanging storage, the rope can be taken up to a rope doll and the entire head can be hung up. If the hook is too small, a sling or accessory cord can serve as an aid so that the rope does not hang on a single rope loop.

Polyamide is extremely sensitive to chemicals (such as lubricants) or acids (including acid fumes from car batteries). Damage can occur that cannot be seen with the naked eye and that significantly reduces the tear resistance.

A rope should be replaced after extreme situations:

Even with proper use, manufacturers recommend a maximum service life:

These values ​​are based on manufacturer recommendations without evaluating empirical data. In a test, Alpin showed that unused ropes have a much longer life expectancy. In his master's thesis, Walter Siebert found no relation between age and firmness.

Rope tears have been extremely rare in climbing since the introduction of the kernmantle rope. From 1975 to 2005 there were 20 known rope breaks in Austria and Germany, around half of which were due to incorrect use or due to ropes coming into contact with polyamide-aggressive substances during storage. From 1983 to 2012 the DAV was aware of 17 rope cracks, almost all of them in alpine terrain. The most frequent causes were sharp edge falls, i. H. Falls in which the rope runs over sharp (rock) edges or ridges.