Bergretter is a redirect to this article. For the family television series from ZDF and ORF, see Die Bergretter .

Rescue helicopter in the Alps 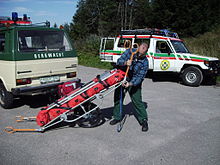 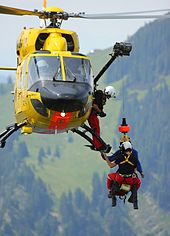 Mountain rescue in the Alps from the air. If a landing is not possible, a winch is used.

Besides the purely medical emergency, he also has the task of using special equipment, vehicles to rescue people from acute mountain emergencies and training of the forces or to conceal . Since it is often not possible in the mountains to alert the mountain rescue service via an emergency call , there is an alpine emergency signal .

Transporting a patient away (exercise)

In Germany 10% of the mountain rescuers are female, in Austria 1.9%.

Starting in the Middle Ages, many pilgrims were rescued from mountain distress or other emergency situations from hospices on Alpine passes (including the Grosser St. Bernhard and Arlberg ).

The International Commission for Alpine Rescue (ICAR), based in Switzerland, is a working group of national mountain rescue organizations.

The ICAR is divided into the four technical commissions: