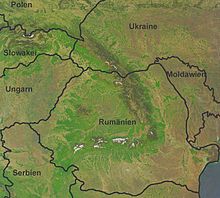 The Carpathian Mountains in the satellite image.

Bâlea, a glacial lake in the Făgăraș Mountains in Romania, at an altitude of over 2000 m

The Apuseni Mountains are best known for their caves

The Carpathians (formerly: Karpathen ; Czech , Polish and Slovak Karpaty, Ukrainian Карпати Karpaty , Romanian Carpați , Hungarian Kárpátok , Serbian Карпати Karpati ) are high mountains in Central Europe , Eastern Europe and Southeastern Europe . They form an arch over 1300 km long, 100–350 km wide, open to the west, which - including its foothills - begins in the northern enclosure of the Vienna Basin and ends at the river valleys of Morava , Nišava and Timok in eastern central Serbia . The Carpathians form the northernmost foothills of the Alpid mountain belt . As part of this belt of folds, they continue to the west in the Alps and to the southeast in the Balkan and Rhodope Mountains , while the Dinarides and Apennines are offset to the southwest and run roughly parallel to the Eastern Carpathians.

A total of 8 states have a share in the Carpathian Mountains. The largest shares are in Slovakia and Romania .

The Carpathian form is used in Greek ( ó Karpátes oros [as in Ptolemy , 2nd century AD], tó Karpafon oros ), Roman (Carpates montes, Carpatae) and Middle Latin texts (Carpati montes, Alpes Bastarnicae [Tabula Peutingeriana]) mentioned. It corresponds to the name for the people of the Carps in the 2nd century AD, who settled east of the Romanian Eastern Carpathians. In Roman times , the Carpathian Mountains were also called Montes Sarmatici after the Sarmatians . In documents of the Kingdom of Hungary from the 13th and 14th centuries, the mountains were referred to as Thorchal, Tarczal or Montes Nivium .

The Carpathian Arc encloses the Hungarian Plain from north and east and delimits it to north-central and eastern Europe . Poland , Slovakia , Ukraine and Romania have a share in the Carpathian Mountains, as well as in small parts or via the foothills Austria , the Czech Republic , Hungary and Serbia .

The Carpathian mountain arch is more curved than the Alpine arch . Geologically, both mountain arches are a result of plate tectonic processes over the past 100 million years. The pressure of the African plate, directed northwards against the European part of the Eurasian plate , caused the fold mountains in the southern half of Europe to bulge, especially in the last 30 million years (cf. Alpidian orogeny ). The curvature between the Eastern and Southern Carpathians is particularly strong , with the Apuseni Mountains surrounding almost all of Transylvania (Transylvania) and continuing across the Danube ( Iron Gate ) in the Bulgarian Balkan Mountains .

The Carpathian Arch is in sections part of the European main watershed and extends over an area of ​​around 220,000 km². It has an average width of 150 km and is more than 1300 km long along its curvature. It is made up of rocks as diverse as the Alps. The once existing connection between the Eastern Alps and the Western Carpathians sank a few kilometers into the depths of the Vienna Basin , similar to parts of the Pannonian Basin .

The Carpathian Mountains have a great variety of landscapes. Morphologically , they include several high mountain regions with heights of more than 2000 m (High and Low Tatras, Eastern and Southern Carpathians), as well as numerous areas with low mountain character (Small and White Carpathians, Slovak Ore Mountains, Western and Eastern Beskids, Transylvanian Basin). The Western Carpathians have some large longitudinal valleys as well as transverse and breakthrough valleys (see e.g. Waag , Hron ). The highest peaks are in the north (High Tatras, Gerlachspitze , 2655 m) and in the southeast ( Moldoveanu , 2544 m).

The Carpathian Mountains are divided into different parts. Two principles are common here: on the one hand horizontal, on the other hand vertical.

This is based on geological-tectonic, physiographic and rough morphographic criteria:

Most important Carpathian rivers with the respective countries of their source

The lower elevations of the Carpathian Mountains are forested. The tree line varies between 1150  m and 1900  m . The vegetation and fauna are essentially similar to the Alps, but are rich in endemic species that are only found in certain Carpathian regions.

The Carpathian Mountains cover the largest still existing, closed deciduous forest area in Europe. More than a third of all large carnivores still living in the wild in Central Europe -  brown bears , wolves and lynxes  - are at home here. In the upper reaches of the Argeș and in its tributaries, the extremely rare bullhead is (or was) endemic .

The Southeast Carpathians can be divided quite clearly into four levels of vegetation :

In the western and eastern areas of the Carpathians, in some cases , no permafrost soil developed during the last glacial period , so a wooded refuge for many animal and plant species native to Europe today has been preserved at an altitude of 300 or 600  m . The preservation of many subspecies played an important role in the repopulation of Europe at the beginning of the Holocene and its biodiversity , alongside the other two large refuges on the Iberian Peninsula and in Italy .

In contrast to the Alps - with the exception of the Tatras and the Prahova region - the Carpathian Mountains are not yet very much shaped by tourism . Various regions (including Poiana Brașov , Predeal ) are developing into tourist centers for foreign guests as well.

In 2003, seven Carpathian countries joined forces and passed the Carpathian Convention , under which measures to protect the landscape and nature of the mountains are coordinated.

On May 24, 2010, the “Day of National Parks in the Carpathian Mountains” was celebrated in five countries with the participation of around 30 national parks and protected areas, in order to make the area better known on the one hand, and to emphasize the need for protection on the other.

The Carpathian Arch has a special meaning for the German-speaking area. German and Austrian settlers have lived in its north (Slovakia, Poland) and especially in the east and south (Transylvania, Banat, Hungary) for 800 years. Even if their number has decreased significantly since 1918 and the fall of 1989, they contribute significantly to the cultural diversity of the states concerned. The ethnic and linguistic diversity includes a few dozen language groups (including Czech, Slovak, old German dialects, Polish, Volhyn, Ukrainian, Hungarian, Romanian, Serbo-Croatian, Bulgarian). “Official” Romania alone knows 13 nationalities - experts even speak of 19. After some oppression during the communist era, which affected Jews and Gypsies as well as Germans, individual local autonomies were achieved (Poland, Slovakia, Hungary, partly Romania). There is a significant influence of German culture in Upper Silesia and Moravia , in the Banat , in Transylvania and the Sathmar region . This diversity and the previous and future EU enlargements trigger numerous economic activities and investments by Austria, Germany and other economically stronger countries that promote European integration. Among other things, Sibiu (Hermannstadt) attracted the attention of the "old" EU countries in 2007 as the European Capital of Culture .