This article deals with the city. For further meanings see Poprad (disambiguation) .

Poprad ( pronunciation ? / I ; German German village , Hungarian Poprád ) is a town at the foot of the High Tatras . The population is 52,037 (2015), making Poprad the tenth largest city in Slovakia . 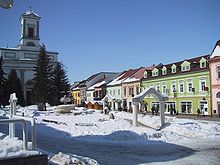 Poprad is located in the Podtatranská kotlina (Lower Tatras Basin) at the southeastern foot of the High Tatras on the Poprad (Popper) river flowing from west to northeast in the historical Spiš region (today administratively in the Prešovský kraj ). In addition to the High Tatras, the Leutschauer Mountains in the east, Kozie chrbty in the south and the Low Tatras in the southwest are in the immediate vicinity . The main watershed between the Black Sea and the Baltic Sea is about 15 km to the west in the village of Štrba . The city of Košice is 110 km away by road, while the capital Bratislava is 330 km to the southwest. The city covers an area of ​​63.039 km² and the city center is about 670  m nm

A chemical factory, the Tatravagónka wagon factory and the international household appliance manufacturer Whirlpool are located in and around Poprad . There is also the Pilsberg brewery, as well as a company that covers the majority of Slovakian tea production, and the German company Stiebel Eltron, which produces hot water boilers there.

View of the High Tatras from Poprad

Worth seeing are a restored pedestrian zone with a Protestant church, the old towns of the formerly separate communities Veľká and Spišská Sobota and above all the panorama that the High Tatras offers just behind the town.

In Poprad there is the “AquaCity Poprad” water park, which is supplied from freely available natural energy sources and consists of hotels, a swimming pool complex, a restaurant and a fitness and conference center.

The settlements of today's Poprad were first mentioned in writing in 1256, when they still had their Slavic names, namely Poprad (for Poprad), Forum Sabbathe (for Spišská Sobota) and Vylka (for Veľká). However, the following written sources already use their German names, for example Villa Theutonicalis (for Poprad) and Sanctus Georgius (for Spišská Sobota) in 1268 . After the Mongol invasion of 1242, Spišská Sobota, like Poprad and Veľká, was repopulated by German settlers, making them largely German settlements. Stráže was originally a border guard settlement and was probably re-established by German settlers as early as the 13th century. All five settlements belonged to the 13 cities pledged to Poland, to the brotherhood of 24 royal pastors, to the union of 24 Spiš cities and to the so-called province of 16 Spis cities (see under Spiš ). While Poprad, Veľká and Stráže were more of an agricultural and craft towns in the Middle Ages, Spišská Sobota was clearly a market settlement with numerous craftsmen.

The oldest of the united settlements is Spišská Sobota, which was already a market center in the area towards the end of the 12th century, when it was still a Slovak settlement. It was also the first of the settlements to receive city rights (Poprad, Veľká and Stráže were only mentioned as towns at the beginning of the 15th century). This town, one of the most important places in Spiš in terms of art history, lost its supremacy over its previously insignificant sister Poprad in the second half of the 19th century when the Kaschau-Oderberger Railway was completed in 1871. The interesting inner city is now a monument zone.

Poprad was a rather insignificant place until the 18th century; Only in the course of tourist development and the beginning of industrialization did this change. The place owes its tourism to its location at the foot of the High Tatras. In addition, since the 18th century - starting from Bad Schmecks ( Starý Smokovec ), which Goethe also visited - there was increasing balneological development of the region. From the 16th to the 18th century, Poprad was even a mining town; copper was mined. However, the deposits were not very productive and did not lead to sustainable progress.

The construction of the Kaschau-Oderberger Bahn, however, brought Poprad noticeable advantages. As an important place in terms of transport in what was then Upper Hungary, the population of German origin, some of which had already been called into the country under King Sigismund in the 13th century, also came from Hungary, which allowed trade and industry to grow further. Railway workshops were set up at the end of the 19th century, and the Tatra Electric Railway started operating in 1908 . It was built as a replacement for the trackless railway Poprád – Ótátrafüred , which was only operated from 1904 to 1906 , and opened up the Tatras further for mountain lovers and those in need of a cure.

After the First World War , the city became a garrison of the Czechoslovak and later Slovak armed forces, for which two barracks complexes were built in the northeast and southwest of the city. An artificial silk industry settled in neighboring Svit . The railway workshops were converted into a wagon factory.

After 1941 there was also a small concentration camp for the Jewish population. The first deportations to neighboring Hungary also took place from here .

In the last days of August 1944 Poprad, like large parts of the Spiš, was occupied by armed forces that had joined the uprising called the Slovak National Uprising . At the beginning of September, however, these units had to withdraw again. In early February 1945 Poprad was occupied by Soviet troops.

The end of the Second World War was accompanied by the extensive expulsion of the German and Hungarian sections of the population. In the spring of 1946, an "emigrant camp" was set up in Poprad for this purpose. Until autumn 1946, the remaining or returned German and Hungarian residents were sent from there to Hungary, Austria and Germany. The associated loss of residents mainly active in trade, commerce and tourism only brought about a temporary break. A vigorous industrialization and a slowly reviving tourism helped to compensate for it.

Newly built Greek Catholic Church in the south of Poprad

Until the 19th century, the 5 cities that make up today's Poprad (Deutschendorf, Georgenberg, Felka, Matzdorf, Michelsdorf) had clear German-speaking populations. Among other things, due to the emigration of the Spiš Germans to areas further east at the beginning of the 19th century, as well as the immigration of Hungarians and Slovaks and the policy of Magyarization , their share in the population decreased significantly at the turn of the century.

The city consists of the following six districts:

The HK Poprad was founded in 1929 and plays since 1993 in the highest Hockey -Spielklasse Slovakia, Extraliga . HC Lev Poprad , founded in 2010, took part in the Continental Hockey League in the 2011/12 season. The teams play in the Poprad ice rink . HC Lev was relocated to the Czech capital in spring 2012, where it played two more seasons in the KHL as HC Lev Prague .

Poprad is a traffic junction of important roads and railway lines. The double-track main line from Žilina to Košice runs through the town , and the branch line to Plaveč starts here. Two state roads cross in the city: the I / 18 ( E 50 ) connects the city with Prešov in the east and Žilina in the west and on to Bratislava. The I / 67 runs from the Hungarian border at Tornaľa to the Polish border at Ždiar . Part of the D1 motorway , which is a bypass here, has recently been built. The international airport Poprad-Tatry ( IATA code : TAT) is at 718  m nm the highest international airport in Europe.

Poprad is the starting point of the well-known narrow-gauge Electric Tatrabahn to Starý Smokovec ( Altschmecks ) and Štrbské Pleso ( Tschirmer See ) as well as to Tatranská Lomnica ( Tatralomnitz ). Thanks to its bus connections, Poprad is the central starting point for trips to the High Tatras and the Slovak Paradise (Slovenský raj) . The Low Tatras and the Spišská Magura are also easily accessible.