The right-handed underwent training at the Tennis Academy of Nick Bollettieri in Bradenton, Florida . Her career highlights in singles were her two tournament wins in Indian Wells in 2002 and 2007. With her doubles partner Ai Sugiyama , she reached the finals of the Australian Open twice ( 2002 , 2009 ) and the French Open in 2006 . In mixed she won all four Grand Slam tournaments with four different partners : 2001 in Wimbledon with Leoš Friedl , 2002 in Melbourne with Kevin Ullyett , 2005 in Paris with Fabrice Santoro and 2005 in New York with Mahesh Bhupathi . In 2002 she also won the Fed Cup with the Slovak team , in the final against Spain she secured both points in the singles (against Magüi Serna and Conchita Martínez ) and thus made the decisive contribution to the 3-1 away win. In 2005 she also won the Hopman Cup together with Dominik Hrbatý .

Hantuchová began her professional career in May 1999. She celebrated her first tournament victory on the WTA Tour in 2002 in Indian Wells . That year she was named "Most Improved Player of the Year" on the tour. She was also nominated for the Laureus Award as “World Newcomer of the Year”. In 2004 she separated from her coach Nigel Sears, but later resumed the collaboration. From mid-2005, her form curve showed up again, but without being able to regain her good positions from 2003/2004.

Hantuchová built on her results from the previous year and ended the year in 18th place. She celebrated outstanding successes in 2006 with the finals in Zurich (defeat against Marija Sharapova ), the quarter-finals in Stuttgart (against Nadja Petrowa ) and the last sixteen in Melbourne (against Maria Sharapova) , Paris (against Kim Clijsters ) and Wimbledon (against the eventual finalist Justine Henin ). In Doha and Rome she won the double tournament with Ai Sugiyama; at the French Open they lost the final against the top seeded team Samantha Stosur / Lisa Raymond .

Hantuchová finished her most successful year in individual after 2002 with rank 9. In 2007 she won the Indian Wells tournaments (in the final against Swetlana Kuznetsova ) and Linz (against Patty Schnyder ). She lost the round of 16 in Melbourne to Kim Clijsters and that of Wimbledon against Serena Williams . She failed in the semifinals in Rome and Doha to Svetlana Kuznetsova and in Stanford to Anna Tschakwetadze . In the final of Luxembourg she lost to Ana Ivanović , in that of Bali Lindsay Davenport . In doubles, she was eliminated from the side of Ai Sugiyama in the quarter-finals in Melbourne against the eventual winners Cara Black and Liezel Huber . The same duo also got the upper hand in the semi-finals in Miami , where Hantuchová competed with Martina Hingis .

Hantuchová celebrated her greatest success in singles at a Grand Slam tournament in 2008 at the Australian Open. She got there to the semi-finals, which she lost to Ana Ivanović after a 6-0 lead in three sets. In the quarter-finals of Indian Wells she drew the short straw against Sharapova. After her injury-related break (stress fracture in her right foot) from mid-April to the end of June, her best result was reaching the semifinals in Bali , in which she was defeated by Tamira Paszek . She finished the year as 21st in the world rankings. She achieved her best double result in Indian Wells, where she lost in the semifinals with Ai Sugiyama to the pairing Dinara Safina / Jelena Wesnina . 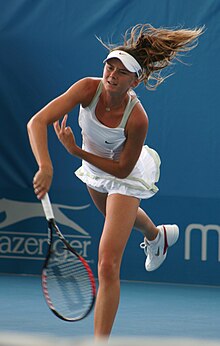 2009 at the tournament in Brisbane

Your individual results in 2009 looked similarly mixed. She lost in the round of 16 at Wimbledon and the US Open to Serena Williams, in the quarter-finals in Cincinnati she lost to Flavia Pennetta and in the semi-finals in Warsaw she was left behind against Alexandra Dulgheru . She finished the year in 24th place in the world rankings. In doubles, she lost on the side of Ai Sugiyama in the finals in Melbourne (against Serena and Venus Williams ), Rome (against Hsieh Su-wei and Shuai Peng ) and Tokyo (against Alissa Kleibanowa and Francesca Schiavone ).

In 2010 she was eliminated in the round of 16 in Paris against Jelena Janković , in the semifinals of Charleston and San Diego against the eventual tournament winner Samantha Stosur and Agnieszka Radwańska and in the final of Monterrey against Anastassija Pawljutschenkowa .

In February 2011, Hantuchová won her fourth WTA title at the PTT Pattaya Open . At the French Open, she advanced to the second round with a victory over top seed Caroline Wozniacki (6: 1, 6: 3), in which she was defeated by Svetlana Kuznetsova in three sets. After her doubles partner Ai Sugiyama had ended her career in 2009, Hantuchová had to endure a long dry spell in doubles with alternating partners before she could build on earlier successes. She was in Miami with Agnieszka Radwańska - they only played together for the fourth time - in the final of the Sony Ericsson Open against the third-placed pairing Liezel Huber / Nadja Petrowa. In Birmingham she reached the individual final with a three-set victory over Ana Ivanović, who was seeded at 2, but lost there smoothly to Sabine Lisicki . At the grass tournament in Eastbourne , she moved into the semifinals with wins over Li Na and Venus Williams, but had to give up there against Petra Kvitová in the second set due to injury. Nevertheless, she was able to start at Wimbledon, where she was eliminated in round three against her doubles partner and later finalist Viktoriya Asaranka . In preparation for the US Open, she was defeated by Sharapova in the round of 16 at Stanford and - despite a first set won 6-0 - Radwańska in the quarter-finals in Carlsbad in three sets. At the US Open, she reached the semi-finals alongside Radwańska, in which the two Huber and Raymond lost 2: 6, 4: 6.

At the WTA tournament in Brisbane , Hantuchová reached the final in 2012, at the Australian Open she reached the third round. In February she won her 30th match in the Fed Cup in Bratislava , and with her two victories against France she led Slovakia into the play-off round of the world group. With a final win over Marija Kirilenko , she defended her title in Pattaya . In Paris she did not appear in 2012 and in the other Grand Slam tournaments in Wimbledon and New York she was eliminated in the first round.

In the first months of 2013, Hantuchová did not perform well. In June she won the tournament in Birmingham , where she first defeated Laura Robson and Francesca Schiavone and then defeated 13 years younger Donna Vekić in the final . In August she made it to the quarterfinals again after eleven years at the US Open .

At the Australian Open she reached the third round in 2014; she beat Heather Watson and Karolína Plíšková before losing to Serena Williams . At the French Open she defeated Jovana Jakšić and in round two Claire Feuerstein before she was eliminated by Angelique Kerber .

In 2015 she reached the second round at the Australian Open . With a final win over Ajla Tomljanović , she secured her third title in Pattaya . During the 2017 Wimbledon Championships , she announced her resignation.

World ranking positions at the end of the year