The title of this article is ambiguous. Further meanings are listed under Australian Open (disambiguation) . 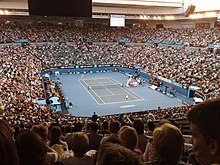 The Melbourne Arena , with 10,500 seats the second largest stadium in Melbourne Park

The Margaret Court Arena , the third largest square in the plant 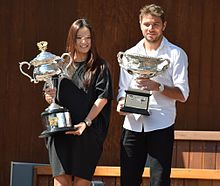 The individual winners of 2014, Li Na and Stan Wawrinka

The Australian Open ( AusOpen or AO for short ; also known as the "Happy Slam" ) is the first of the four Grand Slam tournaments of the year. The tennis tournament has been held in January in Melbourne , Australia's second largest city , since 1987 . The game has been played since 1988 in Melbourne Park , which was specially planned for this sporting event and offers a total of 24 hard courts on an area of ​​20 hectares. The three largest seats are the Rod Laver Arena (14,820 seats), Melbourne Arena (10,000 seats) and Margaret Court Arena (over 7,500 seats) with sliding roofs . Show Courts 1-3 are also equipped with larger grandstands.

The Australian Open is the largest regular sporting event on the Australian continent . In 2010, over 650,000 spectators came in the two tournament weeks. The individual finals regularly achieve a participation rate of 70 to 80 percent.

In 1904 the Australasian Lawn Tennis Association was founded with the participation of Australia and New Zealand to host the Australasian championships and to take part in the Davis Cup . In November 1905, the first championship of Australia and New Zealand was held at the Warehouseman's Cricket Ground in Albert Park, Melbourne, in which 17 men took part. The first final was won by Rodney Heath against Dr. Arthur Curtis .

In the following years, the venues for the championships between Australia and New Zealand changed. In 1922 New Zealand withdrew from the partnership. In 1927 the tournament was consequently renamed the Australian championships . After Sydney (17 times), Adelaide (14 times), Brisbane (eight times), Perth (three times) and two events in New Zealand (1906 and 1912), the final move to Melbourne followed in 1972.

Since 1922, women's singles, women's doubles and (not from 1970 to 1986) a mixed competition have been held. The tournament was canceled from 1916 to 1918 and from 1941 to 1945 due to the world wars. Margaret Molesworth won the first final . The other years dominated Daphne Akhurst , who won a total of five individual titles. After she died at the age of 29, the trophy for the women's singles Daphne Akhurst Memorial Cup was named in honor of her. The men who win the individual competition will receive the Norman Brookes Challenge Cup .

Margaret Smith Court and Rod Laver made their mark on the tournament in the 1960s . Court won the single title eleven times, the double title eight times and the mixed title four times. In 1970 it reached its peak by winning the Grand Slam . Laver, who is the only player to date to have won a Grand Slam twice (1962 and 1969), has won the individual title of the Australian Open three times.

In 1969 the tournament was an open one and renamed the Australian Open . In 1973 the Melbourne district of Kooyong became the permanent venue for the Australian Open until January 1987. Until 1977 the tournament was held in January, after which the date changed to December, so that the tournament was held twice in 1977. There was no tournament in 1986, because from 1987 on they played again in January and swapped dates with the Masters. 1988 was first played in Flinders Park (renamed Melbourne Park in 1997 ). At the same time, the new facility was played on hard courts - so-called rebound ace courts - and no longer on grass. 2008 they changed the hard court surface since is on plexicushion played -Hartplätzen.

The last Australian winners were Mark Edmondson (1976) and Chris O'Neil (1978). Edmondson was only number 212 in the world at the time of his victory . No other player has since won a Grand Slam title with such a low ranking.

Steffi Graf defeated Chris Evert in the final in 1988 . It was the start of their Golden Slam and at the same time the first final of a Grand Slam tournament that took place under a closed roof. In 2003 and 2005 to 2007 this was the case again.

Tennis players from Austria have not yet won an individual final. Oliver Marach won the doubles competition in 2018, Barbara Schett reached the mixed final in 2001.