The title of this article is ambiguous. Additional meanings are listed under Brisbane (disambiguation) .

Brisbane [ ˈbɹɪzbən ] is the capital of the state of Queensland in northeast Australia .

The city is located on the Brisbane River near where it flows into the Coral Sea . The metropolitan area has two million inhabitants. Brisbane is both Catholic ( Archdiocese of Brisbane ) and Anglican archbishopric. The petroleum industry is an important branch of the economy . Brisbane was established as a penal colony under the name Moreton Bay in 1824 and was later named after Sir Thomas Brisbane , the then governor of New South Wales .

Brisbane is known for its universities (including the Queensland University of Technology , University of Queensland and Griffith University ) as well as for the Sunshine Coast and Gold Coast holiday paradises that begin north and south of the city limits , for the ocean location and the generally good weather.

In Australian abbreviated English , Brisbane is sometimes referred to as Brissie . In addition, there are funny name variations such as Bris Vegas or Brisneyland , which are only used sporadically.

In a ranking of cities according to their quality of life, Brisbane was ranked 37th out of 231 cities worldwide in 2018. 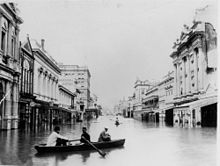 Queen Street in Brisbane during the 1893 flood

In search of a suitable location for a new penal colony, the soldier and explorer John Oxley landed on the Brisbane River in 1823 . The original colony was established in Redcliffe in 1824 , but moved upstream to what is now the city center a year later.

In 1842 the penal colony was dissolved and the land was released for free settlement. After the secession from New South Wales in 1859, Brisbane became the capital of the new colony of Queensland . However, the city was not officially granted city rights until 1902.

With the amalgamation of several surrounding towns and settlements as well as several administrative districts, the foundation stone for today's Brisbane was finally laid in 1925 .

During the Second World War , Brisbane was temporarily the headquarters of 5-star General Douglas MacArthur , the commander-in-chief of the allied forces in the Southwest Pacific. In November 1942, there were serious clashes between Australian and American soldiers, in which an Australian soldier was killed and several hundred soldiers on both sides and some civilians were injured.

After the foundation stone was laid in 1901 was from 1903 to 2008 at the Anglican St. John's Cathedral built, the last in the Gothic Revival style built cathedral . Its inauguration was on October 29, 2009.

In 1912 a five-week general strike broke out in Brisbane over a dispute over the wearing of union badges in the service of tram workers . The demonstrations, which more and more trade union organizations joined, brought public life in the city to a standstill. The government then banned demonstrations and issued bayonets to the police.

Brisbane is located in southeast Queensland, 70 km north of the Gold Coast (Australia) . The city is near the mouth of the Brisbane River, which meanders through the city and the suburbs. The metropolitan area of ​​Brisbane lies on the plain between the Great Dividing Range and the coast. Although the area is relatively flat, there are some hills up to 300 m high in the city, such as Mount Coot-tha or Mount Gravatt.

On January 10, 2011, the Brisbane River in Brisbane overflowed its banks, flooding streets and parks. When the water fell on January 14, it was announced that 30,000 buildings had been damaged by the flood and around 40,000 were without electricity, and that initial clean-up work had begun in the areas of the city that had been freed from the water. It was found on January 14th that there were 26 deaths and that 53 people are missing.

The city center, the Central Business District (CBD), is located on an area of ​​the Brisbane River with sharp bends. It covers an area of ​​2.2 km². The streets in the city center are named after members of the royal family. Streets with women's names run in an east-west direction, those with men's names in a north-south direction. Queen Street is the historic main street. It ends in the busy pedestrian zone. Queen Street is characterized by historical buildings and cultural institutions. The Brisbane River borders the CBD to the south, east and west.

The boroughs of Fortitude Valley, Spring Hill and Paddington to the north of the city center are known for numerous restaurants, shops and alternative nightlife. On the south side of the river bordering the CBD is South Brisbane. Due to the extensive South Bank Parklands, this district serves as a local recreation area for residents and tourists. Various museums and cultural centers have been set up on the banks of the park. The bridges connecting the city center and South Brisbane are the Victoria Bridge and the Kurilpa Bridge. While the Victoria Bridge is passable for motor vehicles, bicycles and pedestrians, the Kurilpa Bridge can only be used by cyclists and passers-by. Other suburbs south of the river include West End and Kangaroo Point. Brisbane International Airport and Port Brisbane at the mouth of the Brisbane River were built around 15 kilometers northeast of the Central Business District. The outer area of ​​the metropolis is bordered by Caboolture , Beenleigh, Ipswich and Moreton Bay .

Compared to other Australian cities such as Sydney or Melbourne, the population density in the city center is relatively low with 379.4 inhabitants per square kilometer. This is due to the high proportion of single-family homes that were built in the traditional Queensland style in the city center until the 1950s . Later, larger apartment blocks were increasingly built. Striking skyscrapers have only been built in Brisbane in recent years. The tallest building in the city is currently the Infinity Tower with a height of 249 m, then Soleil with 243 m.

Brisbane has a subtropical climate with warm, humid summers and mild, dry winters. The humidity is very high from November to April. Thunderstorms and hailstorms occur all year round. In recent years Brisbane has suffered from prolonged drought in the summer months.

Brisbane is home to a large number of museums and cultural institutions, several of which are world famous.

The Queensland Gallery of Modern Art (GOMA) is the largest gallery of modern and contemporary art in Australia. The museum features both Queensland art and a variety of works of art from around the world.

The Queensland Museum is a state museum and displays various ethnographic and natural history exhibits.

The Queensland Performing Arts Center is located in the South Bank borough and consists of several theaters and auditoriums that host various famous shows and operas.

The Museum of Brisbane is located in the Brisbane City Hall. It includes a changing exhibition program from the areas of city history, social history, visual arts, handicrafts and design.

Brisbane has a large number of public parks, some of which are of national importance.

South Bank Parklands is a park area of ​​17.5 hectares on the Brisbane River . Attractions are the Ferris wheel Wheel of Brisbane , an artificial lagoon with a sandy beach (Streets Beach), the South Bank Arbor, the Nepal Peace Pagoda, paths through one Rainforest, picnic areas and a boardwalk. Various restaurants and cafés invite you to linger in the park.

Roma Street Parkland is the world's largest sub-tropical garden in a city center. The park landscape consists of a large number of themed gardens and recreation areas, which are connected to one another by a network of paths and wooden walkways. Roma Street Parkland also has an open-air amphitheater.

The Brisbane City Botanic Gardens are located in the southeastern peninsula of the Brisbane River , on which the central business district of Brisbane lies, and were opened in 1855. In addition to large lawns, the park has old trees and numerous botanical rarities.

The Brisbane Botanic Gardens are a park in the Toowong district of Brisbane. The 52 hectare botanical garden is located at the foot of Mount Coot-tha. 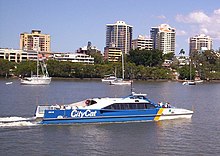 CityCat on the Brisbane River 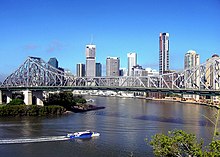 CBD and the Story Bridge 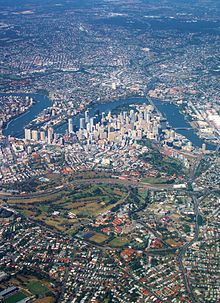 Brisbane is the industrial, commercial and financial center of Queensland. In the inner city there are mainly offices of companies in the financial and commercial sectors, as well as in the fields of information technology and telecommunications. More high-rise office buildings have been built in the vicinity to meet the growing demand. Heavy industry and manufacturing, on the other hand, are mainly located at the mouth of the river, near the port area and in new industrial areas on the outskirts.

Tourism plays another important role . Many tourists use Brisbane as a starting point for their trip to tropical Queensland.

Traditionally, many firms, particularly in the financial sector, had only one branch in Brisbane, while their Australian headquarters were in Sydney or Melbourne . As part of the “Smart State” campaign in the 1990s, the Queensland government tried to set up companies across the state. To this end, investments were made in various research facilities, particularly in the field of biotechnology. Research opportunities have been created at the universities in Brisbane. Brisbane is to become a scientific (research) center for Australia and the whole region.

The BP refinery of the same name was in operation on Bulwer Island until 2015 .

Most of the traffic in Brisbane is carried by the various highways, some of which run across the city. Compared to other major Australian cities, the network of expressways is relatively complete. Seven bridges for motor vehicles span the Brisbane River, plus two railroad and pedestrian bridges.

Brisbane has two airports : Brisbane International Airport (BNE) in the northeast of the city and Archerfield Airport in the south. While the latter is mainly used by private planes, the former is regularly served by national and international airlines.

The port of Brisbane was relocated to both sides of the mouth of the Brisbane River in the 1970s. The land was partly filled up for the construction. Today it is mainly containers, coal and sugar that are shipped there. Until the new port was built, Brisbane's port facilities were upstream near the city center.

The local public transport system is based on the three systems of bus , train and boat. The various ferries and "CityCat" called catamaran ferries on the Brisbane River as well as all bus routes in Brisbane are operated by Brisbane Transport . There are also bus routes operated by private providers in the neighboring cities. With two busways - newly created streets that are reserved for bus traffic - the average speed and thus the attractiveness of the buses could be increased. The buses have also been running underground since May 19, 2008. Your stations have platform screen doors that only open when a bus is in front of them.

These buses are supported by various railway lines that stretch far into the suburbs and reach the Gold Coast in the south. These are operated by CityTrain , a subsidiary of Queensland Rail .

Brisbane is located on the main route Sydney - Cairns , and a route branches off towards Toowoomba .

→ Main article : List of sons and daughters of the city of Brisbane

Wikinews: Brisbane  - on the news