This article covers the tennis tournament in general; For individual tournament years, see the navigation bar below, for other meanings see US Open (disambiguation) .

The US Open tennis tournament is usually the fourth Grand Slam tournament of the year. It will be played in August / September in New York City at the USTA Billie Jean King National Tennis Center in Flushing Meadows .

The part of the name Open ( English for open ) indicates that the event is open to participants regardless of nationality, status (amateur, professional), gender, age, etc. 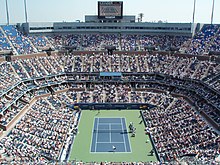 The Louis Armstrong Stadium , with 9,600 seats, the second largest stadium in the complex

In 1881 the first US National Men's Championships were held. The women's competition was first played in 1887. The first matches have not yet taken place in New York, but at the men's in the Newport Casino in Newport , Rhode Island ; The Newport ATP tournament is taking place on this site today . The ladies wore their competitions at the Philadelphia Cricket Club in Philadelphia . In 1915 the venue changed to the West Side Tennis Club in Forest Hills in Queens , New York , and in 1978 they moved a few kilometers to Flushing Meadows. In the USTA Billie Jean King National Tennis Center built there , the Louis Armstrong Stadium initially served as the center court until the Arthur Ashe Stadium was built there in 1997 . This stadium, named after the American tennis player Arthur Ashe , is by far the largest tennis facility in the world with 22,547 seats. Up to and including 1974, the US Open was played on grass before switching to clay courts (Har-Tru) for three years . Since 1978 it has been played on hard court surfaces ( DecoTurf ) , a concrete-plastic mixture.

Since 2016 Arthur Ashe Court has had a sliding roof that can be closed when it rains. This means that an encounter can continue when it starts to rain, interrupting it for about fifteen minutes, which is needed to close the roof. Since the tournament will mainly be played on Arthur Ashe Court within the second week , weather-related game abandons or even postponements are excluded. Since then they have returned to the old mode of holding the women's final on Saturday and the men's final on Sunday.

The women have a heat break of 10 minutes between the 2nd and 3rd set, during which they stay in an air-conditioned area. Since August 2018, men have also been allowed a break at temperatures above 35 ° C, between the 3rd and 4th set.

In 2020 it was the second Grand Slam of the year, as the French Open was postponed to autumn due to the Covid-19 pandemic and the tournament at Wimbledon was canceled.

Before the Open Era , three men - Richard Sears (1880s), William Larned (1910s) and Bill Tilden (1920s) - were the most successful with seven wins each; they are the record winners of the tournament, with Sears winning his seven titles in a row. However, this was also due to the mode, because by 1911 the defending champion was automatically qualified for the final. Since 1968, Jimmy Connors , Pete Sampras and Roger Federer have been the most successful with five wins, Federer even won his five titles in a row. Connors managed the feat of being the only player to win the US Open on three different surfaces.

In doubles, Richard Sears, James Dwight and Holcombe Ward are record winners with six titles, in the Open Era the twins Bob and Mike Bryan were the most successful with five titles. Todd Woodbridge and Mark Woodforde are the only double to have defended a double title since 1968.

The American Molla Mallory is the record winner with eight titles that she won between 1915 and 1926; after 1968 Chris Evert and Serena Williams were the most successful single players with six US Open titles each. Mallory and Evert also managed to win four titles in a row, which is also a record.

In the 1940s and 1950s Margaret Osborne duPont won the women's doubles competition a total of 13 times, making her the record winner; with 10 wins she also holds the record for the most double titles in a row. Martina Navrátilová was most successful in the Open Era, winning 9 double titles from the late 1970s to the early 1990s. The Open Era record for most double titles in a row hold Virginia Ruano Pascual and Paola Suárez , who were able to win the double competition three times in a row from 2002 to 2004.

Margaret Osborne duPont and Margaret Smith Court are record winners with eight mixed titles, and Court, together with Martina Navratilová and Billie Jean King, also holds the Open Era record of three titles. Before 1968, Bill Tilden and Bill Talbert were the most successful men with four mixed victories; since the beginning of the Open Era, Todd Woodbridge and Bob Bryan have held the record with three titles each.

Eight Germans have so far won a title at the US Open: Henner Henkel and Gottfried von Cramm in 1937 in men's doubles, Claudia Kohde-Kilsch in 1985 in ladies' doubles, Boris Becker in 1989 in men’s singles and Philipp Petzschner in 2011 in men’s doubles; With five wins and three other finals, Steffi Graf is by far the most successful German at the US Open. She won her first title in 1988; she finished a calendar year grand slam as the second woman in the Open Era . In 2016 Angelique Kerber won the women's singles, Laura Siegemund also won the title in the mixed competition.

From a Swiss point of view, in addition to the five titles by Roger Federer (2004–2008) and Stan Wawrinka's victory in 2016, Martina Hingis' titles in singles in 1997, doubles in 1998 and 2015 and mixed in 2015 should also be mentioned. Hingis reached the individual finals two more times. In the men's doubles, no Swiss could enter the list of winners, Heinz Günthardt reached the final in 1981; In 1985, however, Günthardt won the mixed competition at Flushing Meadows with Martina Navrátilová.

In the individual, neither an Austrian nor an Austrian reached the final. In the men's double final, however, Julian Knowle (together with the Swede Simon Aspelin ) and Jürgen Melzer (with Petzschner) were victorious in 2007 ; they are the only Austrian US Open winners.

Commons : US Open  - collection of pictures, videos and audio files