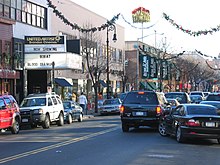 Forest Hills is a borough of Queens , one of the five boroughs of New York . Forest Hills is bounded to the north by Rego Park, to the east by Flushing Meadows Corona Park , and to the south by Forest Park. It is close to New York's JFK International and LaGuardia airports.

Sons and daughters of the district