The oldest and most prestigious tennis tournament in the world is known as the Wimbledon Championships (also known as Wimbledon for short ) . From the beginning of July, the Lawn Tennis Championships will be held every year for two weeks in Wimbledon , a district of London . It is the third Grand Slam tournament of the year and the only one that is played on grass . The places in Wimbledon are colloquially referred to as "holy lawn". The tournament is one of the largest and most important sporting events of modern times. In 2019 the 133rd edition of the tennis tournament took place from 1 to 14 July.

The Center Court, already provided with the lockable roof 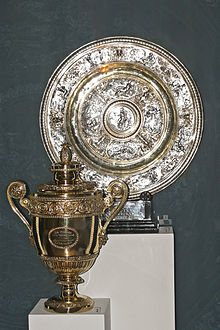 The first Lawn Tennis Championships began on July 9, 1877 on a site on Worple Road in Wimbledon and were held by the All England Lawn Tennis and Croquet Club . The reason for this was the bill over 10 pounds for a lawn roller that had to be replaced. So the idea was born to hold a tournament and to charge the audience for entry.

Initially only allowed for men, competitions for women singles and men doubles were introduced in 1884. Women's doubles and mixed were included in the tournament program in 1913. In 1922 a new tennis complex was inaugurated on Church Road. The stadium, designed for 15,000 spectators, has developed into the "Mecca of tennis". The championships were first televised in 1937. For the first time since the Second World War , a tennis tournament was canceled due to the COVID-19 pandemic in 2020.

To this day, Wimbledon has retained a special, old-fashioned elegant character that sets the tournament apart from all others. This is the only place where the old rule that 90 percent of the playing attire must be white still applies. The audience traditionally eats strawberries with cream and endures the rain, which often occurs and which compels breaks, with equanimity. But tradition is also that the first Sunday of the tournament is free of play, i.e. a day of rest. The opening game takes place on Center Court and is reserved for the defending champion in men's singles.

After having George V from 1907 a member of the first British royal family had been at Wimbledon as a guest, a royal was there in 1922 Loge (engl. Royal box ) furnished with 74 seats, the members of the royal family, politicians, athletes and other invited celebrities are reserved. As President of the All England Lawn Tennis and Croquet Club , Edward, 2nd Duke of Kent , usually presents trophies to the winners of Wimbledon. Queen Elizabeth II has also already carried out the award ceremony in Wimbledon. B. in the years 1957 or 1962. From 1969 to 2001 this task was taken over by the wife of the Duke of Kent, Katharine, Duchess of Kent , who then retired from public life. Until a rule change in 2003, the players at the award ceremony were expected to politely express their respect in front of the members of the royal family with a curtsey (women) or a bow (men).

Today tournaments are held for singles and doubles for women and men. In addition, a "mixed", a mixed doubles, as well as junior tournaments take place. The most important matches are played on the “Center Court” and the “Court No. 1 ”(last before the new building, notorious as the“ hangman's backyard ”). The "Court No. 2 ”is also called“ The Graveyard ”(in German“ Friedhof der Stars ”) because of the numerous favorite falls. In the first rounds there are also many smaller pitches.

The field in singles consists of 128 men and women each, in doubles there are 64 pairings. In contrast to the other Grand Slam tournaments, the mixed doubles are still played with 48 pairings (32 pairs in the other slams). The qualification in the individual plays out from 128 men and women 16 places in the main field. The women's field was increased from 96 to 128 places in 2019. This fell victim to the double qualification, which was the only tournament in Wimbledon until 2018 that had a tradition. The men's singles and doubles are played in the best of 5 format from the last round of qualification , the women and the mixed doubles are played for two sets of wins.

The record winner on Church Road is the native Czech, later American and today's dual citizen Martina Navrátilová with nine individual victories between 1978 and 1990. Between 2003 and 2017, Swiss Roger Federer was eight times successful in the men's category .

After the Englishman Fred Perry , who emerged as the winner of the men's competition in 1934, 1935 and 1936, it took 77 years until the Scottish Andy Murray, another British player, won the men's singles at Wimbledon in 2013.

The winners of the various competitions receive trophies. The best known and most traditional are the two trophies for the men's and women's singles. The challenge cup , which is 44 centimeters high, is presented to the winner of the men's singles . The winner of the women's singles has been receiving the Rosewater Dish , a silver presentation plate for rose water with a diameter of 48 centimeters , since 1886 . This was commissioned in 1864 from a silversmith in Birmingham for 50 guineas (converted, taking into account the British RPI (2014) around 4610 pounds or 6325 euros).

In 1931 and 1991 there was a German final. Cilly Aussem won the women's singles against Hilde Krahwinkel-Sperling in 1931, and Michael Stich won the men's competition in 1991 against Boris Becker.