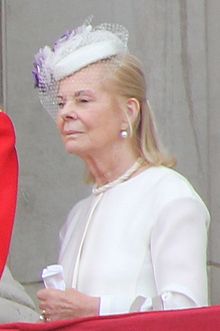 HRH Katharine, Duchess of Kent , GCVO (* 22. February 1933 in Hovingham Hall, North Yorkshire born when Katharine Lucy Mary Worsley ), is through marriage a member of the British Royal Family . She is the wife of Prince Edward , a grandson of King George V and Queen Mary and the cousin of Queen Elizabeth II.

She was educated at Queen Margaret's School near York and Runton Hill School in Norfolk . During her school days she was introduced to music and learned to play the piano , organ and violin , which she still plays today. She consolidated her musical knowledge in a girls' boarding school in Oxford . She later worked in a children's home in York and at a nurses' school in London .

On June 8, 1961, she married Prince Edward, 2nd Duke of Kent, the eldest son of Prince George, 1st Duke of Kent and Princess Marina , in York Minster . The Duchess had met the Duke in Catterick in 1956 , when he was stationed there as a soldier, and became engaged to him in March 1961.

The Duke and Duchess of Kent have three children:

In 1975 the Duchess suffered a miscarriage at the age of 42 and a stillbirth in 1977 , which led to depression . In the early 1980s, a divorce from her husband was on the table, but Queen Elizabeth II spoke out against it. After the Duchess appeared to have recovered in the early 1980s, she withdrew from public life in the late 1990s. Since the late 2000s, she takes occasional public appearances again true as at the inauguration of a bronze - statue of Queen Mum 2009, or at the meeting of the royal family on the balcony of Buckingham Palace at the Trooping the Color 2010 and 2011. The couple has lived separately since the 1980s, but remained married and appeared together on public occasions, such as the wedding of Prince William and Kate Middleton in 2011 and the diamond jubilee of Elizabeth II in 2012.

In private life, the Duchess prefers to be called Katharine Kent . Nonetheless, she expressed her preference to be known as Katharine, Duchess of Kent , a designation that otherwise only divorced or widowed nobles are entitled to. Her official title is Her Royal Highness The Duchess of Kent .

The official residence of the duke couple is Wren House on the grounds of Kensington Palace in London , although the duchess lives in a nearby rental apartment on a daily basis .

The Duchess feels strongly connected to the world of music and has been a member of various choirs . From 1996 to 2004 she worked under the name 'Mrs. Kent 'as a music teacher in Kingston upon Hull , without her students knowing her true identity. In 2004 she founded the Future Talent Foundation , which introduces young people to music from an early age and promotes young talents. The Duchess is the curator of the National Foundation for Youth Music in London, Chairwoman of the Royal Northern College of Music in Manchester and Ambassador for Aldeburgh Productions in Suffolk .

The Duchess was known from the 1970s to 2001 for handing over the winners' trophies to the female winners at the annual Wimbledon Championships . She took over this role from her mother-in-law Princess Marina , who had been president of the All England Tennis Club from the death of her husband in 1942 until her own death in 1968 . In 1969, their son, Duke Edward, became president of the tennis club and his wife, Duchess Katharine, presented the trophies at the women's finals . The duke traditionally presented the trophies to the male winners. With her warm-hearted and casual demeanor - such as her comforting hug from Jana Novotná on Center Court , who lost to Steffi Graf in 1993 - the Duchess won many admirers. In 1999, however, the management of the All England Tennis Club was upset about seats in the royal box. After the Wimbledon Championships in 2001 , the Duchess gave up her official role at the Wimbledon Tennis Championships as part of her retreat from public life. Since then, the trophies for the first and second winners in both the men's and women's finals have been awarded by their husband alone.

The Duchess gained considerable publicity with her conversion to Catholicism in 1994, the first public conversion of a senior royal family member since the Act of Settlement was passed in 1701. This was a personal choice and it was approved by the queen . This had no effect on the line of succession : although a passage in the Act of Settlement from 1701 provided that a member of the royal family loses his place in the line of succession if he marries a Catholic. Since the conversion of the Duchess took place later, after the marriage, the Duke of Kent has not lost his place in the British line of succession.

The Duchess's youngest son, Lord Nicholas Windsor, her grandson Edward Windsor, Lord Downpatrick, and her granddaughter Lady Marina-Charlotte Windsor are also Catholics. Her eldest son, George Windsor, Earl of St Andrews , the father of Lord Downpatrick, married a Catholic; the resulting exclusion from the line of succession was revised in 2015 by the Succession to the Crown Act , which repealed the corresponding provision of the Act of Settlement.

Coat of arms of Katharine, Duchess of Kent