HRH Camilla Rosemary, Duchess of Cornwall , GCVO , (born July 17, 1947 in London ; born Camilla Rosemary Shand ; divorced Camilla Parker Bowles ) is a British noblewoman . As the second wife of the British Crown Prince Charles , she has been Crown Princess of the United Kingdom since 2005 .

Camilla Rosemary Shand is the daughter of Major Bruce Middleton Hope Shand , Vice Lord Lieutenant of East Sussex (1917-2006) and Rosalind Maud Cubitt (1921-1994). Her paternal grandparents were the architect Philip Morton Shand (1888–1960) and Edith Marguerite Harrington (1893–1981). Her maternal grandparents were Roland Calvert Cubitt, 3rd Baron Ashcombe (1899–1962) and Sonia Rosmary Keppel (1900–1986). She is also the great-granddaughter of Alice Keppel , a mistress of Edward VII , who in turn is the great-great-grandfather of her husband Prince Charles. In addition, Camilla descends from Charles II of England , from an illegitimate relationship with the Duchess of Portsmouth . Camilla has two siblings, Sonia Annabel Elliot (* 1949) and Mark Roland Shand (1951-2014).

Camilla grew up in The Laines , Plumpton, East Sussex from 1951 . She began her schooling at Dumbrells School in Ditchling, Sussex when she was five and continued at Queen's Gate School in South Kensington when she was ten . She graduated from this school with the O-levels (corresponds to the qualification of lower secondary level). She then attended the Mon Fertile School in Switzerland and the Institut Britannique in Paris . In 1965 she completed her schooling without a high school diploma. In the same year she made her debut in London. She worked for the interior design company Sibyl Colefax & John Fowler for a year . Nothing is known about any further employment.

Relationship with Prince Charles and marriage to Andrew Parker Bowles

In the following years, Camilla withdrew from the public. In 1999, she and Charles were photographed together for the first time in many years, leaving a hotel after a party. From 1999 the couple was often seen together in public. It was first photographed kissing on the sidelines of a charity event in 2001.

On February 10, 2005, a spokesman for the heir to the throne confirmed that the couple would marry on April 8. In consideration of the funeral of Pope John Paul II , the wedding was postponed for one day at short notice. On April 9, 2005, Camilla Parker Bowles and Prince Charles were civilly married at Windsor City Hall. The wedding was only performed in a civil ceremony, as the Anglican Church of England refused to marry divorced people whose former spouses are still alive. Following the civil wedding, a church blessing was held in St. George's Chapel in Windsor Castle . Like the British royal family, Camilla is a member of the Church of England . 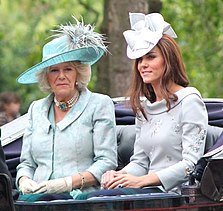 Camilla and Catherine, Duchess of Cambridge at Trooping the Color , June 17, 2012.

The Duchess supports Prince Charles in his representative duties. She regularly accompanies him on trips abroad and on state visits. Camilla is the "National since 2001 President osteoporosis -Gesellschaft" ( National Osteoporosis Society ). Fighting this disease is particularly important to her, as her mother and grandmother died as a result of the disease.

She is also the patron of Emmaus , an association for the homeless , and various organizations that care for crime victims and children. Because of her interest in animals, she is a patron of the Animal Care Trust , Brooke Hospital for Animals, and the British Equestrian Federation . She also advocates women's rights. She heads a total of 51 non-profit organizations. Camilla has also served as Chancellor of the University of Aberdeen since 2013 .

The duchess is interested in art and culture. Because of this interest, she is a patron of the London Chamber Orchestra, the New Queen's Hall Orchestra and the Tetbury Film Society . She also loves nature and is engaged in fishing , walking , gardening , hunting and horse breeding . She owns several horses and dogs. In addition to her native English, Camilla also speaks French. She owns the Ray Mill House estate in Wiltshire . 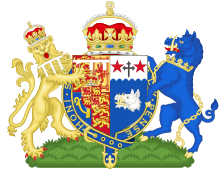 Coat of arms of Camilla, Duchess of Cornwall

Camilla, who became the second most important woman in the British monarchy with the wedding, uses her husband's titles as a courtesy title . She also bears the title of Princess of Wales , but does not use it as it is still strongly associated with Charles' late wife Diana . She is now officially the first title of Duchess of Cornwall . In Scotland she holds the most senior Scottish title of Duchess of Rothesay .

If her husband ascends to the throne, Camilla automatically becomes the Queen Consort of the United Kingdom. An announcement from 2005, according to which Camilla would carry the title of Princess Consort, has since been removed from the Prince of Wales homepage.

On July 17, 2005, the coat of arms , a union of the coats of arms of her husband as Prince of Wales and her father, Major Bruce Shand, was published.

Wikinews: Camilla Mountbatten-Windsor  - in the news