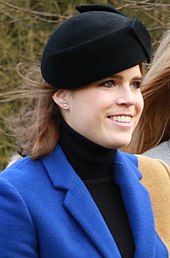 Her older sister is Princess Beatrice of York . Princess Eugenie is number 10 in line to the British throne .

Eugenie skiing with her sister Beatrice (2004) 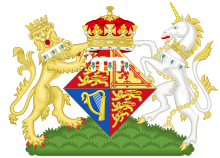 Princess Eugenie was born on March 23, 1990 at Portland Hospital, London. It was named after the British princess and later Queen of Spain Victoria Eugénie von Battenberg . She was baptized in Sandringham on December 23, 1990 by the Bishop of Norwich. Her godparents were James Ogilvy , Captain Alastair Ross, Sue Ferguson (her step-grandmother), Julia Dodd-Noble and Louise Blacker.

After two different kindergartens, Princess Eugenie attended Coworth Park School , Surrey , from 1995 to 2001 . From 2001 to 2003 she was a day pupil at St George's School , Windsor . During school she lived with her father at the Royal Lodge on the grounds of Windsor Castle . Her mother lived in a neighboring building. In 2002 she had to have an operation for scoliosis . From 2003 to 2008 she attended Marlborough College boarding school . In the summer of 2007 she successfully completed her “AS level” there with three A grade and one B grade in the subjects of politics, art history, art and English. In summer 2008 the final school leaving certificate was the “A-Level” with grade A in art and English literature and grade B in art history. She describes herself as “more of a worker than a clever person”. After graduating from school, the princess took a year off. During this break, she traveled through Asia and Kenya.

In 2012, Princess Eugenie successfully completed her studies in English literature, art history and politics at Newcastle University, which she began in September 2009 . At first, Eugenie had been turned down by Newcastle University because her application to study English literature had been deemed inadequate. However, when it was discovered who she was, she was offered a place at university.

After internships at Christie's auction house in 2010 and the Royal Collection in 2013, Princess Eugenie moved to New York in October 2013 to take up a position at the online auction house Paddle8.

Princess Eugenie has been a director at Galerie Hauser und Wirth in London since 2015 .

Between 2009 and 2010 she was in a relationship with Otto Brockway, a nephew of Richard Branson . The entrepreneur Jack Brooksbank (* 1986) has been the man at her side since 2010 . In his family, the title of baronet has been passed on to the eldest son or his closest male relative since 1919 . Since 1983 a cousin of his father's has been the title holder, Sir Edward Nicholas Brooksbank, 3rd Baronet (* 1944). In January 2018, the couple announced their engagement. The wedding took place on October 12, 2018 at St George's Chapel within Windsor Castle. Her official title has since been HRH Princess Eugenie Victoria Helena, Mrs. Brooksbank . She gave up the addition of York at the wedding. Since she and her husband are descendants of Thomas William Coke, 2nd Earl of Leicester (1822-1909), they are related by blood. Eugenie's mother is a great-granddaughter of Mervyn Wingfield, 8th Viscount Powerscourt , whose mother, Lady Julia Coke, was a daughter of Jack's great-great-grandfather Earl Thomas Coke, son of Thomas William Coke, 1st Earl of Leicester .

Princess Eugenie takes part in public appearances by the royal family, such as Trooping the Color . Together with her parents, she supports charitable projects. In November 2008 she accompanied her father, Prince Andrew, on an official trip to Asia.