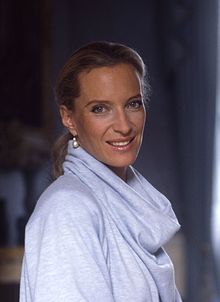 Princess Michael (German about Princess Michael ) is the only daughter of Günther Freiherr von Reibnitz (1894–1983) and his second wife Maria Anna Carolina Franziska Walpurga Bernadette Countess Szápáry von Muraszombath, Széchysziget and Szapár (1911–1998), daughter of the diplomat Graf Friedrich von Szápáry . Her maternal grandmother was a Princess von Windisch-Graetz , her father came from a family of Silesian barons and was a landowner and horse breeder. According to the Sunday Telegraph , before the referendum in Upper Silesia in 1921, which was accompanied by uprisings , he and his brother Joachim set up two free corps to secure the border on the Oder between Cosel and Ratibor (" Grenzschutz Ost "). In 1985 he hit the headlines when the Daily Mirror published that he had been a member of the Reiter-SS since 1933 . Thereupon Princess Michael published documents from the trial chamber proceedings concerning her father , according to which he was appointed SS honorary leader without authority only because of his position as Silesian Gaujägermeister and classified in the appeal process as a “follower” and “not a member of the organizations declared criminal in the Nuremberg judgment” had been. From 1934 he came into conflict with the Nazi regime because of his openly practiced Catholic faith, the good treatment of " civilian workers " and because he allowed Jews to hunt , that he lost his post as Gaujägermeister in 1944, to the notorious SS special unit Dirlewanger was detached and only escaped it by staying with his old Wehrmacht unit and being expelled from the SS for disciplinary reasons. 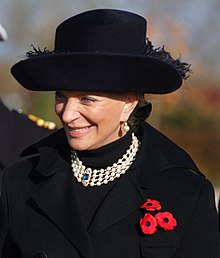 Her parents divorced in 1946. The father went to South Africa and later lived in Mozambique . Marie Christine von Reibnitz lived with her mother in Australia, in a suburb of Sydney.

Her first marriage was to the banker Thomas Troubridge; the marriage was divorced in 1977 and Pope Paul VI. annulled the church marriage in 1978. She met her second husband, who was a schoolmate of her ex-husband, in London. They married in 1978 in Vienna and later in church in London. By marrying a Catholic, Michael von Kent retired from the line of succession under the Act of Settlement of 1701. The marriage had two children, Lord Frederick Windsor (* 1979) and Lady Gabriella Windsor (* 1981). They are members of the Church of England and are therefore considered in the line of succession.

By marrying Prince Michael, the bride did not acquire her own princess title (such as "Princess Marie-Christine"), so - as is customary in England - she has her husband's first name in the title, "Princess Michael". However, there is currently no other princess by marriage in the English aristocracy who does not bear the title of duchess or countess under her own first name, and thus Princess Michael is the only one who has this combination of titles. Within the royal family, for example the Queen, the princess is called by her first name, Marie-Christine.

HRH Princess Michael at a banquet in 2003

In 2005, Princess Michael hit the headlines after she had condescended to journalist Mazher Mahmood , who posed as a sheikh, about members of the royal family, such as Prince Charles and his second wife, Camilla .

In 2006 Princess Michael was photographed holding hands in Venice with the widowed Russian furniture dealer and multi- millionaire , Mikhail Kravchenko (* 1966) . Rumors of an affair in the British press were denied by her. Kravchenko was found shot dead in Moscow in 2012.

Both Prince and Princess Michael of Kent, used by the British press for their brash style as Princess Pushy (dt. About Princess Pushy ) is called, also were repeated in the criticism to exploit their royal status for personal gain. In 2002, the British press revealed that the couple was paying a mere £ 276 monthly rent for the ten-room apartment in Kensington Palace, which at the time cost British taxpayers more than £ 1 million to maintain, while the actual rent was paid monthly rental costs were £ 10,000. A group of members of the House of Commons then demanded that the couple be evicted . Prince Michael has been paying the annual rent of £ 120,000 since 2010 after Elizabeth II had paid the costs since 2002 and he had sold his second home, Nether Lypiatt, acquired in 1980, at Stroud for £ 5 million in 2005.