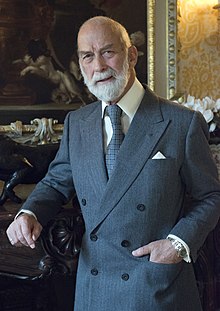 HRH Prince Michael of Kent ( Michael George Charles Franklin , born July 4, 1942 in Iver , Buckinghamshire ), GCVO , is a member of the British royal family, a grandson of King George V. He is named after the brother of the last Tsar of Russia , Mikhail Alexandrovich Romanov, named whose great-nephew he is. He uses the courtesy salutation "His Royal Highness, the Prince Michael of Kent", whereby the salutation "Prince" only refers to the United Kingdom and the addition "of Kent" expresses his descent from the "Duke of Kent". Michael is therefore not to be called the "Prince of Kent". Prince Michael of Kent does not perform regular royal duties on behalf of Queen Elizabeth II , instead he runs his own consulting business and takes on various commercial assignments around the world. He has also presented several television documentaries that feature European royal families.

Prince Michael of Kent was born on July 4th 1942 in Iver, west of London. His father was Prince George, 1st Duke of Kent , the fourth eldest son of King George V and Queen Mary . His mother was Marina, Duchess of Kent , a daughter of Prince Nicholas of Greece and Grand Duchess Jelena Vladimirovna Romanova of Russia, a granddaughter of Tsar Alexander II. As the grandson of a British ruler, he was called a "Prince of the United Kingdom of Great Britain and Northern Ireland" Born with the prefix "His Royal Highness". At his baptism on August 4, 1942, Franklin Delano Roosevelt , King George II of Greece , King Haakon VII of Norway, the Queen of the Netherlands Wilhelmina , Princess Patricia of Connaught , Princess Viktoria of Hesse-Darmstadt , the Crown Princess of Greece Friederike von Hannover and Henry, Duke of Gloucester , participated. Michael's father George died in an airplane crash near Caithness , Scotland on August 25, 1942, just a few weeks after his son's baptism.

Prince Michael attended the Royal Military Academy Sandhurst from January 1961, 1963 he was transferred to the 11th Hussar Regiment. He was stationed in Germany, Hong Kong and Cyprus during his service. His squadron formed part of the UN peacekeeping force in Cyprus . In 1981 he retired from the army. In 1994, Prince Michael became an honorary commodore of the Royal Navy Reserve, and in 2002 he was made honorary air commander of the RAF Benson Airport. He is an Honorary Colonel in the Essex and Kent Scottish Regiment in Canada. 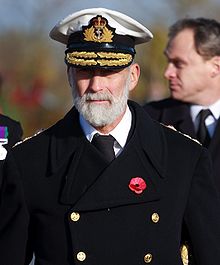 On June 30, 1978, Prince Michael married Marie Christine von Reibnitz , the only child of the late Silesian Baron Günther von Reibnitz and his ex-wife Maria Anna Carolina Franziska Walpurga Bernadette, Countess von Szapáry, who also came from Hungary, in a civil ceremony in the Vienna City Hall from Muraszombath, Széchysziget and Szapár. The marriage was controversial because the baroness was not only Catholic but also divorced. She was previously married to the banker Thomas Troubridge; they separated in 1973 and divorced in 1977 - 14 months before her marriage to Prince Michael.

Under the Act of Settlement , the law regulating the British succession to the throne of 1701, Prince Michael forfeited his place in the line of succession through marriage to a Catholic woman. However, his wife became a princess of the United Kingdom and is called "Her Royal Highness Princess Michael of Kent" (not Princess Marie-Christine, as she is not legally a princess herself, but can only use the title through her marriage). Since March 26, 2015, Prince Michael has been back in line to the British throne, as marriages with Catholics are again permitted under the Perth Agreement .

Prince and Princess Michael of Kent have two children, both of whom never lost their place in the line of succession because they belong not to the Roman Catholic but to the Anglican Church:

Both Prince Michael and his wife, dubbed Princess Pushy by the British press for their brash manner , have been negatively targeted by the media. Most of the criticism has been aimed at the couple using their royal status for their personal gain. In 2002 the British press revealed that the couple was paying a mere £ 276 monthly rent for a ten-room apartment in Kensington Palace , which at the time cost British taxpayers more than £ 1 million to maintain, while their own was paid monthly rental costs were £ 10,000. A group of House of Commons MPs then called for the couple to be evicted . Since 2010 Prince Michael has paid an annual rent of £ 120,000 after Elizabeth II had paid the costs since 2002 and he sold his second home, Nether Lypiatt near Stroud , which he had acquired in 1980, for £ 5 million in 2005.

Prince Michael is the third child of George V's fourth son. He was not expected to take on royal and official duties. Prince Michael, unlike his older brother Edward, 2nd Duke of Kent (* 1935) and his sister Princess Alexandra (* 1936), has therefore taken on the official duties and is remunerated (although these expenses have been transferred from Elizabeth II to the be repaid treasury) never a parliamentary annuity ( English annual parliamentary allowance received). As a member of the British royal family, however, Prince Michael is always treated as an eminent figure. For example, the Queen had given him the apartment in Kensington Palace when he married in 1978 (see also the Critique section ).

Prince Michael supports various charities. Among other things, he is the Commonwealth President of the Royal Life Saving Society. As a Freemason , he is Grand Master of the Grand Lodge of Mark Master Masons of England and Wales and its Districts and Lodges Overseas.

Since the prince received no income for royal duties, he received the queen's permission to earn his living through commercial services. In addition to his consulting business, he is also a qualified interpreter and has a perfect command of Russian.

Prince Michael has a strong interest in Russia and is known for his remarkable physical resemblance to Tsar Nicholas II . When the Tsar and his family were buried in Russia, it was Prince Michael who represented Britain at the ceremony. Prince Michael is fluent in Russian and often spends his vacations in Russia. In the novel The Black Manifesto by Frederick Forsyth , monarchy is restored in Russia, with the Prince and Princess Michael as Tsar and Tsarina. 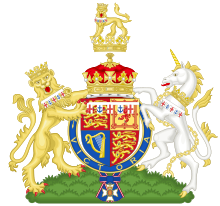 Coat of arms of the Michael of Kent

His full title since then has been: His Royal Highness Prince Michael George Charles Franklin of Kent, Knight Grand Cross of the Royal Victorian Order .