from Wikipedia, the free encyclopedia
This is the spotted version , flagged on May 9, 2020 . There is 1 pending change that has yet to be viewed. 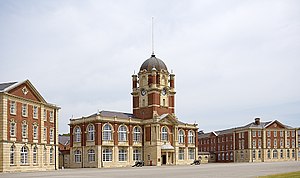 The Royal Military Academy was founded in 1741 to train cadets for the Royal Artillery and Engineers; later also for the Signal and Panzer Corps. The visit was chargeable. The academy was located in Woolwich (today south-east London ) until 1939 and was closed at the beginning of the Second World War due to mobilization .

The Royal Military College was founded in 1800 as a school for administrative officers by John Gaspard le Marchant . Two years later, a subdivision to cadets Front was formed officers ( s. Line Officers) to be formed. In 1812 they moved to the college in Sandhurst, which was expanded to include the New College in 1912 . In the 1870s, the East India Company's Military Seminary joined the RMC, which previously existed in Addiscombe , near Croydon . All officers who were to serve in the Indian army of the British Empire were trained here.

After World War II, the Royal Military Academy Sandhurst was established to continue the tradition of both RMA and Sandhurst's RMC. Today it is the only basic training facility for British Army officers.

In 1958, Field Marshal Montgomery ordered a memorial for the unconditional surrender of Northwest Germany on Victory Hill near Wendisch Evern near Lüneburg to be transported to the Royal Military Academy Sandhurst . He negotiated and signed the surrender there on May 4, 1945.

Since 1992 men and women, academics and non-academics have been taught in a uniform system, the Commissioning Course . There are also courses for short-term voluntary service in the army ( gap year ), for professionally qualified officers (such as doctors, veterinarians, nurses or priests) and courses for the Territorial Army .

Officers attend three basic courses of 44 weeks divided into trimesters ; 250 to 270 cadets begin their training per trimester. After completing the basic courses, which are also practically oriented, they receive the rank of “Junior Under Officer” and in the second part of the training they specialize in one type of service. In addition to politics , international affairs and war studies ( was studies ) taught.

Neither the Ugandan dictator Idi Amin nor the Libyan dictator Muammar al-Gaddafi were graduates of the institution, the academy announced this according to reports.

Competition venues for the 1948 Summer Olympics