The title of this article is ambiguous. Additional meanings are listed under Mark Phillips (disambiguation) . 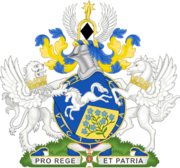 Mark Anthony Peter Phillips CVO (born September 22, 1948 in Tetbury , Gloucestershire) is a British eventing rider and trainer. He gained notoriety in particular as the first husband of Princess Anne , the daughter of Queen Elizabeth II , with whom he has the children Peter Phillips and Zara Phillips .

Mark Phillips was born to Major Peter William Garside Phillips (1920–1998) and his wife Anne Patricia (née Tiarks, 1926–1988). His sister was Sarah Anne Phillips (1951-2014). His training took place at Marlborough College and the Royal Military Academy Sandhurst . In 1969 he joined the British Army as a second lieutenant in the 1st The Queen's Dragoon Guards . He was promoted to captain in 1975 and retired from active service in 1978.

In 1972 Phillips was a member of the British national eventing team, which won the gold medal at the 1972 Olympic Games in Munich . Mark Phillips also won the Badminton Horse Trials in 1971 and 1972 on Great Ovation , 1974 on Colombus and 1981 on Lincoln .

Through his equestrian activities, he met Princess Anne, whom he married on November 14, 1973 in Westminster Abbey . On this day the Queen offered him a peer-review , which he refused. This may also have been the special wish of Princess Anne, who also refused the Queen's offer to make princes and princesses out of her children by means of letters patent .

Queen Elizabeth II awarded his father the family crest in October 1973. During his father's lifetime, Mark Phillips also wore a three-legged red tournament collar in his shield, which his son now wears in the coat of arms.

In addition to his two children from the relationship with Princess Anne, Mark Phillips has two other children. One daughter, Felicity Tonkin, was born in New Zealand in 1985 and came from an affair with art teacher Heather Tonkin. In 1991, Heather Tonkin went to court in New Zealand with a paternity lawsuit. A DNA sample confirmed that Mark Phillips is indeed her daughter's father.

In 1992, Mark Phillips divorced Princess Anne. In 1997 he married the American dressage rider Sandy Pflueger , with whom he had a daughter, Stephanie, who was born in 1997. In May 2012, he announced his separation and upcoming divorce from Pflueger. Phillips now lives with US show jumper Lauren Hough .

From 2001 to 2012, Mark Phillips was the head coach of the U.S. eventing team. The British company Barbour has named a riding jacket ("Mark Phillips Jacket") after him.