This article deals with the noble family. For the building in Frankfurt see Haus Lichtenstein .

The House of Liechtenstein is one of the oldest Austrian aristocratic families , the so-called " Apostles ". Around 1136, Hugo von Liechtenstein was first mentioned as a bearer of this name. The house has over a hundred members, only some of whom live in the Principality of Liechtenstein .

The name Liechtenstein probably comes from the Liechtenstein Castle in Maria Enzersdorf south of Vienna . The early Liechtensteiners owned land in the vicinity of this ancestral castle and on the northeastern border of Lower Austria .

In the Duchy of Austria , the Bohemian king's son and later King Ottokar II. Přemysl , who had married a Babenberg woman, succeeded in temporarily taking over power after the male Babenbergs died out in 1246 . The historically verifiable line of ancestors of the Austrian noble family Liechtenstein begins with Heinrich I von Liechtenstein († 1265), who in 1249 received the rule of Nikolsburg in South Moravia from Ottokar II, whom he supported politically, as free property.

The donation was of great importance for the history of the Liechtenstein family because it gave the family, in addition to their possessions in Austria, well-known properties in the area of ​​the Bohemian lands , which did not come to the Habsburgs until 1526.

However, when the German King Rudolf von Habsburg denied the legitimacy of Ottokar II's rule in Austria, Heinrich I's son Heinrich II sided with the Habsburgs, who remained victorious in the battle on the Marchfeld between Dürnkrut and Jedenspeigen in 1278 . As a result, the Liechtensteiners were mostly loyal allies of the Habsburgs until 1918 and were rewarded accordingly for their loyalty. 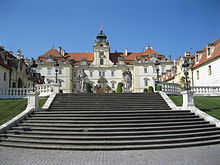 Feldsberg Castle , Czech Republic, the main residence of the princes until 1938, expropriated in 1946

Liechtenstein Garden Palace in the Vienna suburb of Rossau , today in the 9th district, painted by Canaletto around 1759/1760 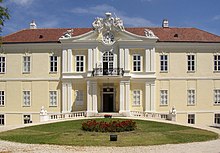 Vaduz Castle , Principality of Liechtenstein , official residence of the princes since 1938

The importance of the rule of Nikolsburg was to prove itself in 1394, when Johann I von Liechtenstein (Hans von Liechtenstein), who for almost 30 years as court master the government business of Duke Albrecht III. led by Austria, fell out of favor and, together with his family, was forced to give up some of their possessions, especially those south of the Danube . In the following decades the family tried to consolidate the Lower Austrian property through new acquisitions; also the (today South Moravian) dominium around Feldsberg was further expanded.

In the 13th century the family divided into the Liechtenstein, Rohrauer and Petroneller lines. The last two lines mentioned died out in the next generation in the male line. Her heiresses had married into other families; Much valuable family property was lost to the Liechtensteiners as a result.

There was another division at the beginning of the 16th century, when a Steyregger , a Feldsberger and a Nikolsburger line formed with the family contract of 1504 . Of these, however, only the Feldsberg line continued. From now on, family laws ensured that ownership of dying lines passed to the surviving line.

At the turn of the 16th to the 17th century, the three brothers Karl , Maximilian and Gundakar ushered in a new period in family history. The nobility and population in Austria, Hungary and Bohemia had largely switched to Protestantism during the Reformation in the 16th century ; However, at the right time before the outbreak of the Thirty Years' War , the three brothers converted back to the Catholic faith, which the Habsburgs had always preserved, who until 1806 provided the Roman-German Emperor almost continuously .

In 1606, Charles received the great Count Palatine from Emperor Rudolf II , and in 1608 the hereditary prince. In 1613, Emperor Matthias awarded him the title Duke of Troppau and Jägerndorf , which every ruling prince has held ever since. With the intervention of Karl and Maximilian, appointed field marshal , Emperor Ferdinand II was able to achieve the decisive victory over the Bohemian rebels in 1620 . Maximilian and Gundakar were therefore elevated to the hereditary imperial prince status by him in 1623 . Maximilian and his wife founded a Paulaner monastery in Wranau in 1633 , where the burial place for the House of Liechtenstein was laid. (The current building on the terrace below the church was built in Empire style in 1812–1815. Almost all the princes from the House of Liechtenstein were buried here. It was not until 1960 that a new crypt was built for the princely family at the Cathedral of St. Florin (Vaduz) . )

The three brothers succeeded in enlarging the Liechtenstein property many times over, especially since Charles became governor and viceroy of Bohemia in 1622 ; As such, the emperor authorized him to annex so-called rebel estates in order to settle the credit debts he owed the prince , i.e. the lands of the (mostly Protestant) landowners who had fled since the outbreak of the uprising of 1618 and which the governor expropriated and given to the emperor sold to himself at low prices, which greatly increased his land holdings. In 1625, Gundakar received the Ostroh dominion with the Kunowitz and Hluk estates from the emperor, as well as several villages, which remained in the family's possession until 1945.

As early as 1606, the three brothers had signed a new family contract, with which the common property was brought into a Fideikommiss . The first-born of the oldest line was now entitled to the hereditary title, represented the family externally as head of the house and administered the family assets, which no longer belong to him personally, from which the lives of all family members were financed.

The provisions of this treaty and other provisions were summarized in 1993 in the new Liechtenstein House Law (according to today's legal understanding, a family contract that can also have constitutional effects in a ruling dynasty), which forms the basis for the right of succession to the throne in the Principality of Liechtenstein.

In addition to Feldsberg , the princely family also had a residence in this neighboring Eisgrub and connected the two castles with a mostly straight avenue.

Ever since the dignity of the imperial prince was acquired, the House of Liechtenstein has endeavored to acquire territory directly from the empire . In contrast to their previous possessions, they wanted to be subordinate to the Habsburgs only in their capacity as emperors and not also as sovereigns and thus to be able to appear on an equal footing with other sovereigns of the empire.

But it took almost a hundred years before Karl's grandson, Prince Hans Adam I (1657–1712), had the opportunity to buy the Schellenberg and Vaduz estates in 1699 and 1712 . After his line died out, Anton Florian , a descendant of Gundakar, became the ruling prince in 1712 . (All family members living today are descended from Prince Johann I. Josef , 1760–1836.)

With the expiry of the empire in 1806, the Principality of Liechtenstein was sovereign and was recognized in this status by the Congress of Vienna in 1814/1815. The infrastructure was based on Austria: the railway line in Liechtenstein, like the postal system, was operated by the relevant Austrian state institutions on behalf of the Principality; There was close cooperation in the judiciary, and the Austrian kroner currency was legal tender.

As one of three sovereign royal houses, the Liechtenstein family held a hereditary seat in the manor house , the upper house of the Austrian Imperial Council, in the 19th century and until 1918 . Liechtensteiners were repeatedly appointed by the Habsburg emperors to high political positions in the Habsburg hereditary lands , the Austrian Empire founded in 1804 and the Austro-Hungarian monarchy created in 1867 . To mention are among others:

For a long time, their own principality was on the verge of the interests of the Liechtenstein dynasty; many family members never got to know the principality. This changed when the monarchy in Austria came to an end in 1918 and Prince Johann II brought his country closer to Switzerland , with which a customs union was concluded in 1924. Nevertheless, the family continued to reside largely in Feldsberg , which has been Moravian and thus Czechoslovakian since 1919, and in Vienna.

With the annexation of Austria to the German Reich and the Munich Agreement in 1938, which also made Feldsberg and Eisgrub part of the Reich, the principality became the focus of the family: Prince Franz Josef II (1906–1989) moved his permanent residence to 1938 Vaduz; his country remained neutral with Switzerland during World War II. The loss of the possessions in Czechoslovakia in 1945 - Edvard Beneš expropriated the Liechtensteiners as well as the Germans - contributed to the fact that the princely family's own principality remained the main residence of the princely family, even if many family members still live in Austria and the Liechtensteiners manage their estates in Austria , including Wilfersdorf Castle and the various side branches belonging to Riegersburg , Waldstein and Hollenegg estates .

Since the expropriation of the House of Liechtenstein in Czechoslovakia by the Beneš decrees in 1946, without compensation , its Moravian possessions remained the property of the first Czechoslovak and later the Czech state. All political and judicial efforts of Prince Hans Adam II - after the end of the communist dictatorship in 1990 - to return the expropriated property (in addition to the Feldsberg , Eisgrub and Groß Ullersdorf castles, another 14 castles, 1,600 square kilometers of land - i.e. 2% of the total area of ​​the Czech Republic and ten times the area of ​​Liechtenstein - as well as various industrial companies) failed due to the resistance of the Czech government, which even denied the Principality of Liechtenstein diplomatic recognition as a state in order to maintain Beneš's legal position.

The Prince is the head of the Principality of Liechtenstein and the Princely House and, in accordance with the House Law, oversees its “reputation, honor and welfare”. After the death of Prince Franz Josef II on November 13, 1989, Hans-Adam II became Prince, but he took over the government about five years earlier when he was appointed regent by his father. He is characterized above all by great business acumen and restored the solid economic basis of the house, which had suffered so severely from the expropriations of 1946 that the famous art collection had to serve as an "nest egg" at times. He achieved this primarily through the establishment and international orientation of the private bank LGT Group . Since then, he has also been able to supplement the art collection with acquisitions, which he made available to the public in the Liechtenstein Museum in Vienna in 2004 , and in regular special exhibitions at the Liechtenstein Art Museum in Vaduz. Since 2004, Hereditary Prince Alois has been the prince's deputy as head of state.

The Princely Family elects a family council every five years, which primarily acts as an appeal body for decisions within the framework of the house law.

Ownership of branch lines of the House of Liechtenstein in Austria

Prince Johann I Joseph acquired several dominations in Styria and Carinthia, which he his younger sons as Sekundogenitur- and Tertiogenitur- fideicommissum donated and are which are still owned by younger lines of the House of Liechtenstein: 1820 Hollenegg Castle and Castle Frauental with the associated manors for the son Franz de Paula , in 1823 for Prince Karl Johann Anton the Burg Neulengbach (sold in 1920) and in 1831 for Prince Frederick the Schloss Rosegg in Carinthia. He also acquired the Riegersburg in 1822 . The Kornberg and Kirchberg an der Raab castles acquired in 1821 were later sold again. Waldstein Castle was acquired in 1912 . In 1986, Princess Clothilde bought the Swabian Altenberg Castle in Syrgenstein .

Noble families of the same name

There was also a wealthy and influential ministerial family in Styria who named themselves after their ancestral seat, Liechtenstein Castle, southeast of Judenburg (today a ruin, but since 1814 in the possession of the Princely House); This family is not related to the Princely House, a ministerial family of the Babenbergs from Liechtenstein Castle south of Vienna , but is descended from the noble lords of Traisen and Reidling. These Styrian Liechtensteiners included:

Another noble family Liechtenstein-Kastelkorn existed in South Tyrol (ancestral castle of the same name in Leifers near Bozen ) and later also in Moravia, a family Lichtenstein in Franconia and another in the Swabian castle Alt-Lichtenstein .