Uherský Ostroh is located in Moravian Slovakia in the Upper Moravian Valley ( Hornomoravský úval ) the March , which flows west of the city towards the south. Neighboring towns are Uherské Hradiště in the north, Kunovice and Ostrožská Nová Ves in the northeast, Ostrožská Lhota and Hluk in the east, Blatnice pod Svatým Antonínkem in the southeast, Veselí nad Moravou in the south and Moravský Písek in the west. To the south are the White Carpathians .

Ostroh was created on an island around which the March flowed. Presumably under Ottokar II. Přemysl a royal castle was built to secure the border with Hungary. It was first mentioned in 1286 as "Stenice Castle" and then referred to as "Ostroh" ( spur ) or "Ostrov" ( island ). During the reign of the Bohemian King John of Luxembourg , the castle was pledged, but remained royal property until the beginning of the 16th century.

The town of Ostroh that grew up around the castle was first mentioned in 1371 as belonging to the castle rule. In 1405 the Moravian margraves Jost and Prokop Ostroh pledged to the brothers Beneš and Hašek von Waldstein . According to a feudal certificate issued by King Wenceslaus , Ostroh owned Hašek von Waldstein alone in 1411 . He fought as a general in 1420 on the side of King Sigismund at the Battle of Vyšehrad and was captured by the Hussites . Presumably because the Hussites threatened to take away his possessions, he went over to the side of the moderate Prague Hussites, who appointed him their commander in January 1422. They designated Ostroh Castle, which they called "The New Tabor", as their military center in south-east Moravia. From here they attacked the Velehrad monastery on January 12, 1421 and burned it down. In the same year, the Olomouc bishop Johann von Bucca tried to recapture Ostroh with Austrian armies without success. After further unsuccessful attempts by the imperial family, Duke Albrecht did not succeed in conquering the city until 1424 . In the same year he handed Ostroh to the Hungarian magnate Stibor ( Stibor ze Stibořic ), from whom it came to the former Hussite captain Friedrich von Ostrorog . Although Hašek von Waldstein again joined King Sigismund's side after the defeat of the Hussites in the Battle of Maleschau and was appointed Moravian governor , he never got Ostroh back.

During the reign of Friedrich von Ostrorog, the subjects were charged with excessive taxes and compulsory labor, which is why they turned to King Sigismund with a complaint. In 1435, Sigismund confirmed the previous city privileges and freed the subjects from the unjustified demands of Friedrich von Ostrorog. In the second half of the 15th century, Ostroh came to Johann Giskra ( Jan Jiskra z Brandysa ) as pledge , who left it to Jan von Cimburg ( Jan z Cimburka ). This exchanged castle and rule Ostroh with the Lords of Landstein . As a result of the Bohemian-Hungarian War of Succession to the throne, Ostroh came to allies of the Hungarian King Matthias Corvinus in 1468 . Its captain Jan Zelený von Šanov succeeded Peter Haugwitz von Biskupitz as the owner of Ostroh . He sold Ostroh in 1490 to the Olomouc administrator Johann Filipec , who was one of Matthias Corvinus' advisors and diplomats. Filipec prescribed Ostroh to his nephew Jan von Kunowitz ( Jan z Kunovice ) in the same year . He sold Ostroh in 1497 to Mikuláš Hrdý z Klokočné and bought it back after his death in 1509. From 1511 Ostroh no longer belonged to the royal estates, making it hereditary to the von Kunowitz family. 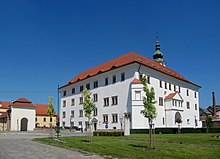 In the Thirty Years War Ostroh was conquered by the Swedes under General Lennart Torstensson in 1645 . In the second half of the 17th century, the area suffered harassment from forays by Hungarians and Turks . Ostroh suffered further damage in 1757 during the occupation by the Prussians in the Seven Years' War and in 1762 by a large city fire. Since the Liechtensteiners did not reside in Ostroh, the economic importance declined and the castle gradually fell into disrepair. A Jewish community has been recorded since the 16th century, which later built a school and a synagogue , which was destroyed in 1944.

In 1838 Ostroh consisted of 177 houses with 1,185 inhabitants. It was not until 1846 that Ostroh was given the name "Hungarian Ostroh" ( Uherský Ostroh ). In 1850 the city became the seat of a district court. With the railway connection in 1888 an economic boom followed. In 1894 Karl Latzmann founded a pencil factory whose stationery products were delivered to Russia and Romania. At the beginning of the 20th century, factories were established to manufacture furniture. In 1938 the city acquired the castle. In 1990 the city center was placed under monument protection.

Uherský Ostroh main square with the castle in the background